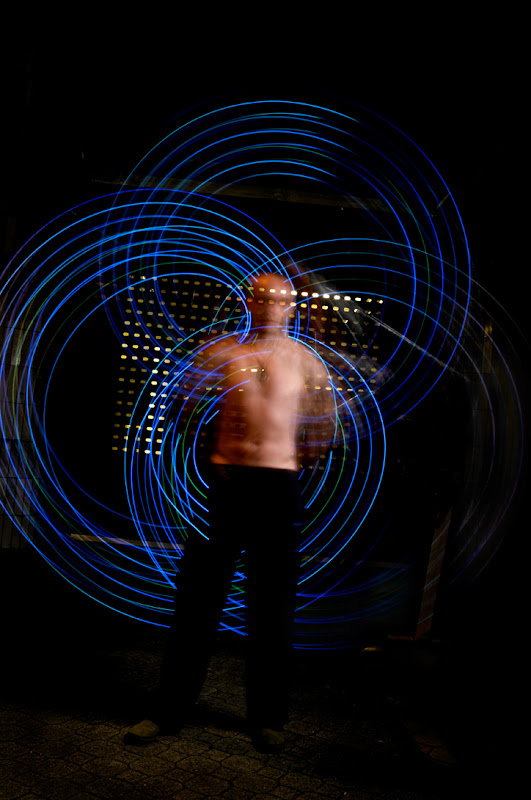 I wanted LEDs along the entire length. After messing around with various layouts, I went for something simple, batteries at the ends, computer in the middle and light boards along the rest. The staff overall is 1500 mm, the ends with connectors and batteries were squeezed down to 100 mm each, the main board in the centre is 150 mm length, leaving 1150 mm for the light boards.

The LEDs are back-to-back but don’t emit over 180 degrees each, it’s more like 120 degrees, so the light isn’t that even. What the hell, it still kicks out plenty of photons.

The physical structure is easy, it’s a big tube. The electronics go inside, the weight of the batteries go as close to the ends as possible, there’s some end caps to hold it in place, and a single strip of circuits boards inside the tube, holding the LEDs and other gubbins.

For the tube, transparent plastics are pretty much limited to acrylic and polycarbonate. Acrylic is stiffer but much more brittle; polycarbonate is used for riot shields, it’s that tough. So this one was a no-brainer, polycarbonate it is.

In the end, I decided that my hands have a hard time holding a tube of more than 32 mm outside diameter. Well, I can hold larger tubes, but when it comes to trying to catch a wet tube with muddy hands in the dark at a festival, then 32 is about the limit. That fits with a thick walled tube (3.2 mm thick) to get some stiffness and still leaves 25.4 mm into which all the electronics could fit. It’s not as stiff as I’d like, it’s noticeably floppier than my thin aluminium fire staff, but it’s bearable.

Structural strength:
Polycarbonate is very strong, provided you have no stress concentrators, i.e. no scratches, no sharp internal corners. This means no holes in the wall of the tube. This limits all connections for power, programming, and sensors to the ends. This is a further pain in the arse as the ends rapidly get very congested.

Thus mounting all the internal gubbins becomes a problem. I went for expanding o-rings, squeezed against the inside of the tube by via a socket head screw buried in the ends.

So far, this tube hasn’t broken. I’m pretty sure that if I could use this staff to beat the crap out of any nearby object and I’d give up before the staff did. Of course, all the delicate electronics inside would be dust well before that point, but it’s good to know I can drop it without damaging the structure.

Also, that much polycarbonate is pricey, I paid NZ$180 for this one tube. Oww.

Polycarbonate scratches easily and is very slippery. I went for clear heatshrink to protect it and to give a good grip. It’s not as sticky as the tennis grip I use on other contact staffs, but it’s the best transparent material I’ve found (although it gets very slippery when wet). The trick to applying it is to start at the centre and work out slowly, using a hair dryer to shrink the stuff, to avoid wrinkles as it shrinks.

This is a pretty big size for heatshrink. I had to order it as an expensive five metre length from either RS Components or Farnell/Digikey/Element14 (whatever they’re called this week).

Making the ends was a pain in the arse. They need to be precise, detailed and strong. They also need to hold the connectors, to squeeze an o-ring against the inside of the tube, and to mount the batteries and connect to all the internal gubbins. This ends up with very complicated design, with multiple internal cavities to hold nuts, washers, and sockets. 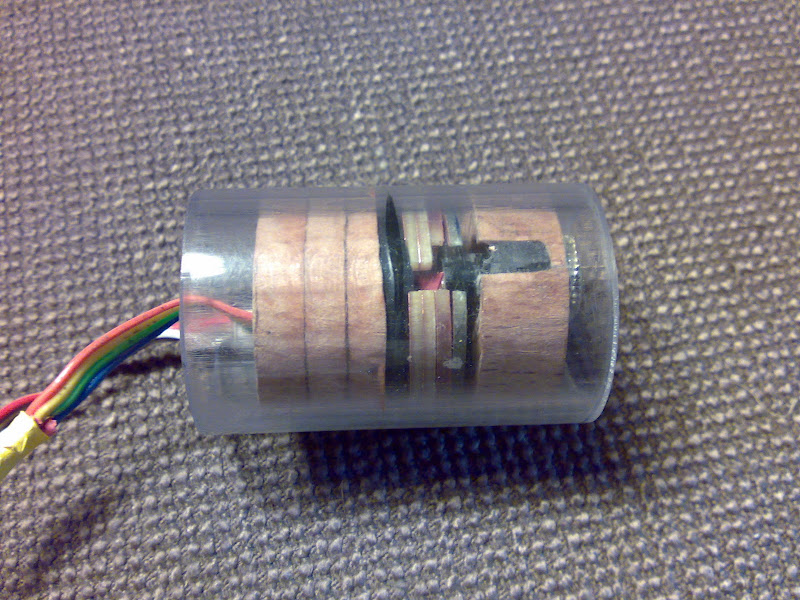 I made these out of fine-grained hardwood discs, cut to shape, and the stacked. I replaced those parts with scrap circuit board when they broke. If I was going to do this again (and I am) then I’d have paid someone else to 3D print the complicated shapes, or to laser cut discs that could be stacked into the correct shapes. 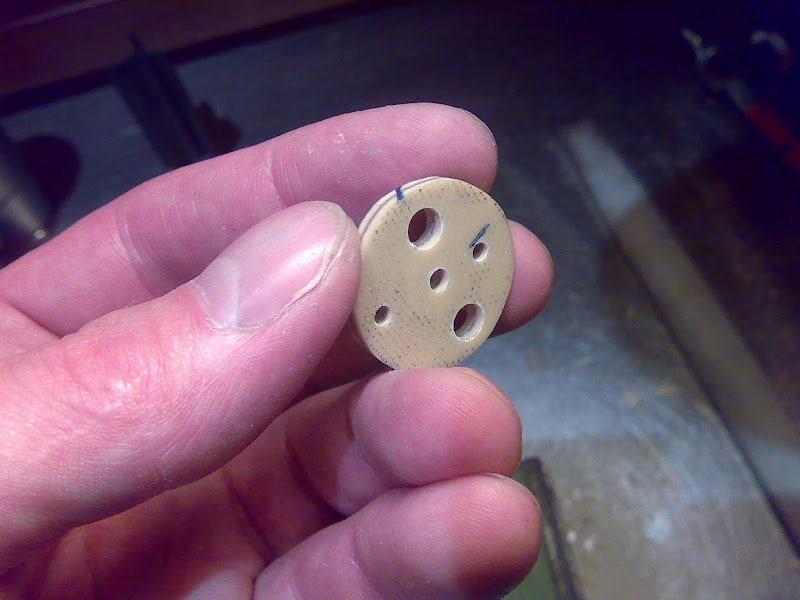 The aim was to have as much weight as possible in the ends of the tubes, for smoothness of spinning. Batteries are heavy, so they should go in the ends, right? Well, they don’t add much weight, but that’s where they ended up.

Still, four cells into 5V is a pain in the arse, requiring both a step-up and a step-down power supply if you’re going to do it properly. Putting two strings of NiMH batteries in parallel also isn’t recommended and does nasty things to the batteries. More about this on the POWER page.

There’s room between on the batteries on the outside to pass through the cables, just. It doesn’t look pretty.

The ends tighten against the tube using a captive bolt in one part of the end and a captive nut in the other part. However, you can only turn the bolt if the end is tight against the tube, otherwise turning the bolt just turns nut and the whole end. Oops, it’s one of those “you can’t get there from here” problems. The solution was a little square-section brass tube from the end to the circuit boards inside. This resists the torque from tightening the bolt. It just fits along the space between the four batteries (strictly, it’s an astroid. It’s also a piece of conductive metal resting just between batteries and I was expecting it to cause shorts. The geometry is such that it can’t touch, or at least it hasn’t yet. The only thing holding the batteries apart from the brass is their labels, so one day they may wear through and the LED staff will become a fire staff, briefly. 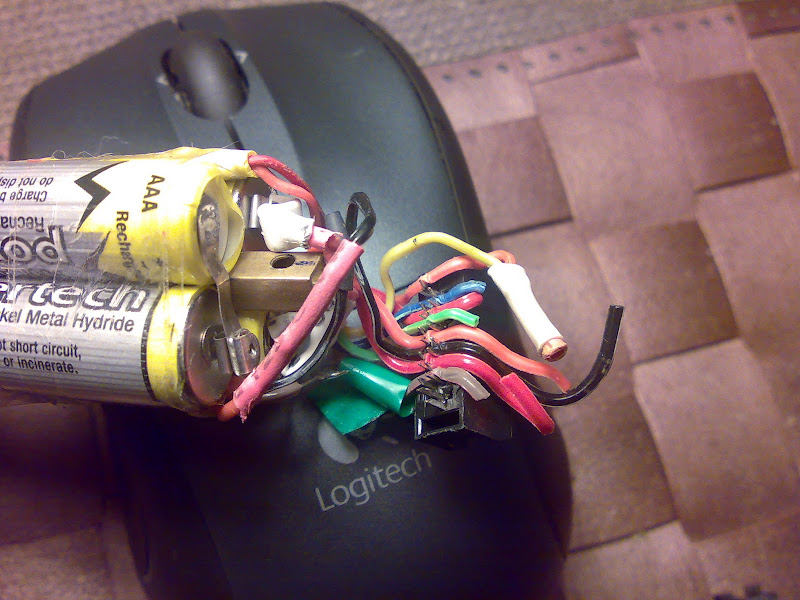 The ends of the polycarbonate are reinforced by the closely-fitting end pieces, but still, eventually it’d get shagged. Thus I shrunk on some disposable buffers. These are PVC tubing, as that’s the only transparent flexible material I could find in that size. The original aim was to glue them on, but I’ve yet to find a glue that works for both polycarbonate and PVC. Currently it uses silicone, but the adhesion is poor. What mainly holds them on is shrinkage. Before attaching them, I sat the PVC in boiling water to expand it. Slide it on and it shrinks and grips (reasonably well). My excuse here is that they need to be replaceable, and they’re held on well enough that that don’t come off when spinning. 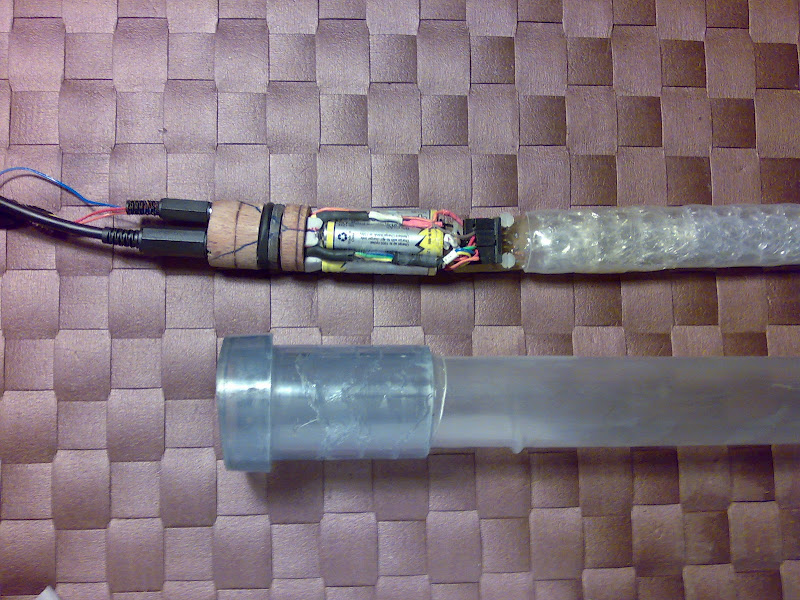 I drop things. I drop them a lot. Delicate electronics doesn’t like being dropped. So, how to make this bombproof?

1) No loose components – the only free parts at the wires at the ends and even those are reasonably well tied down.

3) Make everything equally dense – Again, this avoids stress concentrations. The internal bolts could be steel, but a dense piece of steel against a circuit board will cause more load on that board than a nylon bolt.

4) Solder is not a structural material, nor is wire – Anything that can be done to take mechanical loads off soldered or wired joints should be done. For instance, the connectors between boards all have bolted backing plates.

5) Hardwire everything – the batteries are tagged and soldered straight to the main bus. There’s no power switch (there’s no room for one anyway). This means that the whole thing can’t be turned off, so there’s a reset port at one end, where poking a shorted jack plug pulls the reset line of the microcontroller to ground, letting me reset it without having to take the whole thing apart.

5) Fill air spaces – ultimately, I should pot this, so that everything is equally solid and supported. The drawback with potting is that it then becomes impossible to take apart and repair, so one broken connection means throwing the whole thing away. Instead, the driver boards are covered in bubble wrap, which is then held on with clear heatshrink. This gives some padding and also diffuses the light from the LEDs a little.

I don’t have the perfect solution here, other than filling the entire thing with some inert fluorocarbon liquid.