The 144 LED per metre LED strips are stunning. The LEDs are close enough that they blur into a single bar of light. Sadly, the LEDs are close enough that joining the strips is a nightmare. The pads are tiny, joints are sketchy, the LEDs too close together to get an iron in there, and it’s easy to overheat and damage the LEDs. And I’ve had to make up four 1.4 metre lengths for the Mitochondrion LED staff, requiring joints in each.

So after much swearing and head-scratching I’ve come up with a better technique for joining them – sew them before you solder.

This applies to both NeoPixel and DotStar (APA102C) strips.

First up, cut the strips to leave whole pads. Don’t cut in the middle between LEDs, cut to one side. Yes, this means that the first LED on the part of the strip you are cutting off is now useless, but hey, you only lose one LED. I found cutting with a knife on a chopping board worked for me, my snips are far too large for this. The strips I’m using had adhesive on their backs, I scraped this off. The ends should look like: 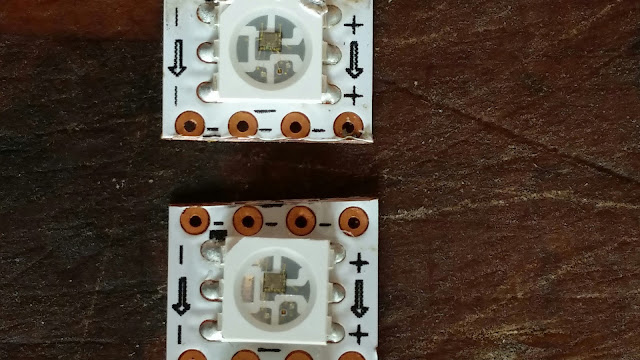 Then make up a jig to hold the two ends in position, leaving both sides free. The ends of the strips should just butt together, for reasons that will become obvious. I only have one vice, so I used a clamp and some blocks from the workshop: 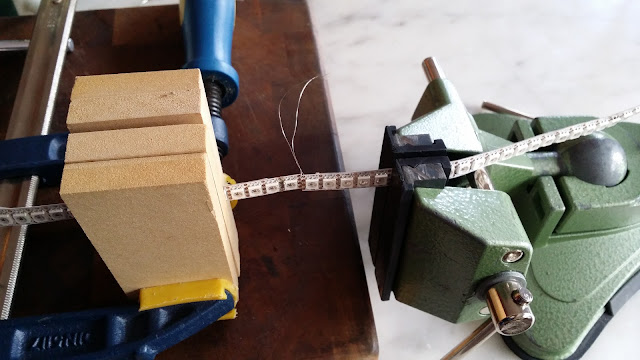 The next step is the fiddly one. I cut a length of multi-stranded hook-up wire, stripped the insulation off, and pulled out a single strand. I fed this through the holes in the pads and wove it back and forth. You could just make a simple loop, but that would leave the strip ends free to move and overlap. Instead, I wove some of the loops in a figure of eight pattern, with the strand crossing sides between the ends of the strips. This pattern can be tightened onto the pads and holds the strip ends against each other. Tweezers help. A picture is probably clearer than words, click to enbiggen to make it even clearer: 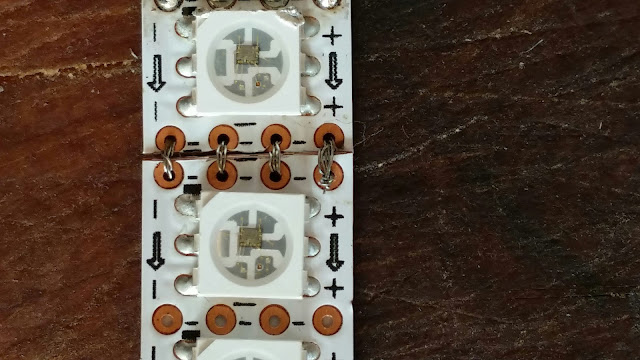 Getting the strand between the ends is easy, provided you start the sewing at one side of the strips and work across. That way you can hold the strand tight and pull it between the strip ends. Once I’d done a reasonable wrap, I took both loose ends of the strand to the back side, twisted them together a few times, cut them short and bent the ends down: 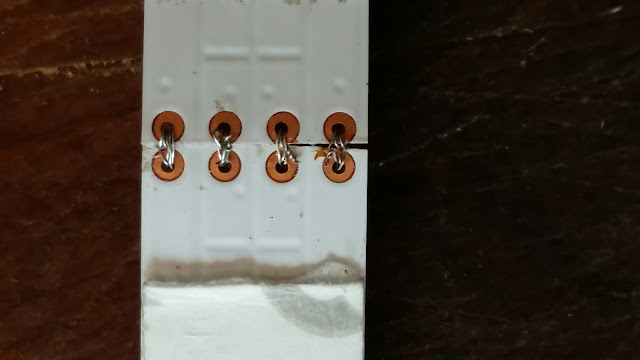 Now that the strips are held to each other and there is wire between the pads, soldering is a piece of cake: 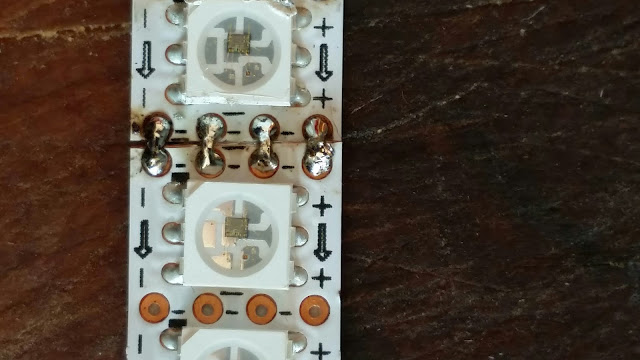 And this is with a dirt-cheap, no-temperature control, medium-size soldering iron. I’ve yet to have a failed joint with this technique: 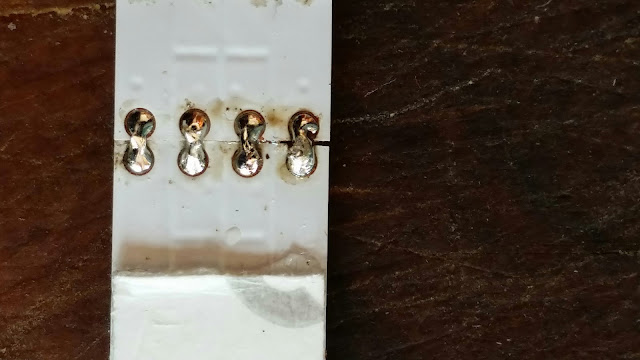 Bonus notes:
1) This technique does require an additional 1 mm between LEDs. This leaves a tiny, tiny gap. When the LEDs are on, I can’t spot the gap. If that isn’t good enough, then you could use the wire technique to overlap the pads directly and tie them together, but that’d require more complicated knots.
2) These joints are still just solder, so I wouldn’t bend them too much. Thick tape on the back of the joint seems like a good idea.
3) I really should write up my bombproof LED driver design.