We’ll be working at the house again tomorrow, earth plastering and assorted other jobs. Any assistance welcome.

However, now that I’m up there two days in the week, we’ll be taking Sundays off, as the Good Lord intended.*

Given that we’ve now 4-6 people up there each day in the week, we’re cracking on somewhat. Yesterday was the last of the gib board and connecting up drains. We’re finishing off interior surfaces and final utilities. Yup, the house is rapidly heading towards being done. Holy crap! So, if you’re wanting to help, then the next month or so will be your only chance.**

In other news, I’ve reached the cultural sophistication of homo habilis – I made this special tool for poking things into cracks. Random piece of steel, hammered straightish, a chunk of tree branch for a handle, screw them together, poke away. (Actually, Cliff the Builder told me how to make it, thus we have evidence of the cultural transmission of knowledge about tool-making, placing us as roughly the sophistication level of chimps or capuchin monkeys). Anyway, poky tool: 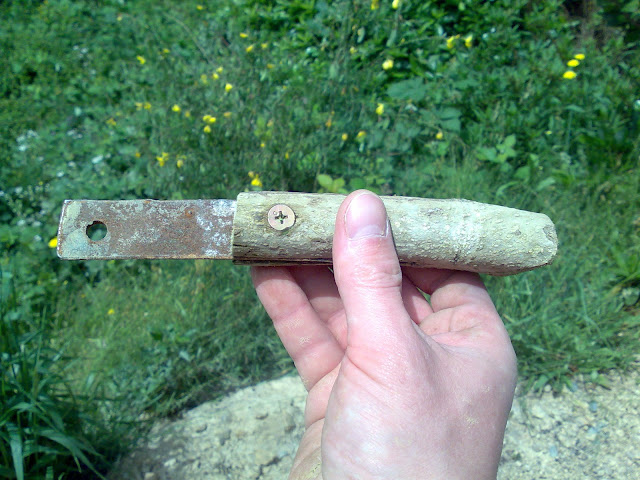 * – The Good Lord here being Warren Ellis, who spends his Sundays recovering from Saturday night’s oil-tanker worth of whisky, or so I’m told.
** – Who am I kidding? We’re going to get the house into a liveable state so we can move in and stop paying rent, but then there’ll be plenty more to be done on the house. Hell, then there’ll be the garden after that, although that might wait until we’ve chilled out a bit.