A week of visible progress

I’m having a week where plenty of projects are coming to fruition, Nerd Nite, the sea level rise paper, and mark 2 of the glow fans.

With the much appreciated help of several, I got the big power supply running (previous head-scratching), wired up the LED driver (MAX16836 350 mA constant current), and fired up the LEDs (Cree MC-E RGBW). This is what happens when the phone on my camera fails to cope with 60 lumens of red photons: 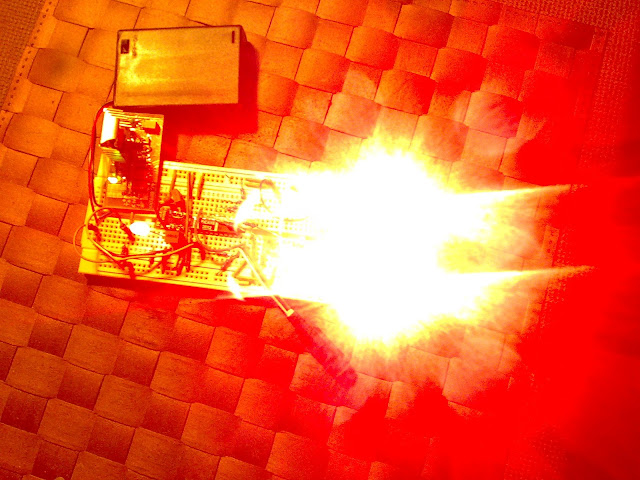 They are ridiculously bright. You can’t look directly at them, even from across the room. It hurts to look near them. I like.

(I’m still after a single chip that can drive all four colours in one of these LEDs, controlled off I2C, with at least a hundred chips on a single I2C bus, and PWM frequencies of 1 kHz or more, in a hand-solderable package. Yeah, I’m picky.)

The sea level rise paper resulted in a section on Close Up last night. For those not in NZ, that’s TV One’s 7 pm current affairs flagship. Admittedly, we also had the Greenhouse Policy Coalition there too (representing NZ’s big industrial emitters), but it was a reasonable piece, or as reasonable as we’re going to get in the NZ media.

So yes, lots of visible progress this week, getting things finished off and having something to show for it. Thus I’m taking today off to put my feet up (and maybe write some code).

14 thoughts on “A week of visible progress”