Yet again, I’m failing to get a step-up converter to work. This one is a MAX608, aiming to give me 7 Volts and 500 mA from two NiMH cells (datasheet). I’ve rebuilt it three times, smaller each time, and it is doing something, but not what I want it to do. Symptoms are:
1) Not exploding, which is good.
2) Responding to the shutdown/enable pin.
3) Producing a 50 kHz waveform on the EXT pin that drives the MOSFET.
4) Producing some voltage, around 2.1 V. This is seems to be just the battery voltage, less the diode drop.
5) The output voltage is controlled by a feedback voltage divider. Shorting this to ground should give a set 5 V output. It doesn’t change the output at all. 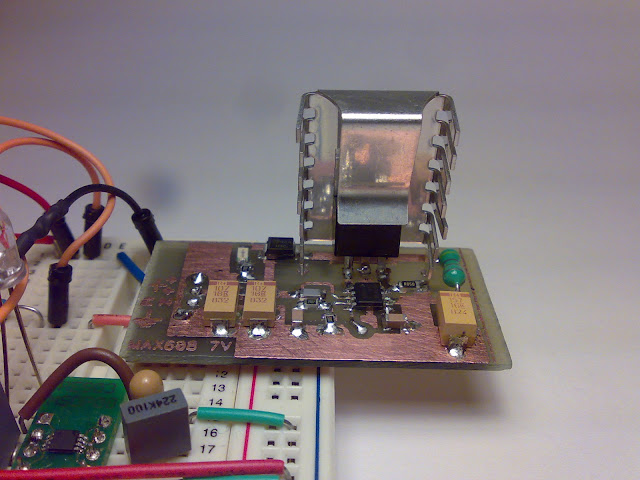 The square wave on the gate drive pin looks like what it should look like, only I think the high voltage should be VOut, i.e. 7 V. It’s 2.1V, the VIn from the bateries, minus the voltage drop over the diode. The MAX608 uses a PFM switching scheme, with a maximum on -time of 16 us. That’s what I’m getting. The maximum off-time is 2.3 us, this is giving me 3.4 us. So something’s happening. These times are controlled by the current limiting control scheme, so I’m guessing there’s a problem with the current? (Note: the important word here is “guessing”.) At least something’s going on here:

The MOSFET drain/inductor/diode voltage has spikes when switching is taking place, but I’m buggered if I know what this means:

So it appears to me that umm… dunno. Current hands in the air hypothesis is that there’s a problem with the inductor. The inductor isn’t inducting enough, or it is inducting too much. I don’t know what inductors do. Or rather, I can give you the standard A-level electronics answer – they store energy in a magnetic field, and the voltage they produce depends upon the rate of change of current. However, knowing what it is supposed to do is very different from knowing why it’s not doing what it is supposed to do. It appears to be behaving like a piece of wire.

In fact, bypassing it with a piece of wire does nothing except remove the spikes on the drain voltage. So the inductor is doing approximately bugger all.

The inductor I’ve got is whatever RF choke that Jaycar had. I’m using it coz one like it worked in a previous step-up. The ratings are DC Inductance: 22uH Rated Resistance: 0.84ohms DC Current Max: 410mA). I don’t know if any of these numbers are important, but the inductors suggested on the datasheet have full load currents of >1 Amp, DC resistance <0.16 Ohms. So this inductor may not be what's needed. My reading of the datasheet suggests that the inductor's saturation current should be greater than the output, which is should be about 500 mA. Farnell has inductors in a similar package with same inductance, 3 Amp rating, and ferrite core material, so I could try that? But there's lots of guessing here, how do I tell what inductor I need? Alternatively, have I completely misinterpreted the info I have about what this circuit is doing, or not doing, and is there an entirely different reason why I'm getting what I'm getting? Also, Farnell has a $10 minimum order and this inductor costs $3. Anyone want anything? Anyway, thanks to lots of help we have more earth floor: 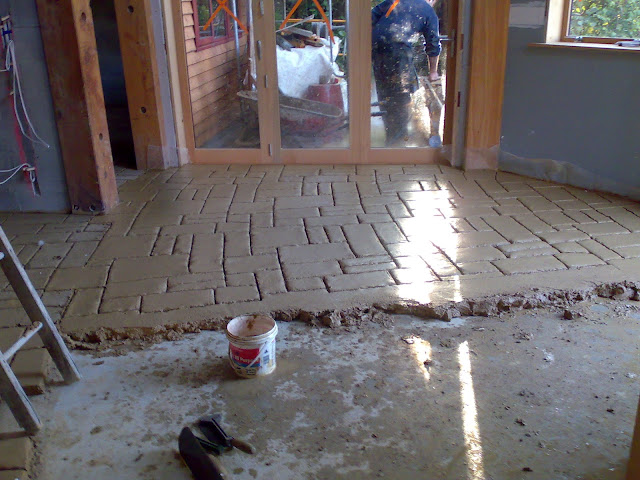