How to lay a poured earth floor

We’ve been laying a poured earth floor. This is going to cover the whole floor on the main level of the house. It’s an extra two inches of thermal mass to store the heat and the one’s we’ve seen before look awesome. Kind of like flagstone, but much warmer underfoot.

The earth mix comes from clay from the site, more clay from Cliff’s place, and some gravel from the quarry just down the road. I think the current mix is 24 shovels of Cliff’s clay, 12 of gravel, and 2 buckets of ours. Here’s Jarrod utilising the precision measuring equipment: 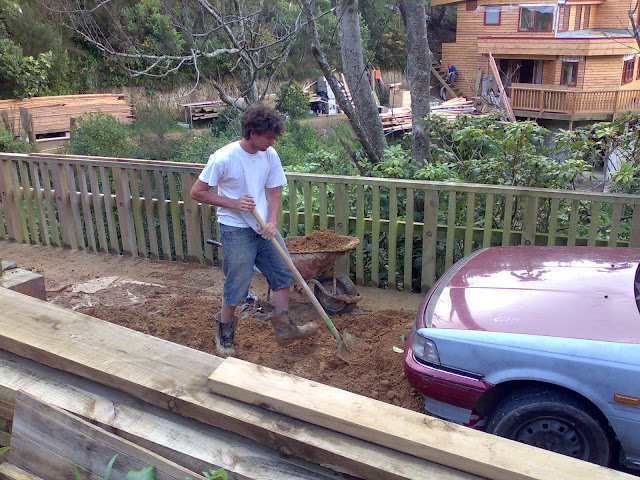 Roel & Annelea are two WWOOFers who have been staying with a chap in Foxton who has a poured earth floor. They plan to build their house at some point in the future, so came along to help out and learn how this is done. Cheers! Here’s Roel loading the mixing trough. 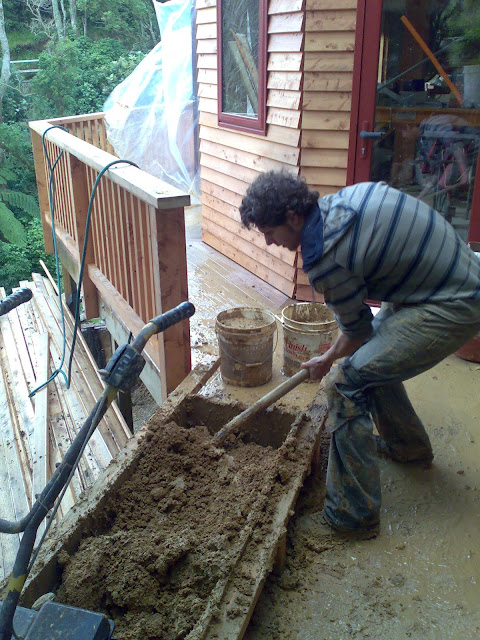 The mixing takes place in this trough, using a rotary hoe. We tried a concrete mixer, but the mix is so stiff and sticky that it just sits in a ball, rolling around in the mixer. The hoe works much better, shearing the mix. This stage is messy. 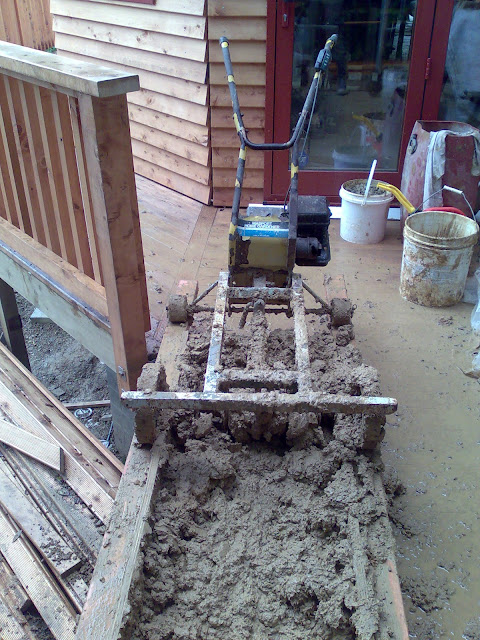 You mix it up until all the clods clay are broken down, the mix is smooth, sticky, goes where you put it, and stays there. Then you plonk it down on the floor, ready to spread out. Plonk is the technical term here. 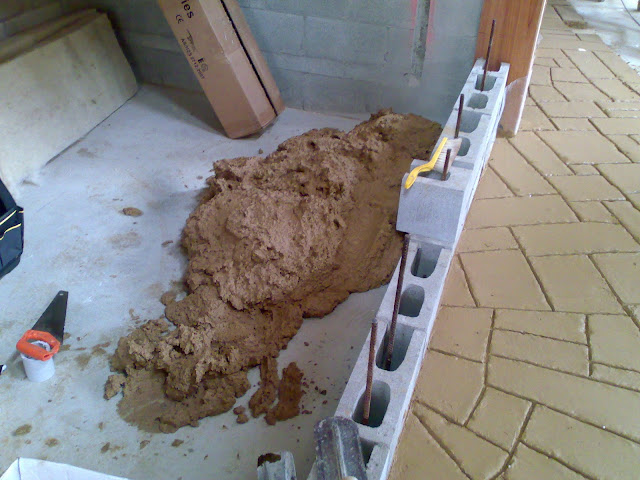 The mix is spread out using floats to a two inch thick layer. The steel moulds are pressed in to make a flagstone pattern. This isn’t just decorative, the earth shrinks as it dries and the shrinkage causes cracking. The moulds ensure it cracks in the right places, which then get filled with an earth mortar later. 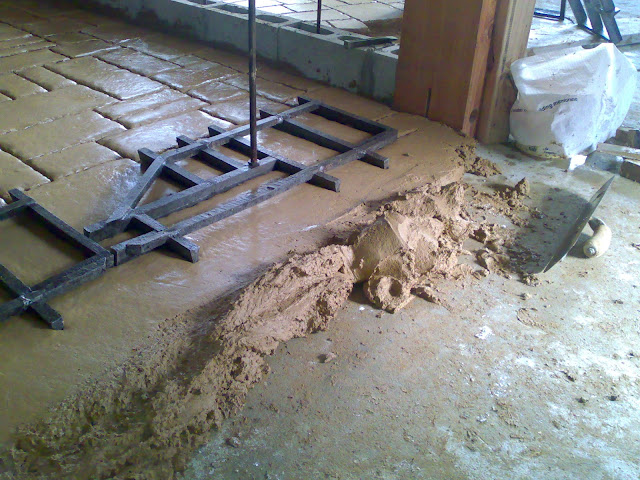 We were originally planning on a square layout, with the pattern meeting the walls square. Cliff & Andrea stood scratching their heads for a while, looking at how people will flow through the house, then suggested something different. It’s a bit daring, but what the hell, we’ll give it a go. If it doesn’t work, we can always take it out. It means Cliff gets to be more creative in laying out the pattern, stretching it into and out of the corners. 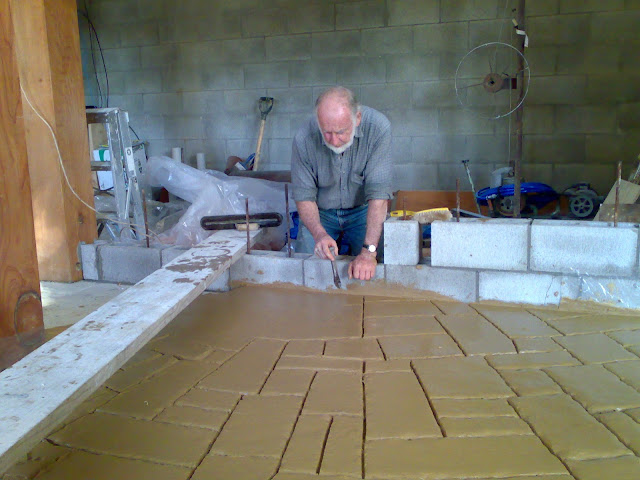 Progress so far. When the floor is done, we just have to leave it for about six weeks to dry. Then we oil and wax it and after that there’ll probably be some rolling around on it. 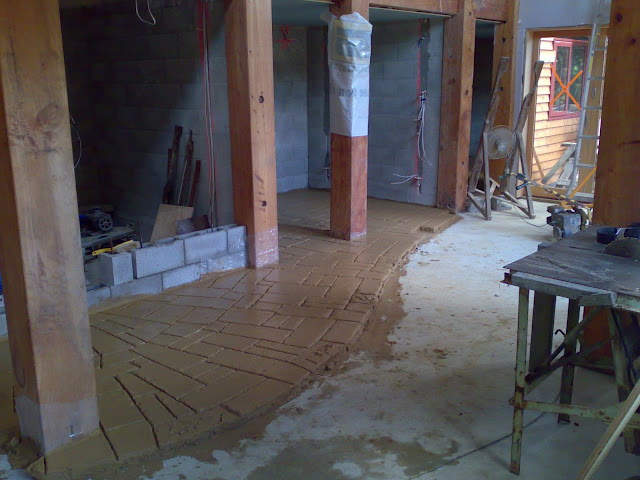 Jarrod’s dog Kita had to sign the floor as well. 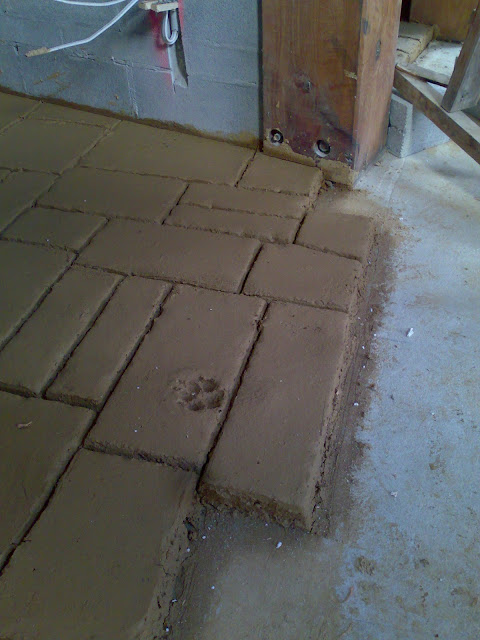 There’s more to do and after that, there’s earth plastering for the walls, if you want to get muddy.

9 thoughts on “How to lay a poured earth floor”