I don’t think I’ve posted a pic from this angle: 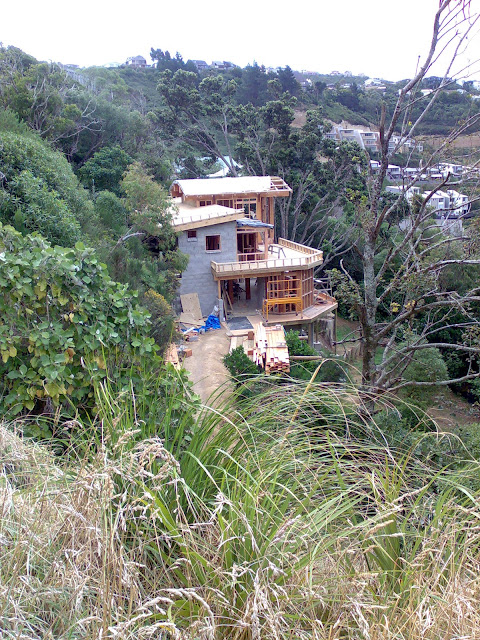 We’ve got roofs. Four of them. Two will be green roofs, for which we need to order over two thousand plants. The soil is only 100 mm deep, so it’s mostly tussock and succulents.

It’s surprising how quickly the house has gone a bunch of bits of wood, sticking up in the air, to a house. Putting the roofs on was a major transition, even if one of them is still made from tarps.

This is above the bedrooms: 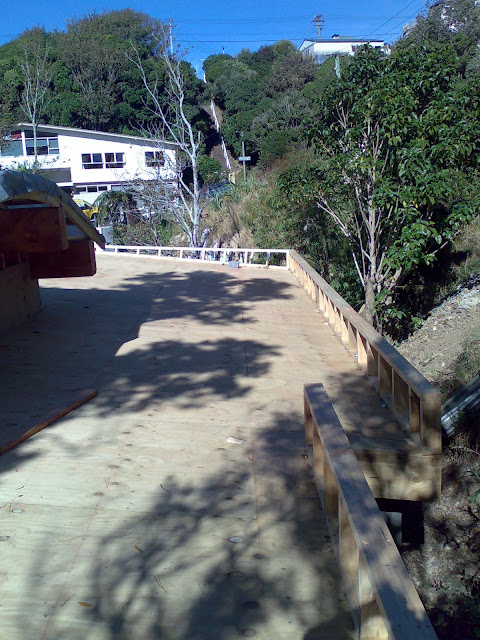 In other project news, testing the third and final circuit board for the Fannies reveals that it works. Woohoo! Here’s a tiny, two batteries to five volts converter that kicks out 600 mA. Three Watts is pretty grunty for something this small: 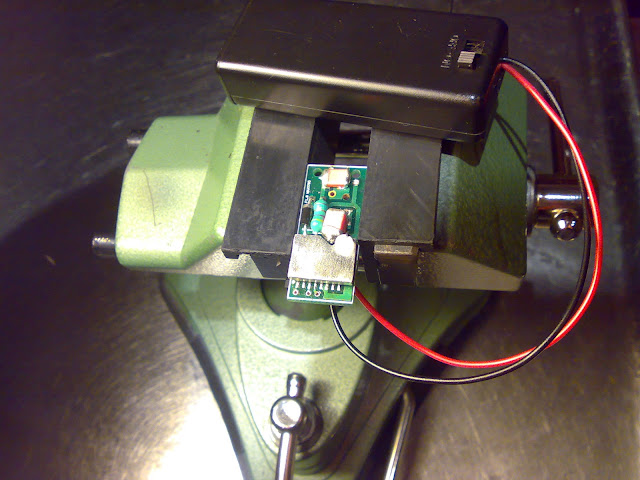 I did discover a new potential failure mode. The heatsink, the shiny bit of aluminium in the pic above, is a little bit small, to fit into ludicrously tiny space. This is fine, coz the power supply is so efficient that not much heat needs to be sunk. Well, that is to say, the MAX1703 chip is very efficient (90%+) at the designed maximum load. However, when turned down, the efficiency drops as low as 50%, and the heat to be sunk goes up. Up lots. The Fannies have a ridiculous peak power, but most of the time, they’ll be turned down, so major heat production. Hmm… I don’t have the kit to test the variable load properly, and there’s no room for a bigger heatsink without changing a whole bunch of other stuff. Ah, hell, we’ll just try it and see if it explodes.

Scuffing PVC
And now, a question. I’ve some clear, flexible PVC tubing that I’m using as light guides. I want to scuff up the inside of the tube. I’ve yet to find a good way to do this.
It’s 5 mm inside diameter, to fit snuggly over the LEDs. I want the LED light to come out evenly along the length of a 100 mm piece of tube. Right now, it’s too shiny, and the light just bounces along and comes out the end. I want it out of the sides and scuffing up the surface works wonders. However, the surface is the inside of a 5 m tube, so too small to easily get sandpaper down there.

Best I’ve come up with so far is fine sandpaper taped to a bamboo skewer. It’s just small enough to fit in, only falls apart every five minutes, and I can do a tube in about twenty minutes. I’ve got 39 more to do, hence I’m looking for a better option.

Option 1 – Ideal would be a solvent, but if acetone won’t touch it, then I’ll have to round up something really nasty, like tetrahydrofuran.
Option 2- Something abrasive that fits onto a thin rod better than sandpaper. Abrasive heat shrink does exist, but is mainly for handles. I don’t know if it’s abrasive enough or I get get some small enough.