How much can we reduce NZ’s greenhouse gas emissions, at what cost, right now?

That’s a big question, with lots of data-heavy answers, so let’s sum that all up in one graph: 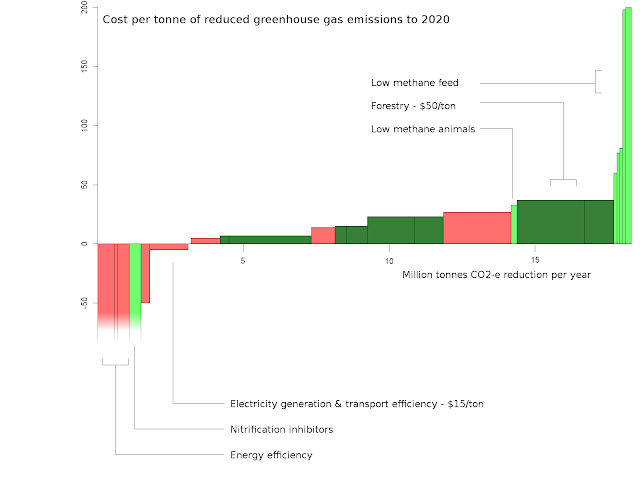 This is the cost curve1. Each action or new technology is a block on that curve2. The width is the saving of emissions; the height is the cost. The options are sorted by cost, because we want to take the most cost effective actions first.

First of all, we start with energy efficiency. Basically, our houses are so crap that improving them is cost-negative, it’s actually profitable. The same is true for commercial buildings and several industry processes.

Then there’s the nitrification inhibitor DCD, you put it on pastures, it stops cow piss turning into the third-most important GHG, nitrous oxide. Then after that, things start getting expensive, and undefined. The dark green colour is forestry, and trees start to matter a lot. Pink is transport and electricity generation.

The certainty of this curve is pretty shaky. Even for DCD, it works well under some farm conditions, less well under others. Similarly, the dark green forestry blocks are just “Afforestation and avoided deforestation: $15 price signal”, $25, $50, and so on. Basically, the ETS puts a price on carbon, in response, the forestry, transport, and electricity generation sectors respond to that price by doing whatever it is they do.

And yes, it looks tricky for agriculture (the light green blocks). Nitrification inhibitors are cost effective, but provide reductions that are nowhere near enough. Every other option looks expensive.

But we can reduce emissions, right now, to a given level, with some idea of the cost. So, what level of reductions do we need? Here’s that curve of our reduction options, put in the context of NZ’s emissions: 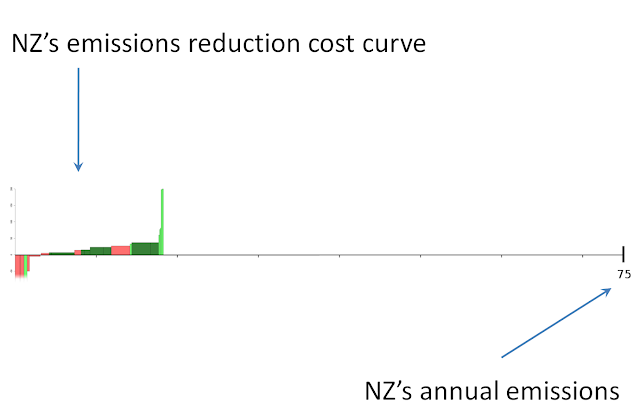 1 – The data here comes from this MfE briefing
2 – Yes, strictly speaking, each action won’t deliver a set benefit at a set cost, it will have it’s own cost curve of given benefits at given costs, but that just gets complicated. These are reasonable assumptions, and if you don’t like it, go and argue with McKinsey, who started the trend for this kind of curve.

6 thoughts on “How much can we reduce NZ’s greenhouse gas emissions, at what cost, right now?”