Can you tell what it is yet?

This is the Next Project, version 0.1. For a change, I’m going to make something that I already know how to make. For even more brownie points, it’s something that doesn’t push the boundaries of technology until it’s precariously balanced on the edge, waving its arms frantically to avoid falling into the abyss of not-workyness. 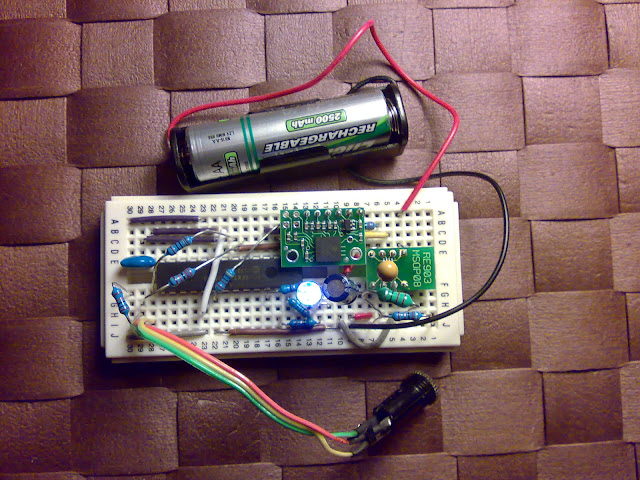 That’s a MAX1796 to give me 5 V, 250 mA off from one battery and two external caps. I like. Shame it’s so tiny. The other board is one of Pololu’s shiny accelerometers. The microcontroller is an old Picaxe 28X I had at the bottom of the bits box. Most of the output side isn’t there, coz I just need enough to let me write the code for the sensor integration and output method.

In fact, I’ve even written half the code. This took one evening. It all appears to work. Holy crap! Admittedly, the code has no fancy state tracking, no complicated algorythms, no byzantine pre-processed pile of data, it just turns on and does it’s thing. One sensor, one microcontroller, one output.

Still, I should point out that:
a) I’ve found the perfect box, a 2xAA battery box with switch. As this runs off one AA battery, I just need to squeeze all these gubbins down into the space left in the box, namely the footprint left where the other AA battery would go. This looks feasible but interesting.
b) The microcontroller I want to use (a Picaxe 20X2) isn’t even out till next month. That’s how bleeding edge I am.