I decided at the start of the year to post a picture of myself each week. 2008 was pretty stealthy, for 2009 I wanted to round up a pile of pics, so that when I’m nine-hundred and twelve, when my great-great-….-grand nieces and -nephews say to me “grand-uncle, you’re much more of a smug wanker than you used to be”, I can say “no, in the ancient days of 2009, I was just as smug a wanker”.

Whereupon they’ll reply with one of:

So far I’ve managed five pics in eight weeks, so here’s your bumper edition. Includes picture of me with my shirt off, waving it all around: 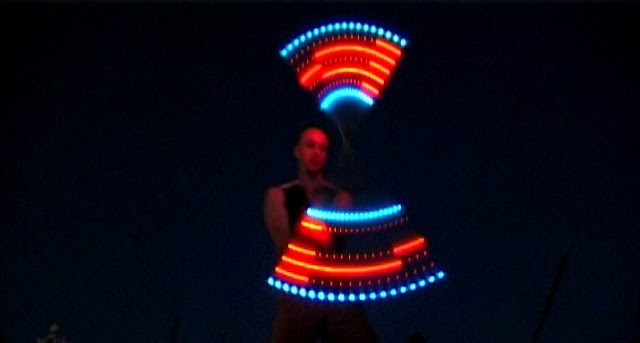 I’m sure you all notice the 152 Hz pulse width modulation (the dots – it turns the lights on and off to vary the brightness, which doesn’t work if it’s moving this fast). M4 is aiming for 97 kHz, to avoid this effect, or at least be able to recreate this effect deliberately, when needed, and be able to do proper dimming and colour fades.