One of the great joys of owning our own place is that if we what some shelves bolted to the walls, we can just bolt some shelves to the walls. One of the drawbacks of living in a beautiful house built by a master is that you really can’t be half-arsed. Just getting some plywood and angle-brackets is right out. With that in mind, I decided to make three more shelves.

The amp and sub sit in the corner of the snug, occasionally with an ipod on top, occasionally with a laptop for watching of movies. Clearly, this is half-arsed, but a perfect spot for two shelves, mounted to both walls, wide enough for the amp, deep enough for a laptop and, for bonus points, with great big holes for power cables, speaker cables, interconnects, and cooling. How long could that take? 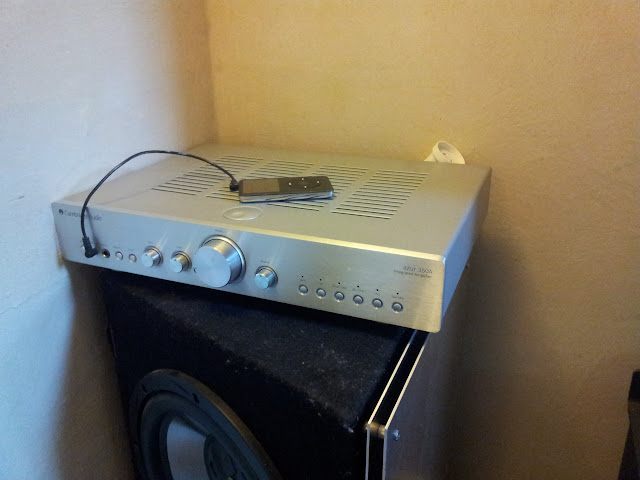 So then, round up a pile of left-over wood, cut it square, straight and to size, glue & screw, plane, sand, and install. Simple.

Hahaha no. Or rather, if you’ve done this before, you’ll know just how much real-world complexity is involved in the simple plan above. But I’ll ignore that to save you the swearing. 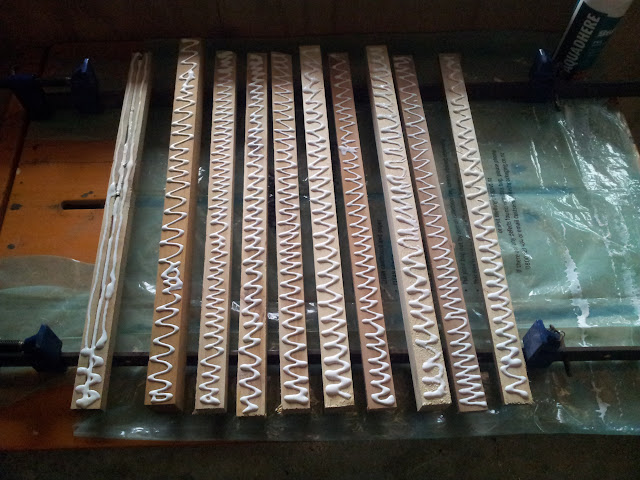 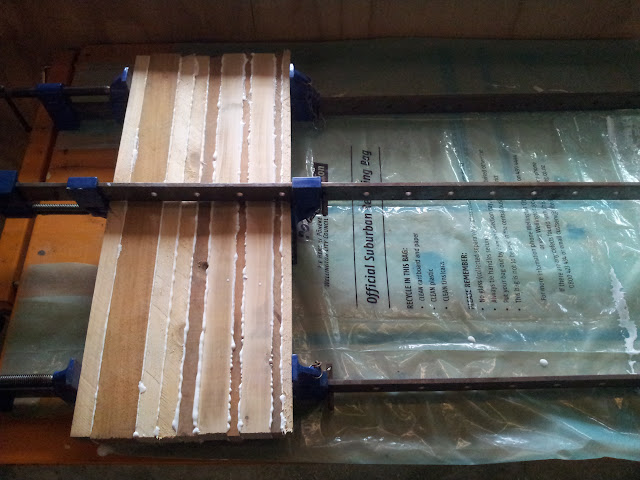 There’s an ugly stage here, coz unless you have a decent laminator/vaccum table, the stack of glued bits of wood isn’t going to be flat, nor are all the bits of wood the same size or even properly square. So once the glue is set, there’s a fair bit of hacking with the plane to get a slab that’s roughly flattish, parallelish, and square or so, give or take. The ends will look like crap, so you make the slab oversize and cut them off. Once that’s within spec, plus or minus a bit, thereabouts, then sand it till you’ve removed the evidence of the bits that you buggered up: 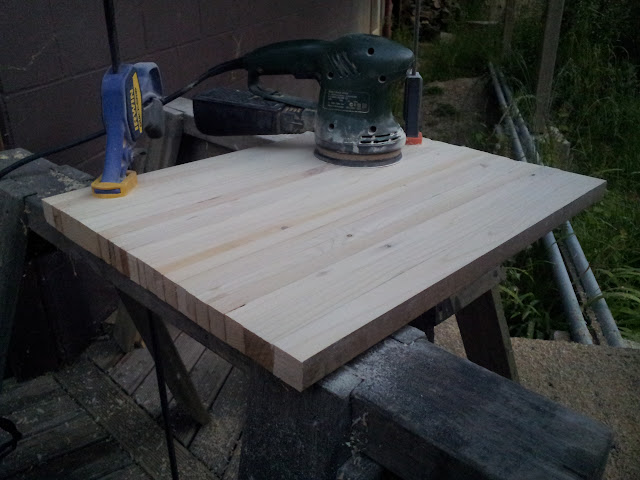 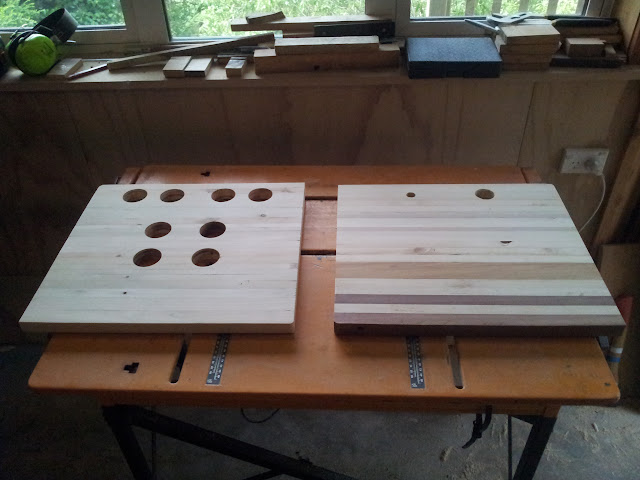 As you’ll not be surprised to hear, the $20 set of hole saws cuts ragged as all hell, but the $50 saw cuts cleanly.

Tidy up some off-cuts and nail them to the wall for the angled-pocket screws to bite into. At this point, I’d just like to complement Kreg for their angled-pocket screw jigs. The Junior isn’t designed for screws at just this angle, but a quick bit of wood, a screw, and a clamp and there you go: 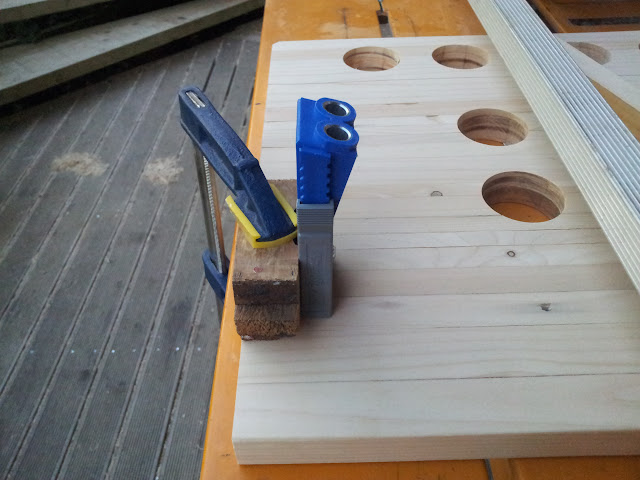 Tidy up some off-cuts, nail them to the walls while trying to keep them level, and the fun part finally arrives: 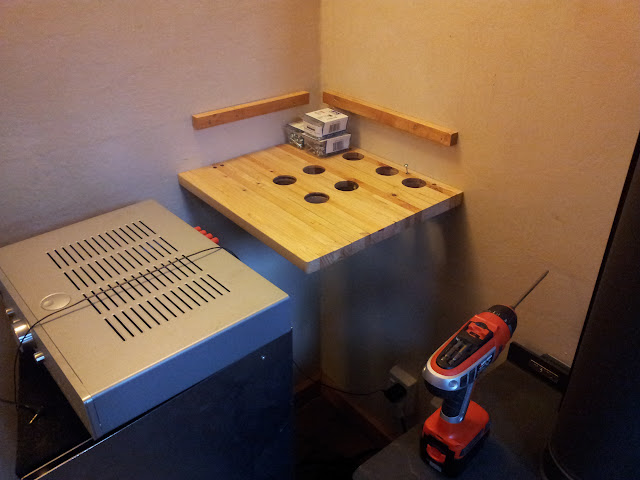 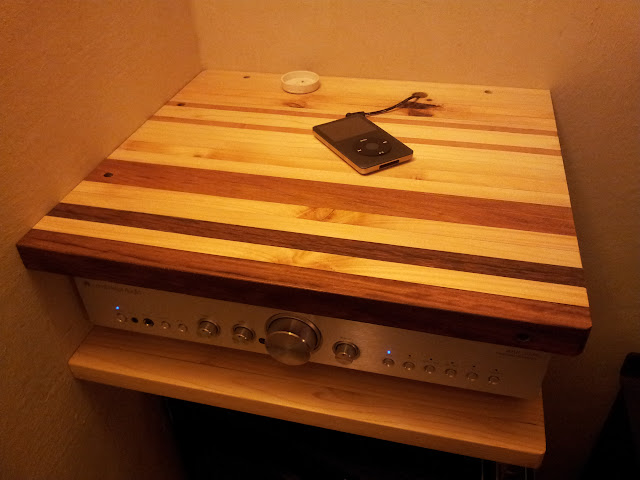 The dark wood strips at the front came from what looked like the scrappiest bits of two ancient fence-posts. We picked them up off tieke‘s Dad for when we were laying out string to mark out the foundations of the house. He’d got them to run a wire for an electric fence, back before electric fenceposts where metal or plastic. So, old and looked like crap but I found them in the pile, picked them up and noticed they were the densest wood I’d ever handled. Turned out they were beautiful. I’m really not sure what wood it is, totara has been suggested as the colour is close and that got used for rot-resistant fenceposts, but that’s nowhere near heavy enough. I’ve a vague recollection of being told they were some Australian wood with a very low conductivity, specifically for electric fences, but google is failing me. The third darker strip came from the rimu the doors from the old Trekkers Hotel which Cliff cut down to fit our doorways. The two other darker strips are heart macrocarpa, the lighter wood is either mac or the lawson cypress left over from the decking.

So that’ll do. Well, might recess the power plug. Oh, and a heatshield between shelves and flue. But apart from that…

Vague plan is for the old netbook to sit here with a USB sound card, wirelessly synching with a NAS that lives next to the router and modem. To that end, the router and modem have been on the floor in the corner of the toys room since before we had a floor: 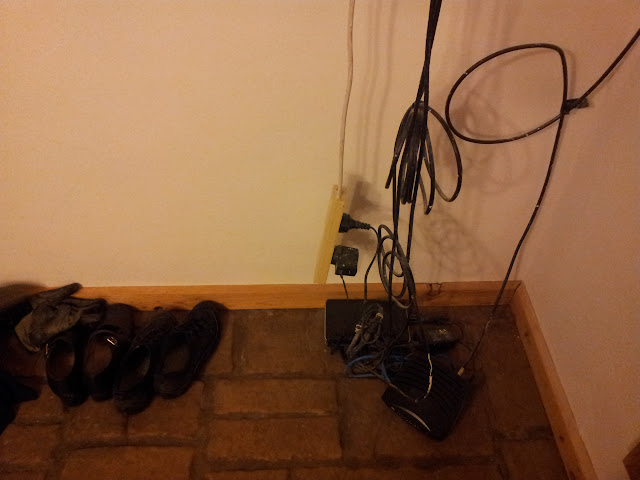 The toys room is at the back of the house with no outside windows, just the bottle wall. It’s the darkest room in the house, hence we’ve used the lightest coloured wood, lawson cypress, for the skirting. So, a shelf from that then. Except we didn’t have any wide stuff. Cliff provided a plank wide enough, but only 16 mm thick, so I thought easy, cut it in half and glue & screw together: 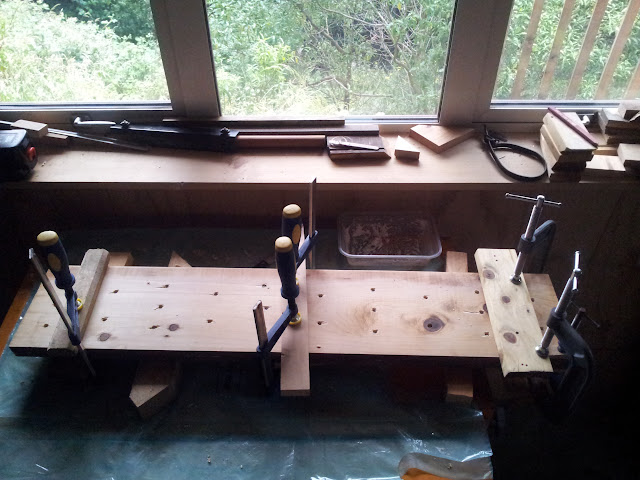 Well, it was a tad cupped and the glue made it worse. So there was further swearing and it’s a tad warped. I recommend not looking at it too closely. Anyway: 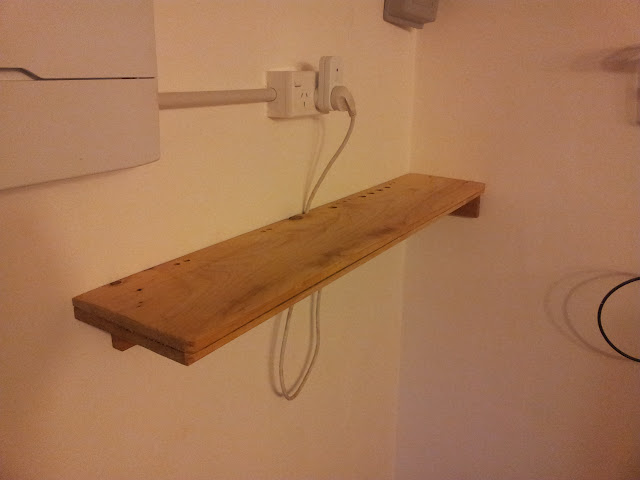 Nice, clean look, yes? There’s even holes for the cables, with the power board mounted underneath, out of the way: 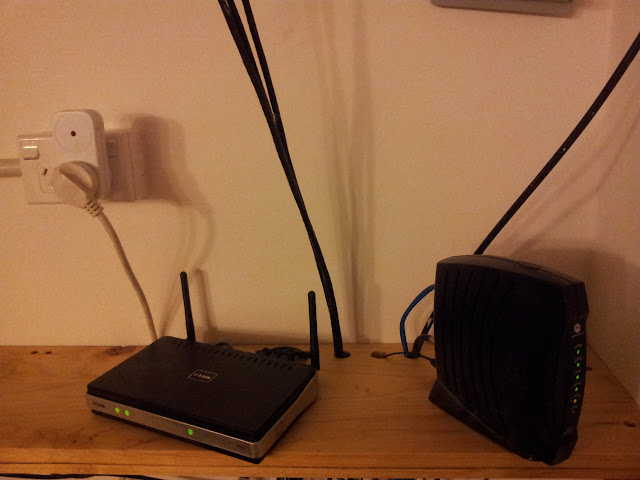 Sadly, a fairer view shows that it’s still a bit of a mess, so some shorter network calbes needed: 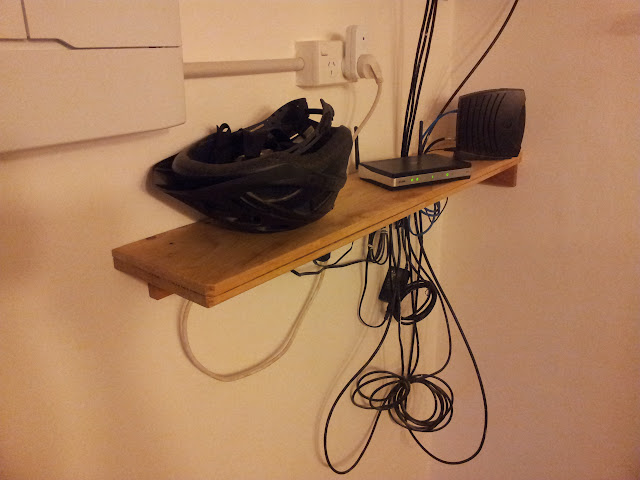 Oh, and I put all the holes in the wrong place, so those need doing again. Still, getting there.