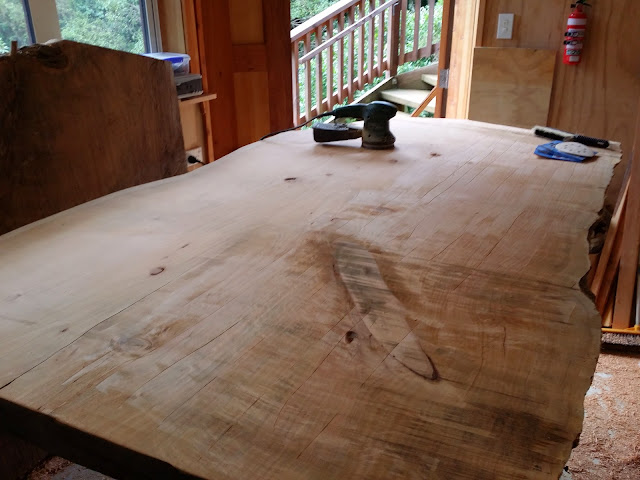 Yeah, and next weekend too. 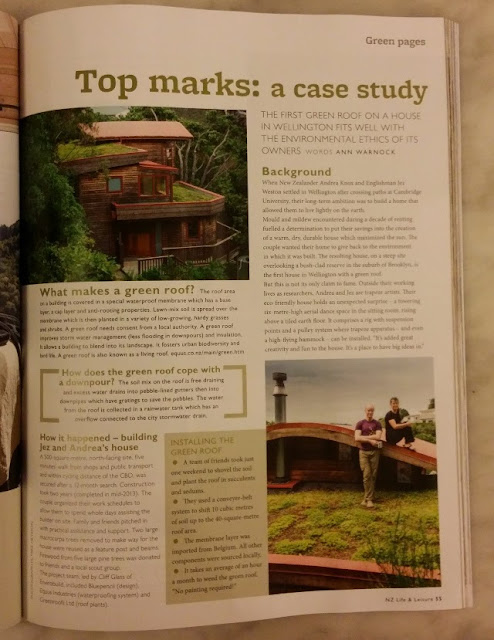 Anyway, it’s two more pages pushing the idea that houses can sit lightly on the land and be warm and dry and healthy.

I wanted to put a living roof on the shed, to match the house, to reduce the visual impact of the shed upon the neighbours, but mostly replace the natural habitat taken away by the shed. 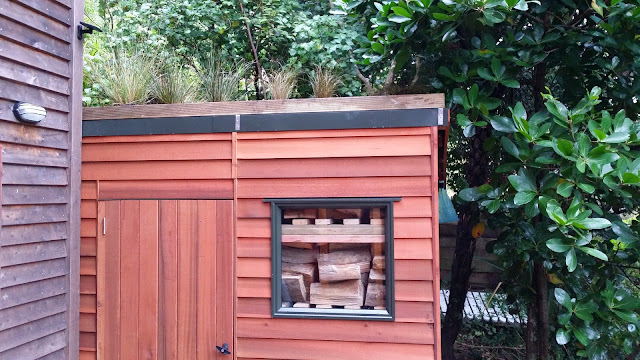 The roof on the house has been just fine, although we have some weeding to do. For a shed, rather than a house, we could do something simpler, while using up left over wood and soil. To hold the soil against the slope of the roof, there is a wooden grid. To stop the soil washing away while still letting water drain, there is weed mat and holes bored in the horizontal grid members. I might have got carried away making the grid up, it really didn’t need angled pocket screws, but WTH. The grid is held in place by some stainless strapping over the roof edge and the handy nearby concrete wall. 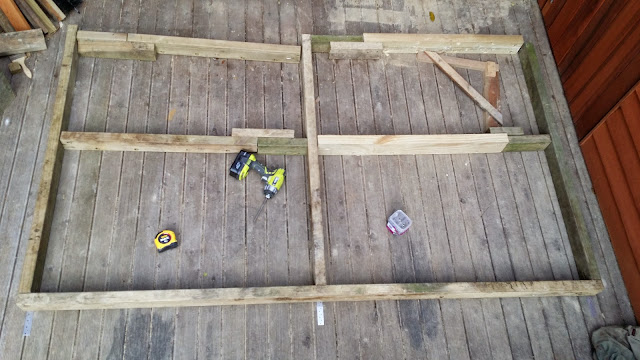 I only want to build this once, so I want to do it right. That means making it strong enough and preventing corrosion… and the shed has a very flexible steel roof. Whoops.

The roof is going to be carrying about a quarter of a tonne of wet soil. On top of a wooden shed. In an earthquake zone. That’s not good and I don’t want all that coming down on someone’s head. Hence all the uprights in the shed have been at least doubled, there’s three more purlins, and rafters fitted every 400 mm. I used a deflection-limited approach to the structural design, which is a technical term meaning that I jumped up and down on top of it to see how much it flexed under 80 kg. It didn’t. And then after loading it up, I put a straight edge against to rafters to see how much they had bent. I couldn’t detect any bending, so I think it’s good. 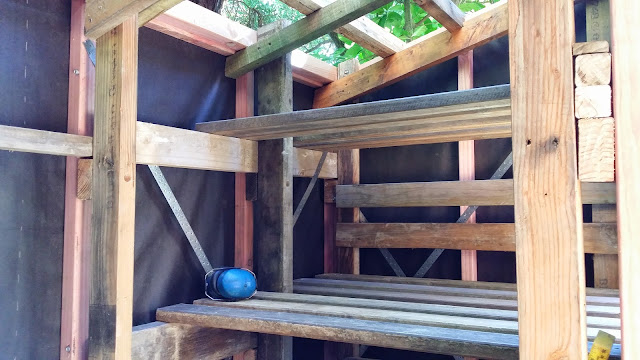 As for corrosion, the shed roof is coloursteel, so half a mil steel, galvanised with lots of zincalume, and baked on paint. It’s warranted for fifteen years, even in salt spray zones. (Yes, we’re in a salt spray zone, despite being 150 metres up and three kilometres inland. We’re inland from Cook Strait, which is one of the roughest and windiest pieces of water in the world.) So it should be good, right? I mean, that’s what nearly every house in NZ uses… although it keeps plenty of people employed replacing roofs every few decades.

So first up, all the roofing nails got a coat of primer and epoxy paint. As did all the scratches that happened while installing the roof. Oh god, so many scratches… 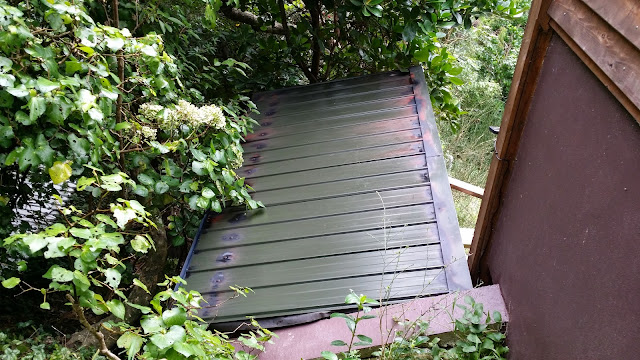 Coloursteel is great if it gets to dry out every so often and the rain washes the crap off it on a regular basis. Sadly, it shouldn’t be used in contact with permanently wet materials or soil, which is a bit arse for a roof that’s going to be covered in soil. The steel roof is also going to be impossible to inspect for rust without digging up the plants, leading to a possibility of the whole thing collapsing on someone. So to keep it from rusting, there’s a layer of polythene directly on the steel, doubled over so that staples holding the top layer to the wood are separated from the steel by the bottom layer of the film.

For good measure, the top edge of the poly is also siliconed against the steel, to stop water running down between them. I probably should have put a flashing over that edge, but we’ll see how it goes.

The poly is protected by weed-mat, which also covers the drain holes in the horizontal parts of the grid. 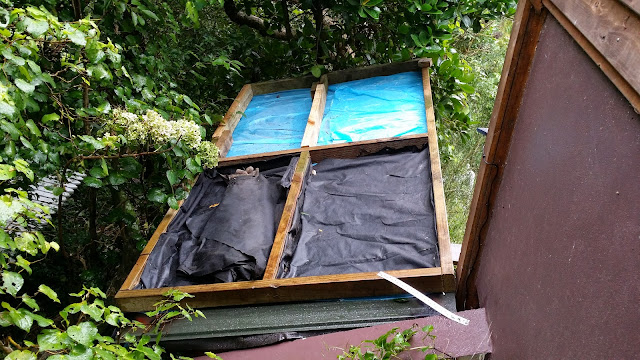 For the plants, I ended up scratching my head somewhat. The micro-climate on the roof varies from sunny to shaded. It’s in a damp spot that gets plenty of rain, but with the thin (100 mm) soil it’ll vary from moist to very dry. And then there’s huge amounts of wind, coz this is Wellington. In the end, I just used Greater Wellington’s regional plants guide and chose the toughest natives from a bunch of ferns, low cover, and sedges. 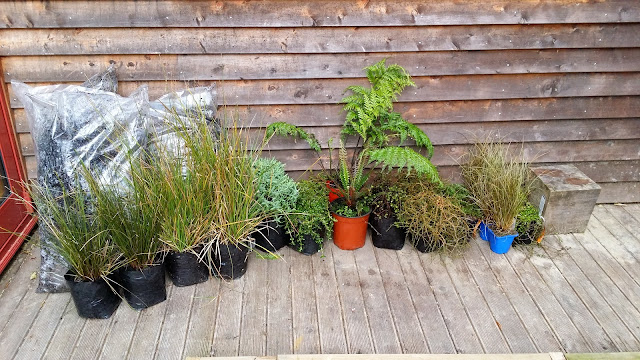 These ended up spread across the roof, with the ferns to the north in the shade of the tree and the sedges to the south where it’s more exposed. I’ve no idea what will survive, but plenty of weed mat and bark mulch should help. 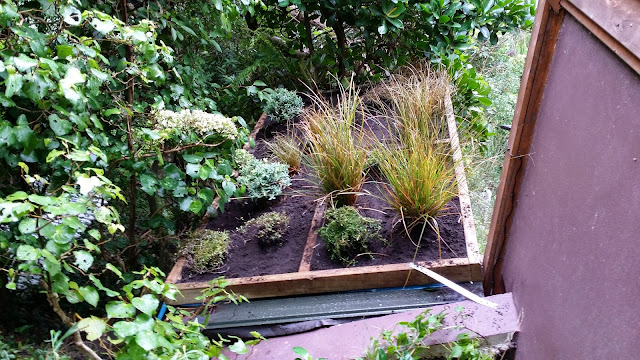 Mostly, I like that from above you can barely see the shed at all. From the front, the sedges stick up over the roof and the coprosma should creep over the edge of the roof-line, helping the shed to blend in. And hopefully, it’ll last a good long time. Ask me in a decade or two how it’s going. 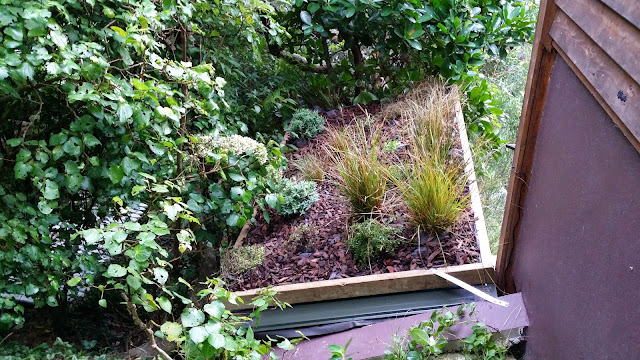 Things I screwed up:

Made from scrap to video performances at Raw last night. Worked pretty good to hold a Note 3 steady, while following aerialists, monsters, and … circ wheelers? Circists? Anyway, them. 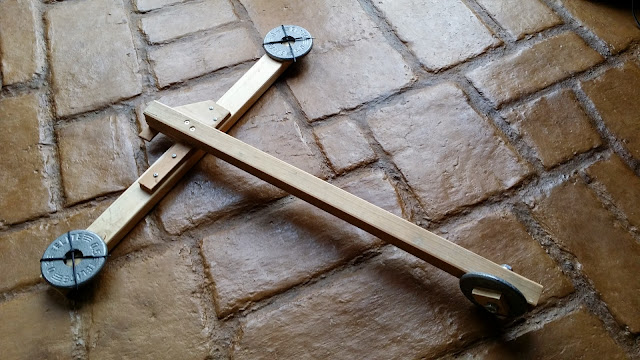 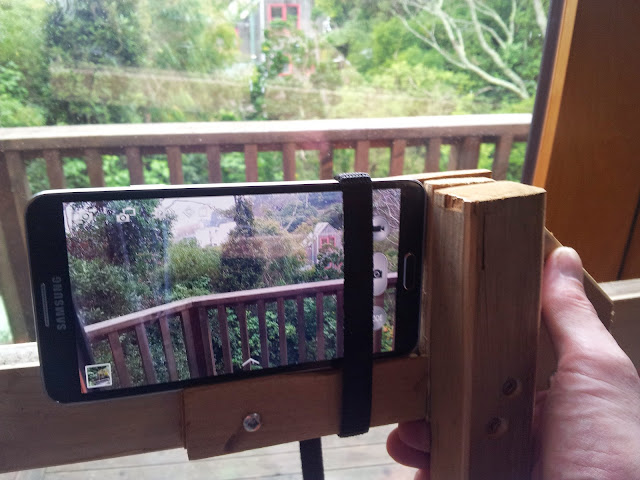 The biggest drawback is that almost every face and edge of a phone is functional and therefore needs to be accessible, which makes it a bugger to clamp in place. This toe-strap worked ok, but I’d go for something that clamped from the other side next time. You know, when I want to put more than an hour into it.

No example videos right now though, coz vids are going to the performers first.