Back from Rainbow Serpent now and mostly recovered from having too much fun. So much fun that I haven’t any pics or vids. The Mitochondrion mark 4.2.3 got a great reception, someone described it as brain-melting, which is one of the feelings that I’m trying to create, and I got to meet lots of other good people and see lots of other LED gear.

I’ve mostly been developing this glow staff for my own pleasure* but with an eventual goal of making these available to other people. “Eventual” can be a long time in the future, but Reese from Soul-fire had a spin (and looked downright wonderfull with it) and then bounced up to me and said “you should be making these so other people can have this experience”. That’s the best reason for hurrying this process along. 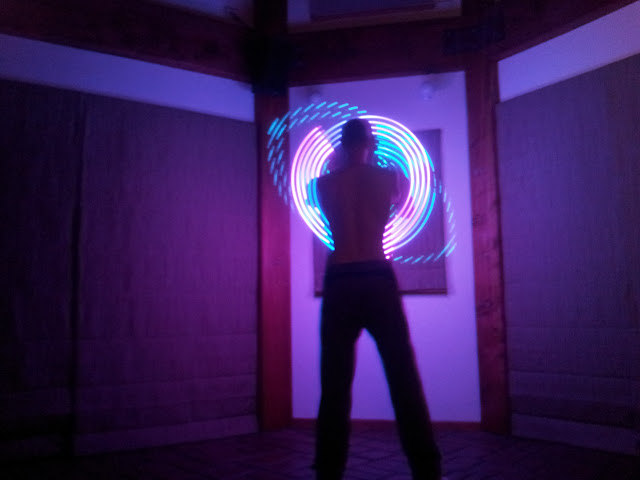 END_OF_DOCUMENT_TOKEN_TO_BE_REPLACED

While everyone’s off to Kiwiburn, we’re off to Rainbow Serpent in Oz. It just worked out that way. Anyway, for the Mark 4.2.3 I’ve fixed lots of bugs, mended a couple of screws, implemented a couple of more structured modes, 24 modes in total, and doubled the speed – 10 ms per refresh.

I’ve also nearly run out of program memory (28 kB out of 30 kB) and RAM, so fitting in the code for the audio, BlueTooth, and motion-responsive patterns is going to be tricky. 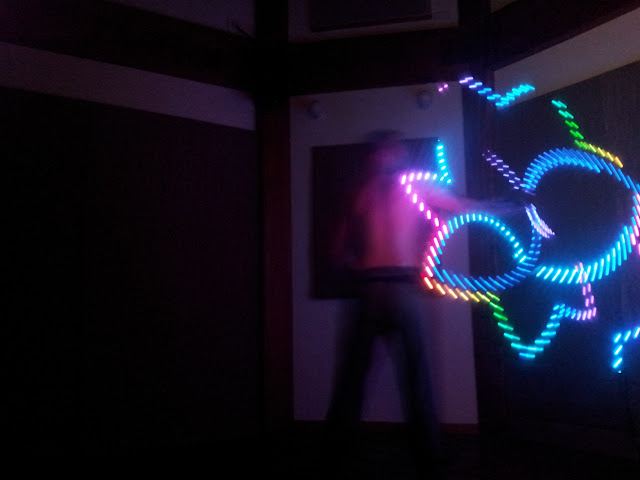 I must go now, to rejoin my people: 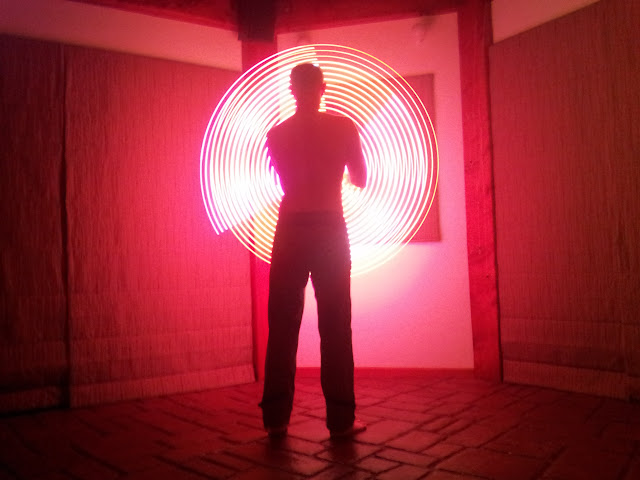 One of the great joys of owning our own place is that if we what some shelves bolted to the walls, we can just bolt some shelves to the walls. One of the drawbacks of living in a beautiful house built by a master is that you really can’t be half-arsed. Just getting some plywood and angle-brackets is right out. With that in mind, I decided to make three more shelves.

The amp and sub sit in the corner of the snug, occasionally with an ipod on top, occasionally with a laptop for watching of movies. Clearly, this is half-arsed, but a perfect spot for two shelves, mounted to both walls, wide enough for the amp, deep enough for a laptop and, for bonus points, with great big holes for power cables, speaker cables, interconnects, and cooling. How long could that take?

END_OF_DOCUMENT_TOKEN_TO_BE_REPLACED

After my waffling on how we create meaningful stories, or rather on why we prioritise such a small and boring selection from the vast range of possible stories, I’ve enjoyed reading:

Porpentine‘s Creation Under Capitalism essay (and pretty much everything on Nightmare Mode, for some actual thinking about games and gaming.
Starship Reckless for biological realism in hard SF and a host more
Requires Hate for having no patience with idiocy
And from Leninology on Skyfall – “Britain today is a powerhouse of ideas, experiments, imagination”… oh no, wait… no it isn’t. All that remains in postcolonial melancolia is class privilege and misogyny.

And more tedious hang-wringing about the exhaustion of SF and the blurring of boundaries between SF & fantasy.

He’s bitching. Ooo, he’s bitching, that science fiction has decided the future will be infinitely complex and therefore no-one can tell stories about it without dirtying their hands with the fantastic, that capitalism has decided that nothing is sacred and therefore no-one can tell stories about the sacred, and that postmodern culture is just imperialistic cultural theft made acceptable by irony and therefore every story is a western story, no matter what cultural clothing it happens to have pulled off the Ikea customisable module storage unit this morning.

I disagree. Or rather, these features are symptoms of a larger problem, which currently has no solution and we’re mostly arguing about whether there is, or could be, a solution.

(Although to be fair to McCalmont, I wish I could write a put-down like: “genre writers spend their days like performing dolphins… occasionally, a particularly well-trained dolphin receives a celebratory bucket of fish heads in the ballroom of a beige mid-Western hotel.”)

This comes down to rates of change, both now and accelerating into the future. The rates of change we face are unprecedented. I’ve described this before as “post-normal everything” – for a new normality to be created takes time. For a particular set of cultural, economic, social or climatic values to bed themselves down, become a new background and be implicitly and unconsciously accepted as normal requires those values to persist and there simply isn’t time. By the point that a decent fraction of the population accepts a particular set of changed social values as normal, we’re on to another set.

Currently, it seems that capitalism is the only ideology that functions under such rates of change. The particularly US form of capitalism seems to be ahead of the pack when it comes to self-justification, self-strengthening and creating conditions of positive feedback for itself that lead to expansive mode-locking. Equally, the harsh and accelerating rate of change of everything is doing strange things to science fiction – the cultural tool that we have for understanding the change of everything.

When rates of change head towards infinity, then it makes sense for humans to treat the results as fantastic, simply because religion, fantasy, and irrationality are the mental tools that we have for dealing with beings and events far beyond our everyday reality. Sci-fi’s uglier step-sister fantasy gets stick for copping-out and abrogating sci-fi’s responsibility to explore only the possibilities that are grounded in evolutions of this world, but I think that stick is a mistake. Fantastic elements already exist in this world – from the point of view of your stereotyped goat-herder, there’s no functional difference between lightning from Heaven or a drone strike. Equally, the strategic response of said goat-herder to either situation has similarities – engagement with a complex system that has to be engaged with on its own terms and not that of the goat-herder. Hence fantasy works as a tool for exploring the impacts of such rates of change.

At this point I could just go “blah blah Latour blah blah” and take it as read that there are a plurality of different ontological communities, orders, sets of knowledge practices, and institutions. Sadly, that just leads to the singular position that there is no meaning, or rather that that there are a multiplicity of equally-valid stories to be told about the world. That multiplicity leads to a particularly Western ambiguity of choice, an ambiguity that’s perpetual and all-encompassing. It’s an Imperialist stance that denies any meaning by resisting disambiguation down to a singular meaning. Or I could ask: is that ambiguity simply a direct result of commercial pressure to maximise the size of the potential audience by refusing to rule out any ontological position and thus any audience segment?

Fucked if I know.

[TL;DR Summary: SF reviewer thinks that SF is boring because authors are cowardly, lazy, and overly ironic; I think SF is either a confused response to an ever-more rapidly changing world, or ham-strung by Western capitalism’s need to justify itself, or both at the same time.]