Just back from VUW’s earthquake seminar and there’s two points that stood out for me:

2) You can make yourself safer
We all know, coz we’ve been told again and again, to get an earthquake kit, with food and water for three days. But no-one in Christchurch died because of lack of water. Someone did die because a television fell on top of them. So, screw your bookcases to the walls, and fix anything else that could fall. Do it this weekend.

Only 1% of houses in Christchurch had brought a builder in to have a check of the structure. There are very basic and cheap actions you can take to make your house more earthquake resistant. For houses on pole foundations in Wellington, about 70% are not properly fixed to the poles. If your house is fixed down, it will flex and probably survive; if it is not fixed then it is likely to fall off the poles and get trashed. A few hundred dollars on steel fixings can save your house. Get a builder to have a look. Do it now.

Am I one of the “paid up crew for the cratocrats*”? Am I “just instinctively carving a niche out of what’s available”? Am I “leading the conversation in a dance of small circles”? Buggered if I know what they’re on about, but this is what some people who have never met me think of me:
The implications of geoengineering schemes for NZ, third comment from end

Yes, it’s on a chemtrails conspiracy site and yes, they’re greatly misrepresenting what happened at the workshop I helped organise. But let’s ignore that for now, because I don’t believe it’s good enough to just say “nutters”. We shouldn’t ignore what anyone has to say, because at the heart of all conspiracy theories must be something that is personally useful to the people who have those beliefs. I’d put forward the idea that conspiracy theories are a comforting simplification of the complexities of the world. They are psychologically useful.

So that’s how they start, but why do they persist, when there is a colossal lack of evidence that supports those beliefs in any rational way? Is it just because it’s hard to back down from a public belief? The most interesting idea I’ve read recently about this is the idea that, for people to change their beliefs in the face of evidence, they need to have a face-saving way to back down, and that need gives you a lever to get in there and convince people.

Given that my job involves putting forward evidence with the goal of changing people’s minds, it’s a topic of perpetual fascination for me how little people’s beliefs and actions depend upon the evidence in front of them. The question for me is always “how I can I present the body of scientific evidence in a way that’s fair to the evidence and will convince people to act upon that evidence?” I think I’m doing it right, but I’m always keen on hints for how to do it better.

Alternatively, we have this statement from another group influencing New Zealand:
“Favourable tax treatment of housing… should be removed. These distortions exaggerated the surge in house prices, giving rise to wider wealth inequalities… Despite the slump in housing demand, property prices remain at high levels relative to rents and average incomes, keeping affordability low for less affluent households…”

Was that the Green Party? No, it was the OECD in their Economic Survey of New Zealand, released yesterday. (For those of you who aren’t employed doing economic policy, the OECD is roughly the equivalent of IBM, back when IBM mattered. You remember, “no-one ever got fired for buying IBM”? No policy wonk is ever going to get fired for doing what the OECD says, no matter how dead-eyed and slack-jawed that wonk is.

And of course, being the OECD, they also repeated the usual list of neo-liberal, Washington consensus recommendations that Don Brash will shortly be pushing on us: less government spending, more privatisation of power companies and state-owned assets, less environmental regulation, more market-based water charging, and the use of the police and armed forces to cull economically unproductive sectors of the population.

But hey, it’s the OECD, so you can’t just say “bunch of nutters” and ignore them, despite the lack of evidence for their macroeconomic policies. Instead, they’re in a situation of stating beliefs that are politically useful, rather than psychologically useful.

Still, those beliefs do change, as in the quote above. They were not suggesting capital gains taxes in their 2009 economic survey. So how to push them further?

Oh, and in other news, I arrived in NZ nine years ago. I will presume that any UK flags that I see in Wellington today are in my honour.

* – What the hell is a cratocrat anyway? I think it is being used to mean groups who are in power who have no dominant ideology other than being in power, as opposed to say technocrats who are in power coz they are technical experts in particular fields, or democrats who are voted into power. The only academic references I can find are in truely obscure stuff about power structures in post-Soviet Russia (like this one by Foursov), how that terminology made it’s way into the crazy corners of conspiracy culture, I have no idea.

We’ve got a strategy, we’ve got trained people, we’ve got response boats. Is it enough? Well, here’s some of the hardware that was needed to stop the Gulf of Mexico oil spill: I kid you not. We have three of these, Kuaka, Tukuperu, and Taranui. And that’s it.

Now, look at our hardware and tell me if you think that is sufficient for a ‘one-in-a-hundred’ year accident?

We’re officially declaring the first room in the house is done! Yup, and it’s the smallest room.

We have also sorted out the aerial rigging, with a phuge ladder up one side of the main space, wire rope, pulleys, and generalised stuff for hanging off. We didn’t realise that the ladder and the main suspension point are close enough that the flyer and the counterweight can reach out and interact. Also, the weight difference between tieke and me is just right so that if I’m at the top of the ladder and she’s on the ground, I can jump off. She goes up, fast; I go down, slowly enough to cope with the halt at the bottom. Annabel was over from Boulder for a play: 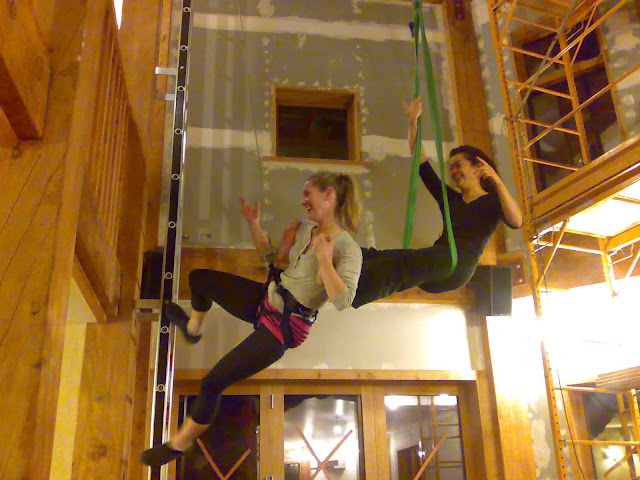 This week the builders are building the retaining wall by the path. The path itself is bomb-proof, but the slope above is dubious and above that is the road, so I doubt the neighbours would be too chuffed if it gave way. So into this long hole will go some concrete footings, then a timber crib wall is going above, to be filled with spoil and gravel. 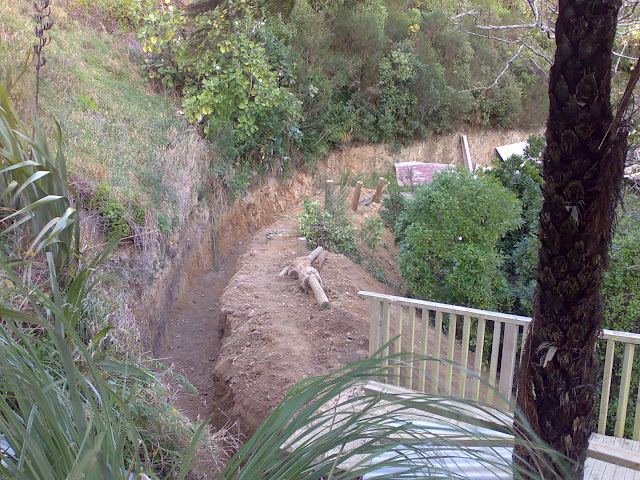 So if you’re free this saturday and want to experience the joy of shoveling, we can provide a shovel. (You may get your shoveling arse kicked by tieke‘s Dad, who is in his 80s and still shovels regularly.)