Chris Lerman’s piece An Accelerated Grimace: On Cyber-Utopianism sums up much of what I think on the rare occasions when I can bear to read Clay Shirky, Malcolm Gladwell, and any of the other boosterish, visionary, economically illiterate and conveniently unchallenging prophets of our time.

You could choose to see the future in the “diverse groups and movements comprising cyborg democracy: democratic transhumanists, nanosocialists, revolutionary singularitarians, non-anthropocentric personhood theorists, radical futurists, leftist extropians, bioutopians and biopunks, socialist-feminist cyborgs, transgenders, body modifiers, basic income advocates, world federalists, agents of the Culture and the Cassini Division, Viridians and technoGaians.” You could call that list a bold, branching exploration of possibilities, or a random grab-bag of groups who hope they won’t ever have to deal with reality.

The Royal Society and the Prime Minister’s Chief Science advisor got together to answer questions about the Christchurch earthquake and aftershocks. I’ve only been peripherally involved in this briefing, as I’m not an earthquake expert, but see what you can spot that sounds like me:

The briefing itself: The Canterbury Earthquakes: Scientific answers to critical questions and Sir Peter’s comments.

Media coverage:
The launch on Stuff, together with TV coverage: PM’s science adviser rubbishes Christchurch quake claim – where of course they focused on the claims of certain nutters to be able to predict earthquakes. Bonus points to Stuff for including video of the back of my head.
TVNZ: PM’s scientist slams March 20 prediction
3 News: Govt’s science advisor: No one can predict quakes
NZ Herald: PM’s chief scientist hits out at quake forecasters
Thaindian News! Wrong photo though: New Zealand PM’s science adviser slams Christchurch quake prediction
Today’s Stuff/Dom Post: Scientists see no reason not to rebuild Christchurch
And Yahoo gets the award for dumbest commenters. No-one quite says “experts, eh? What do they know?” but it’s close: Sir Peter hits out at earthquake forecasters

So yeah, the usual poor coverage, focusing on a made-up controversy. More interesting to me is that the spire of Christchurch cathedral has toppled or damaged four times before in earthquakes, in 1881, 1888, 1901, and 1922, so what we’re seeing is what we should expect and prepare for.

I’m going to be in the Cirque de Soleil 3D film! Well, sort of.

Here’s me, being all famous and stuff, out at Fuse in Miramar: 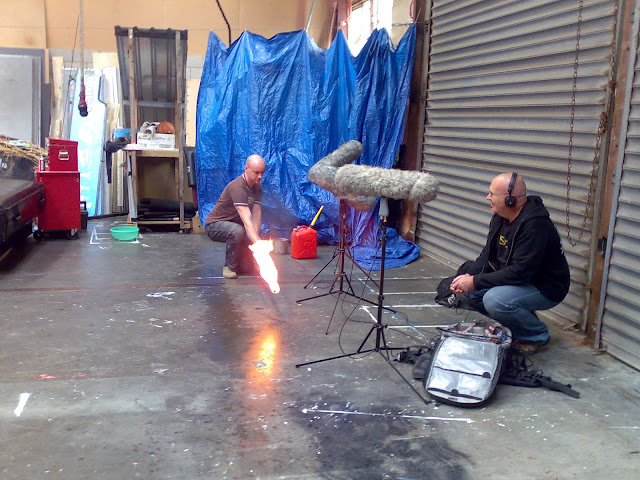 Ok, that’s not a camera. That’s three microphones. For one section of the film they wanted the sound of someone fire spinning. So I span fire while Tim listened and recorded. This was the strangest fire spinning gig that I’ve ever done. For much of the spinning we were aiming for a particular speed, very regular spinning and trying to keep the fire as close as possible to the mikes without actually whacking the fire against the expensive kit with flammable covers. Oh, and spinning without moving my feet at all, to avoid background noise. And stopping for the rain on the tin roof, or for planes to fly over. Yeah, lots to concentrate on, but it was a laugh.

After that weirdness, I helped a friend move. Fantastic view just above Aro Valley, lovely little spot, but one of those houses down a windy track from the road. I racked up well over 600 steps. The flat was below the roof in this pic: 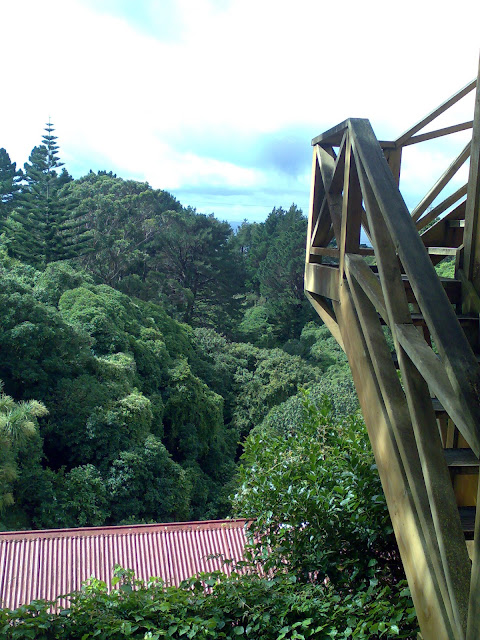 And then, there was chilling out there was bonus extra work work, which happens very rarely on a sunday evening. Hopefully it’ll be public very soon.

It seems I’m going to be writing some Ruby. I don’t want to go through the whole process of learning it, I just want it written. Maybe there’s some kind of C to Ruby converter? Come to think of it, I’d be better off writing what I want to write in BASIC and then having it translated to Ruby.

I wonder if it’s possible to write Ruby code that’s so bad that Will doesn’t just cry, but spontaneously combusts?

In other news, there’s a heap of online tools for determining everything about yourself that there is to know. Most are crap, but this life expectancy calculator comes highly recommended, especially as it reassuringly told me I’ve a fair chance of making it to 97. And the five love languages is recommended by a clinical psychologist of my acquaintance. (Please ignore the Christian & socially conservative layer draped over reasonably thorough research.) As you might guess if you’ve ever met me, touch is my main way to express love, with words of affirmation and quality time up there, and gifts and acts of service just not on my map.

In response to a discussion from last night, you cook hedgehogs in clay.

Carbon neutral by 2050! The government recently announced that New Zealand would become the first nation in the world to reduce our net carbon emissions to zero… Oh wait, no, that was Helen Clark in 2007. John Key’s government, instead, is thinking about announcing a 50% cut by 2050. They put out a consultation asking what NZ thought. Thus I’ve spent the last little while sitting down with assorted NZ climate scientists, putting together the Royal Society’s response.

If we’re after avoiding the worst of climate change, then that means limiting warming to 2 degrees Celsius*. That implies global emissions cuts of 50-85% by 2050. John Key, you’ll notice is proposing to scrape us in with a bare minimum 50% cut.**

Now, that assumes every nation in the world makes the same cuts. However, this brings up a question of what is a fair distribution of cuts? You could argue that it’s a common burden, so all nations should make the same cuts, rich and poor. You could also argue that rich nations have been industrialised for over a hundred years, have already had many decades of high emissions, and that rich nations emissions have caused the majority of the problem so far, so rich nations should make bigger cuts than poor nations. Of course, rich nations are arguing that we should all make equal cuts, poor nations are arguing that you caused it, you fix it. No surprise there, and that’s one of the major sticking points in getting an international agreement to fix the problem.

Anyway, back to NZ’s target. Hot Topic called it “inadequate”. The Royal Society, and my professional opinion, is that: “We hope to see a new target for substantial reductions”.

My personal opinion is that our emissions have risen 23% since 1990, then all this talk about targets is nice, but pretty disconnected from what’s happening right now, which is that the polices we have are not reducing our emissions.***

* Well, that’s actually for the 2.0-2.4 Celsius band, so this target is weaker than it appears.
** Now, all of this depends upon exactly how the climate responds and there’s some variability here, so a 50% cut doesn’t guarantee that we’ll avoid dangerous climate change. It looks like we’ll have a 55-90% chance of this working. Err… depending on the breaks. So this target is even weaker than that.
*** For bonus points, the Government’s position paper says that the emissions target provides certainty to business and investors about the direction of of climate change policy in NZ. Yeah, but NZ has had some kind of climate change policy for the last 15 years. What businesses need is not certainty about the direction, but a certainty about what the costs will be.