After all the discussion about SketchUp at the last Wellington Makers Meetup, I thought I’d share my thoughts on a book that’s particularly relevant to lots of us makers. Its titled “Google SketchUp for 3D Printing”, so we’re the target market. And… it’s not bad. It’s not great but it does the job.

I may be being too harsh here. Back when I was a coder for a living, I worked on the internals of CAD software (Parasolid, the geometry engine that’s inside all good high end CAD/CAM/CAE tools) and I got used to having copies Solid Works, Solid Edge, and NX on my desktop to play with. So I’m starting from the high end of parametric tools and working down. If you’ve never used a CAD tool before, then this will get you going and get you printing. Hell, chapter 2 is “First 3D Printout”, so there’s instant gratification.

The book covers the whole toolchain, from starting a drawing to ordering from Shapeways. There’s wide coverage of the tools & plug-ins that help SketchUp and Shapeways, such as Google’s 3D Warehouse, Google Earth, Thingiverse, and the SketchyPhysics physics plug-in. Our favourites, Ponoko, get a mention with a tutorial to create a test-tube holder.

Like plenty of technical books, it could do with the attention of a decent editor. Some explanations are over-detailed, some have gaps to keep you on your toes. But hell, it only costs US$40, or less than US$30 for the ebook. This book won’t turn you into a SketchUp guru, but it’ll get you making. 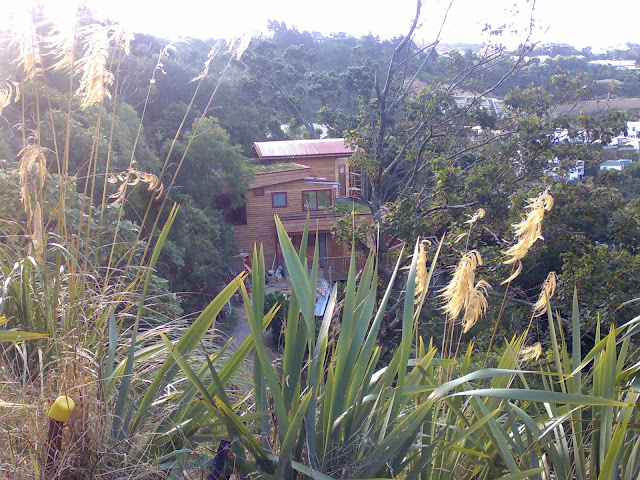 Anyway, a few inside pics. As you can see, there’s still plenty to do, most of our gear is still in boxes, and building gear is scattered throughout the place. Most walls need either earth plaster, lime wash, or better lime wash, coz a few patches of the early stuff didn’t stick. (Minus several billion points to anyone who points out that the only photo of tieke is in the kitchen.) 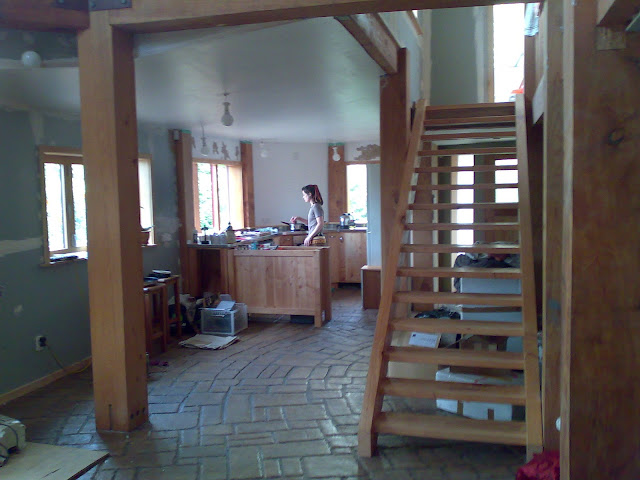 Every main room needs scaffolding, a mitre saw, twenty litres of vegetable turpentine, and a tissu hanging from the ceiling: 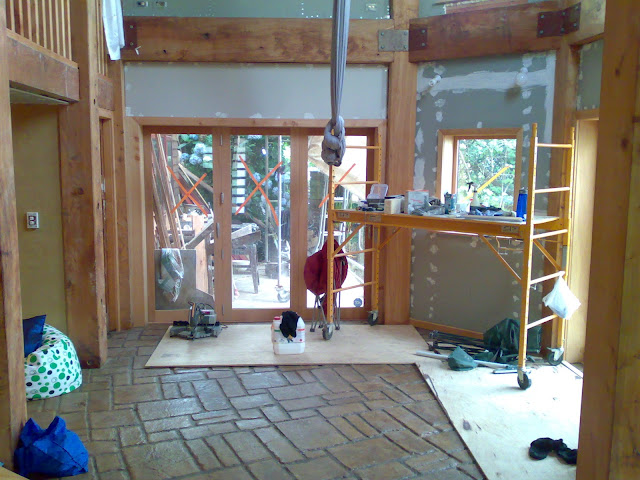 Snug, now with extra bean bags not yet shown: 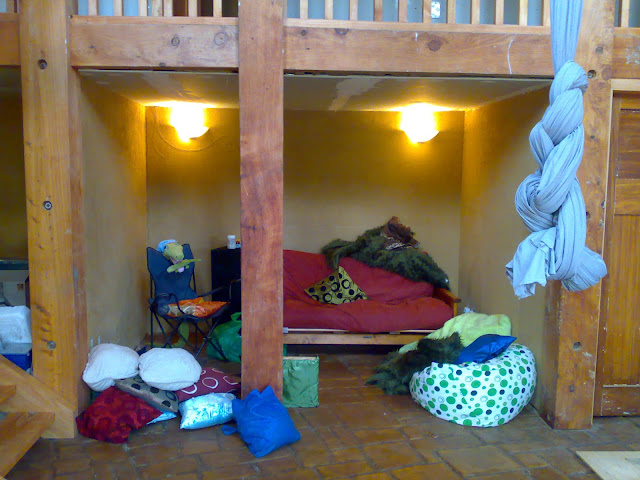 You forget just how sick most New Zealand houses make you. Our last place had been renovated, but still I’d wake up with sore sinuses every morning from the damp and mould. This place, I wake up.

The twittoverse has been abuzz over Neal Stephenson’s article on rockets and innovation. Rockets are our only means to reach space and Stephenson’s claiming that we’re locked in this state due to path dependence, citing a list of political contingencies that provided the research money to get rockets working so we could threaten to drop nukes on those godless Communists/Capitalist running dogs (delete as appropriate). Basically, it’s political determinism rather than technological determinism.

Alternatively, there’s this article from Newberry which usefully points out where Stephenson is factually incorrect (i.e. just about everywhere) then misses the point completely by waffling on about turbines. It’s also factually incorrect, badly edited, and occasionally incoherent, as pointed out by some of the smarter people in this debate. Still, buried somewhere in that article is the idea of closed technological loops – families of technologies that support and sustain each other and thus grow symbiotically and rapidly. The classic example is iron & coal & steam, which together formed the basis of the industrial revolution. It’s like rock, paper, scissors, only everyone wins. Coal refines iron ore to iron, iron and coal make steam engines, steam engines power coal mining and factories, steam engined iron railways move iron ore, coal and factory goods.

In response to this discussion, I’ll put forward two ideas of my own:

Firstly, we know very little about how innovations succeed. We know how innovation works as a process – intellectual freedom for researchers, strong links between research and business/end users, lots of bright people with experience, and a balance between state and private funding so that at each stage of development there’s money available. We’ve had enough nations take this approach, for long enough that on aggregate, this system works. What we barely know is how to predict which innovations will work. If we did, then venture capital investments wouldn’t face such poor odds.

Secondly, what seems to make individual innovations work is a complicated mix of many social factors and fundamental technological difficulty. The social factors include markets, regulations, social needs, the impacts of other technologies, the rate of development of other technologies, and the sheer resources that society sees fit to put towards a given innovation. Technological difficulty is what you don’t know that you don’t know. It wouldn’t be innovation if you did.

So, here’s some technologies that are not going anywhere in a hurry and haven’t been for quite some time:
1) Fusion power – It’s just technologically hard. Ask an researcher and they’ll tell you it’ll be working in about thirty years. “Thirty years” is what people say when they don’t want to say “no idea mate, but please keep giving us the cash”.
2) Satellite-based mobile telephony – Perfectly feasible, technologically, but land-based approaches started earning money faster, kicking off sufficiently good service that satellite-based approaches were only left with a tiny niche.
3) Space-based solar power – Again, perfectly feasible, but land-based is cheaper and will always be so. Now that land-based approaches are growing at 30% per year, providing an income stream for competitive companies to do more research into driving down the cost of land-based solar power. (Yes, some of that research will help lower the cost of space-based solar power, but it will lower the cost of land-based solar power more rapidly than space-based. Hence an ongoing increase in the cost advantage of land-based.)
4) Reusable launch vehicles – Meh. Rockets are cheap enough, in comparison to their payloads, and the demand for launches seems inelastic. Dropping the price of launches by half isn’t going to double the number of launches.
5) Segways – “Cities will be built around this device.” Err… no, we’ve already built cities. They’re for cars (and occasionally for pedestrians).

We’re slowly getting our heads around the fact that we’re living in our house. It’s what we wanted, solid, durable, open, healthy, beautiful. I can’t quite say warm yet, as there remains numerous holes in walls yet to be filled, and we’re far from finished but for now, have some pics: 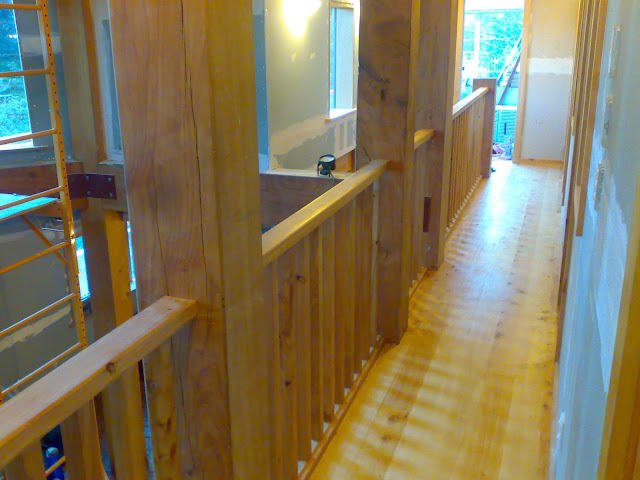 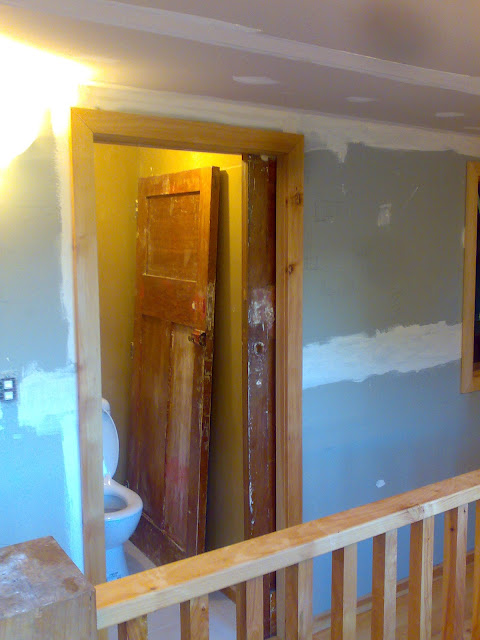 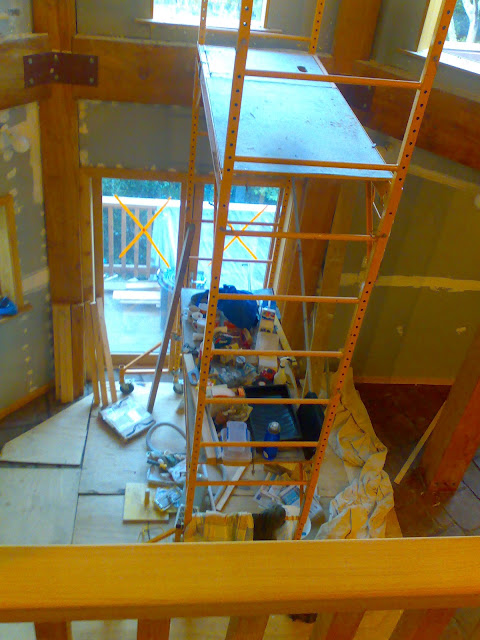 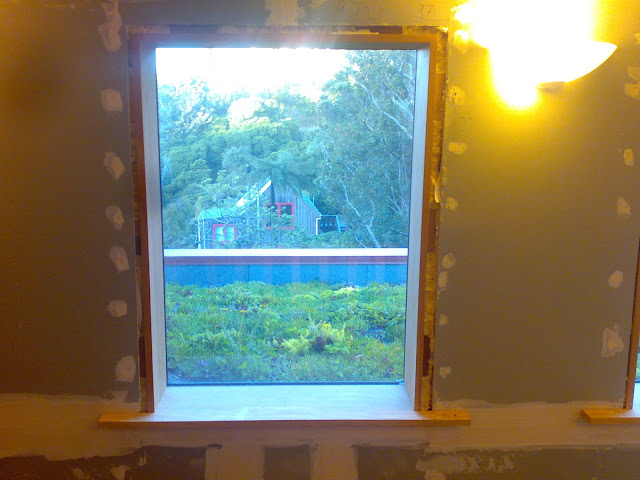