The smallest airliner in the world: 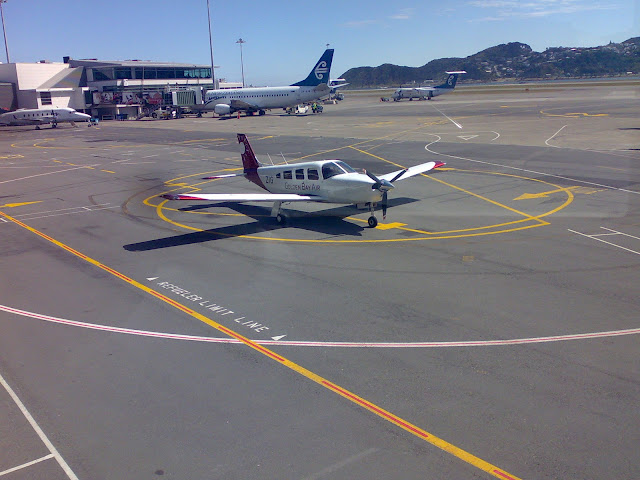 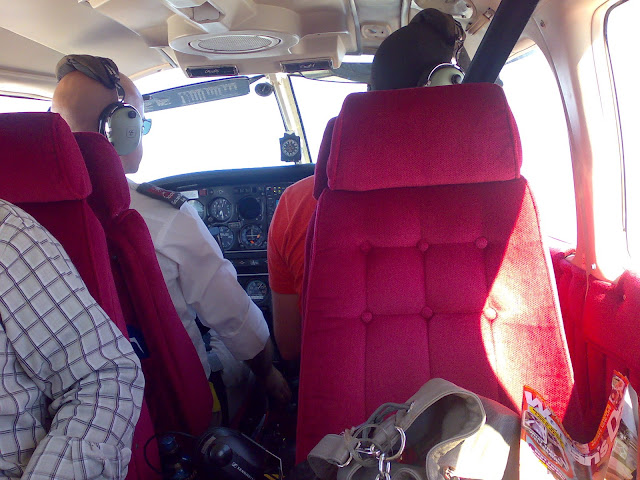 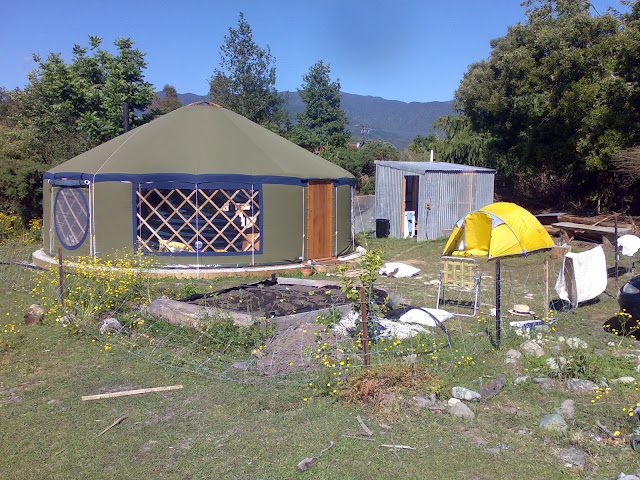 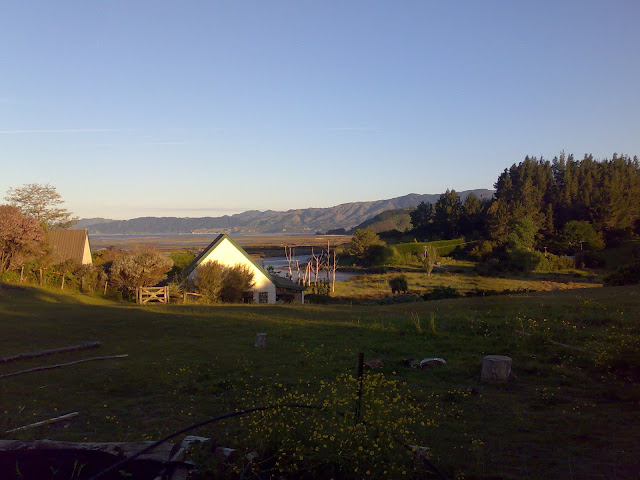 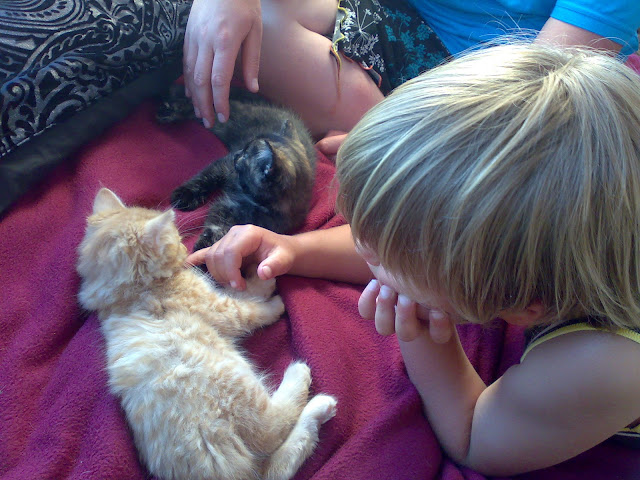 Wharariki beach. The rocks erode away to make passages through at sea level: 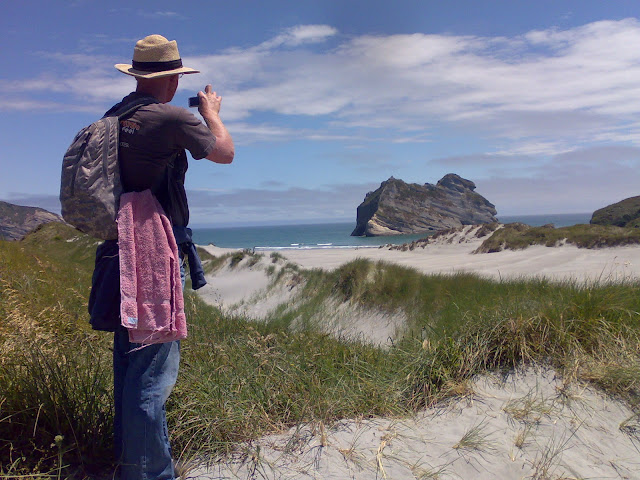 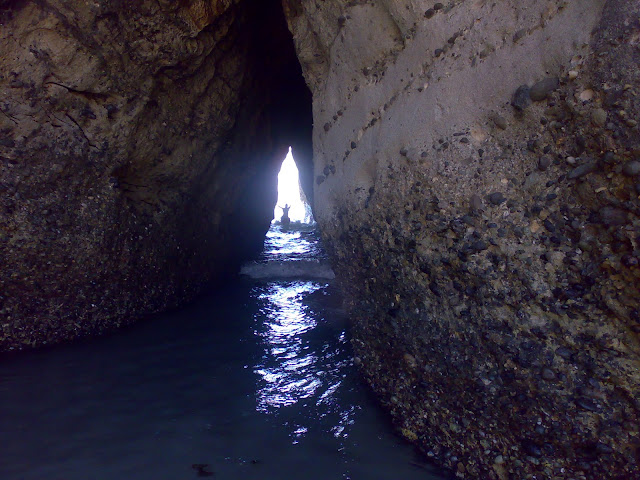 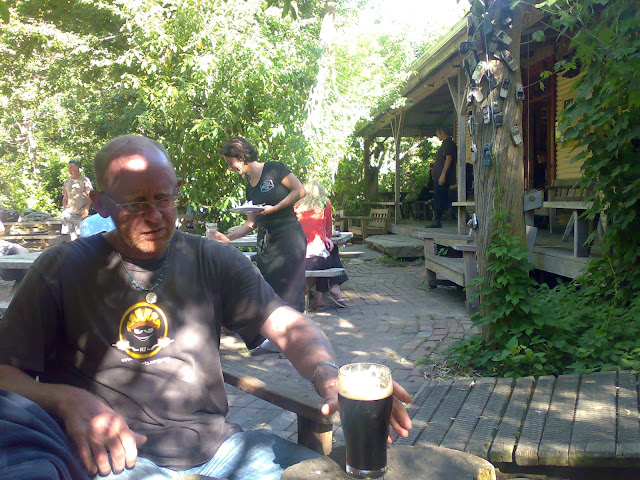 Bridge with a seat in the middle at the Tui Community: 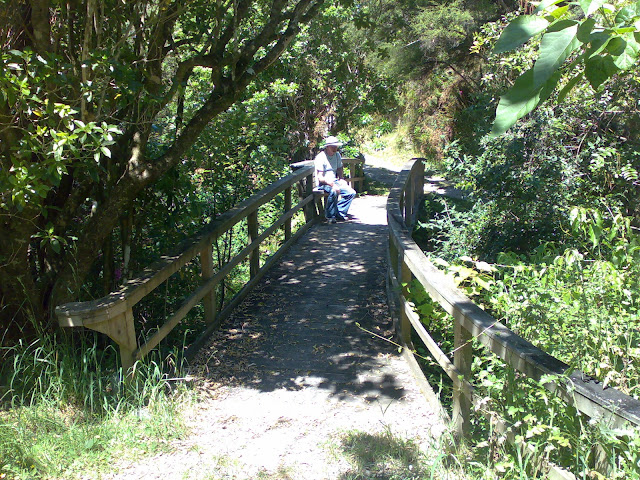 From an earth roundhouse: 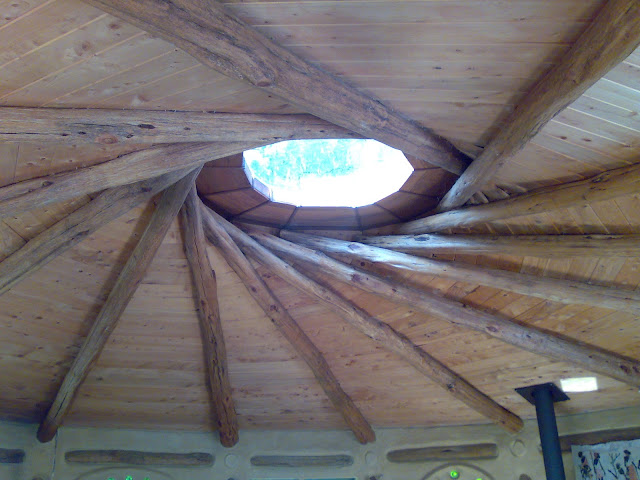 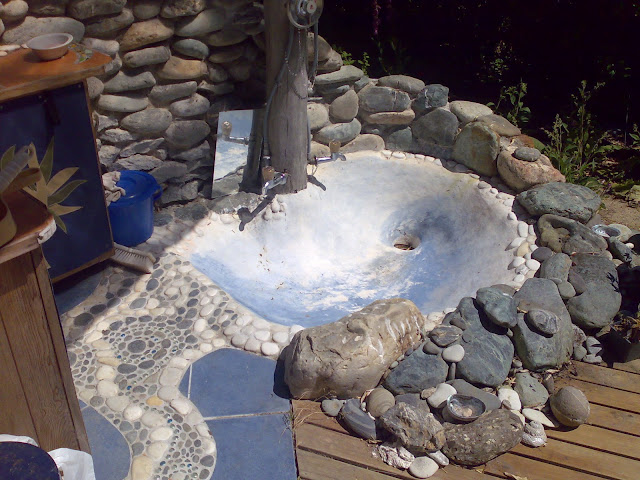 Coming back over the Marlborough Sounds: 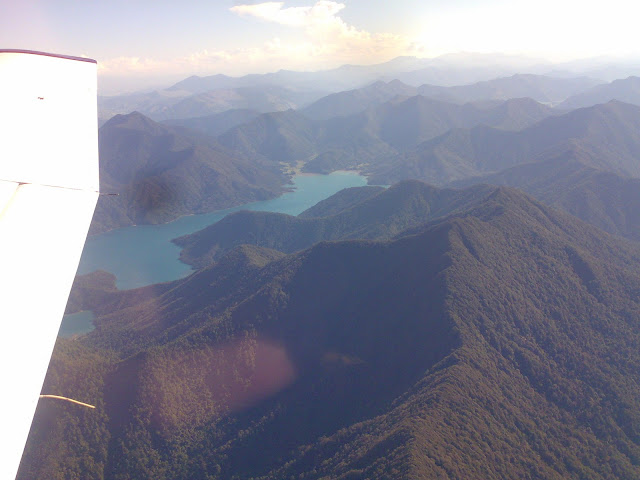 … coz Andrea has a gig and I need a break. This is possibly the first weekend of not working on the house since forever, and that’s a while ago.

Plastered more over the last two days while the Jarrods were laying the floor upstairs. Macrocarpa, tongue & groove, it looks quite nice. Tiler will be finishing off this weekend, internal doors on site and ready to be fitted, last bits of gib stopping to be done before electrician can come, fit the switches, and finish off. So, perfect time for a break, eh?

Also, wtf body? I am walking around and my body is going “omg so hot time to faint”. The temperature is almost pushing 17 degrees Celsius. Have I forgotten to shed my invisible winter fur coat? The only solution may be to give up on wearing any clothes. Or should I move to Norway, where today it is “Fair. -7°”? Is my internal thermostat ratcheted up so high that I can do a fair impression of the “Meanwhile in Finland” guy?

This weekend, our friends came over and made a mess all over our walls. Err… thanks. 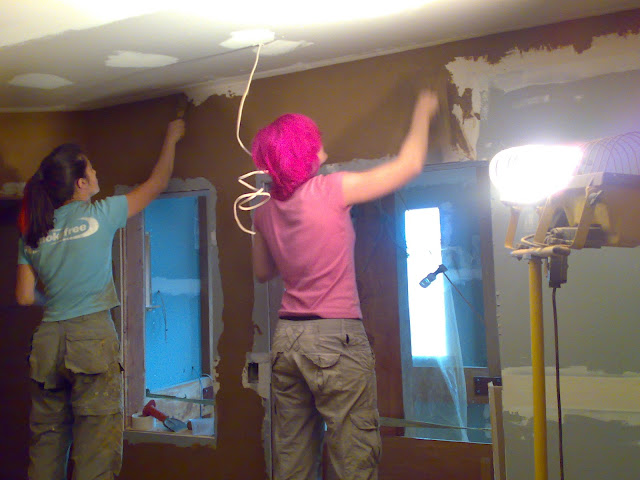 This one looks rather embarrassed to have been caught making such a mess: 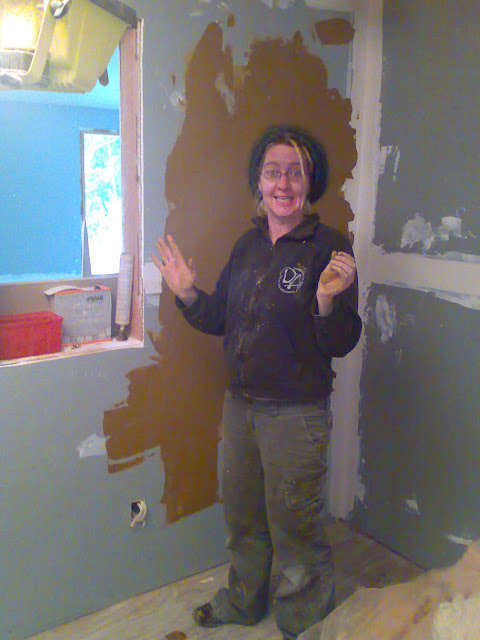 And there’ll be more to do next weekend.

Hell, now’s the time to use up all the holiday I’ve saved for just this. So I’ll be on the house four days a week till January (or I collapse from working seven days a week).

Last weekend we trialled the earth plaster and made up a heap this weekend. This is pretty simple stuff, clay and paper and water and that’s it. Of course, it’s got to be the right kind of clay, and the paper needs to soak just so, and the water needs to be the right amount of water.

The paper gets torn, not cut, to open up the fibres, then soaked until it will turn to mush: 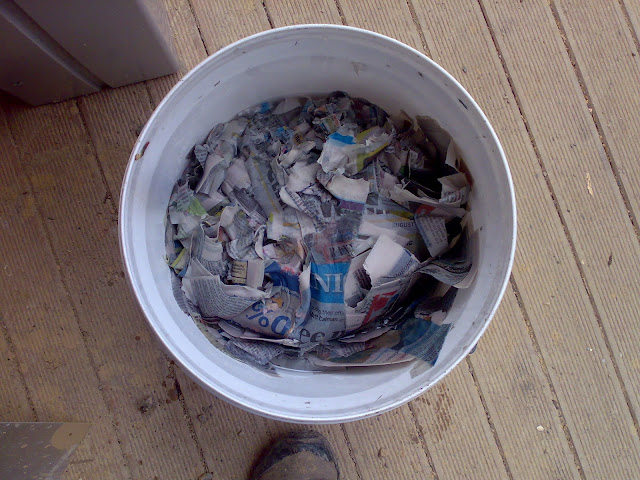 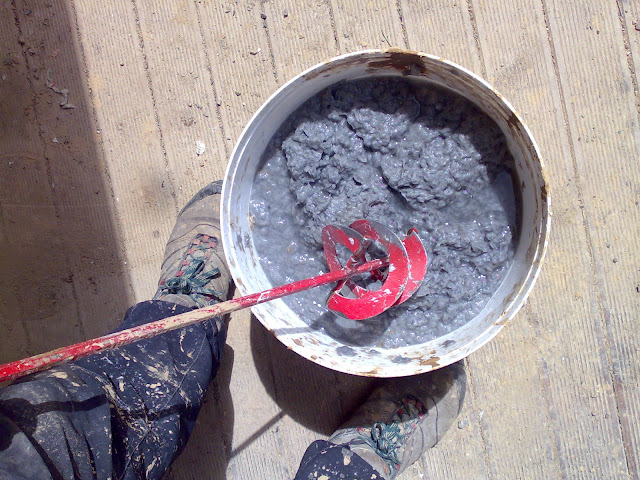 The clay soaks until the lumps break down: 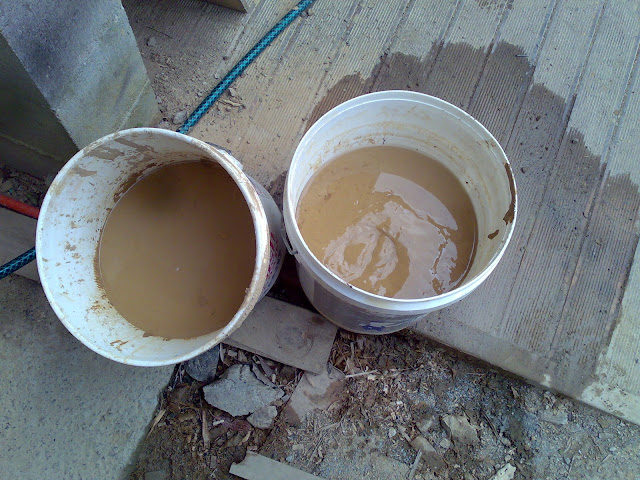 Cass & Jeremy came to give us a hand. The drill Jeremy’s using got very hot, what with mixing stuff all day. Cass is pouring soaked clay into a mill/sieve, for separating out the grit. 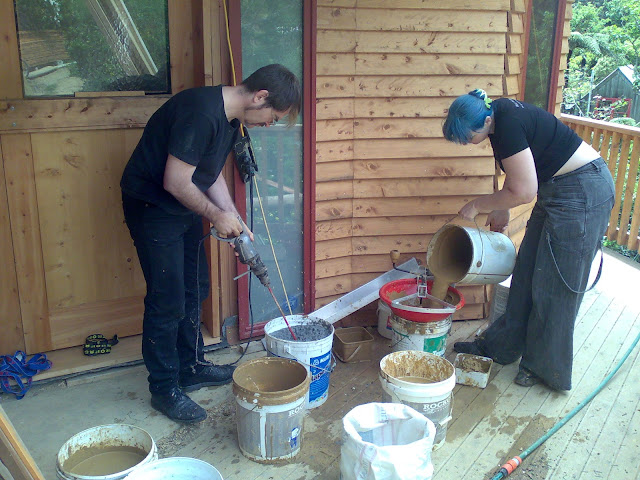 You make up the clay and paper mix very wet, so stirring is easy. Then it goes into bags and you hang it for a week. The water drips out and the plaster ends up good and workable. 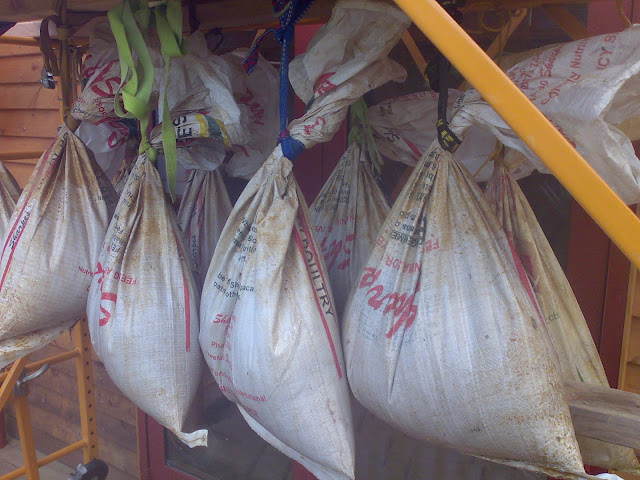 This is the first skim coat. It’s going to be much thicker than this, and with a lime wash over the top. 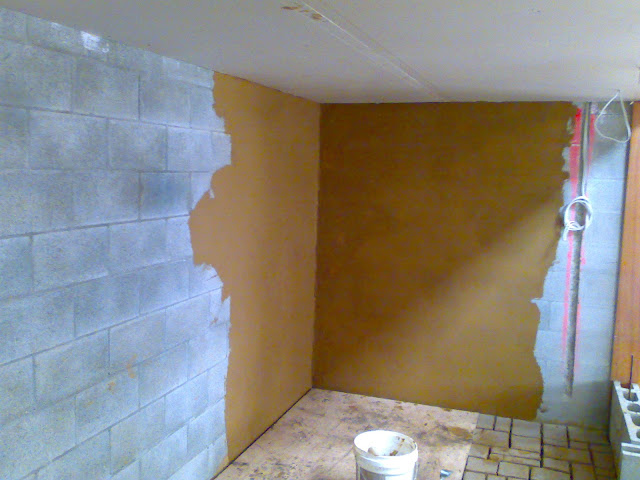 Thus we’ve lots of plaster ready for this weekend. If you want to come and play with mud, let us know, and we’ll make sure we’ve enough trowels and floats (and we’ll be very grateful for the help). 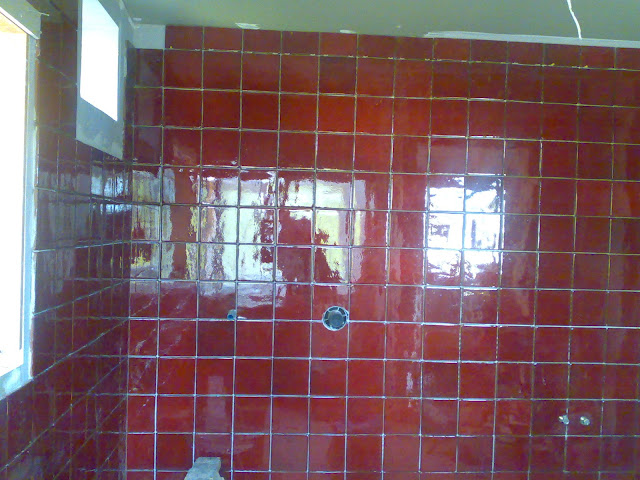 So far, the multi-headed national e-conference on sustainability is going well. Most interesting talk that I’ll mention here concerns replacing diesel mowers with sheep on wineries. They have to be short so they eat the grass, not the grapes and vines. Hence:

Apparently one round with the mower involves driving 30,000 km between rows of vines, hence is dull and expensive.

I can’t attend the funeral today, am hosting a conference and I think they’d notice if I nicked out.

Look after each other, ok?

This weekend we’re going to be making a start on the earth plastering.

From the Earth Bag Building blog. We’re not doing it quite like that, coz we’ve different earth.

So come along, get dirty, and put some earth on some walls. Or make up some more earth plaster. Or just help with digging. Either way, you’ll get good and properly dirty.

If you haven’t been before, no probs, the house is in Brooklyn, I can probably sort you a lift in the morning, or there’s buses, or it’s easy to find if you’re driving. We’ll be there from 10 am saturday, from 11 am sunday.

If you can’t make it this weekend, don’t worry, there’s plenty more to do…

And in other news, here’s Kaisa’s "Travel Guide to Stockholm", explained through interpretive dance:

Someone I know says:
“If it helps at all, I can tell you for sure, that when I did a similar thing, there was not anything that my friends or family did or could have done, that caused it, or that would have prevented it. Some crap happened, but the real problem was how I processed it and how I thought about life in general. And I was not even battling a brain chemistry that was forcing me to think in those ways, which I suspect your friend was.”

Shaun Oshman is one of those positive, keen, open, friendly guys. In fact, he’s such a nice guy that I’m pretty sure he does it deliberately, just to make me feel bad about being such a grumpy bastard.*

While he was teaching in Wellington, he met Annabel Reader, who some of you know from circus, Empress Stiltdance shows, or her own contempory dance work. They got married at the start of 2009 out at Makahika in the Tararuas: They moved off to Boulder, Shaun being from those parts and Annabel wanting more performance work than is easily found in Wellington. He started a bicycle-based, sustainable IT support company, which is the kind of thing you do in Boulder.

All pretty good going, yes? And then Shaun was diagnosed with leukemia. Hairy cell leukemia, to be precise, a rare, uncurable type. However, with treatment** he has a 95% chance of living a long, productive, and happy life. Sweet.

Buts here’s the kicker, he’s in the States and despite having medical insurance, he still gets stuck with a US$ 10,000 bill. We can leave off discussing the morality of charging sick people money, but for now, if you want to help Shaun and Annabel out with their medical bill, you can.

* – Yes, I may be projecting my own inadequacies onto an undeserving target here.
** – Well, the treatment is chemo, also known as ‘killing the cancer slightly faster than it kills the patient’. Which sucks, but not as much as popping one’s clogs.

I know many of you have offered to help with the earth plastering for the inside walls of the house. Here’s advance warning that we should be getting on to it next weekend. Come along, it’ll be a wonderfully tactile experience (by which I mean messy).

So this weekend, we (meaning tieke, myself, and a veritable horde of helpers) moved nine cubic metres of soil up two storeys onto the roof, spread it, leveled it, and made a good start on the planting. 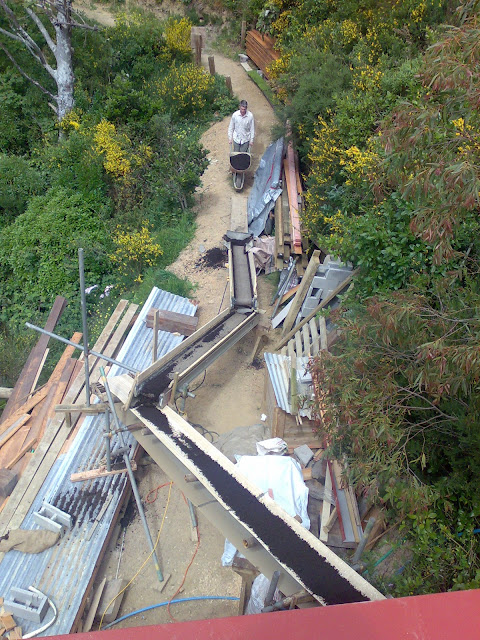 And then you spread the earth across the drainage mat on the roof. With minor complications of putting round pebbles around the edges and drains. 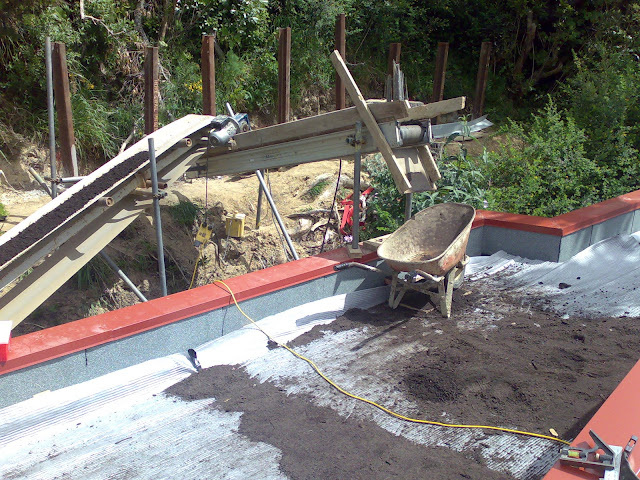 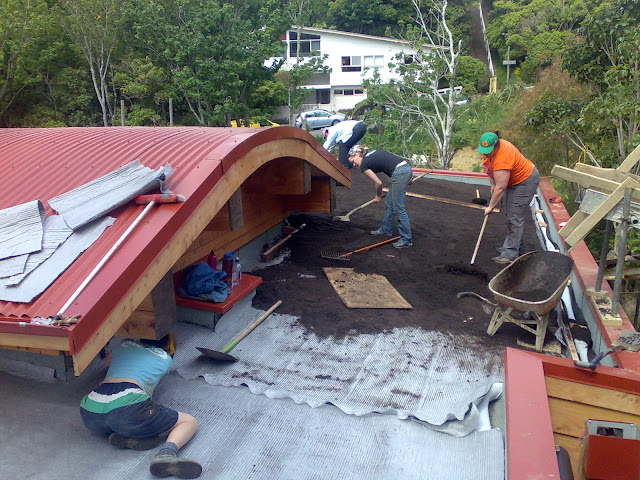 And that’s as far as I got with photos from the process, coz mostly we were running about, trying to keep the everything going, removing bottle-necks in the process, finding jobs for everybody, failing to provide refreshments, and trying to get some shoveling in myself. tieke has more pics from Sunday, I think.

We got all the soil done by 4 pm on Sunday, and then started on the planting. That goes much faster, I think we managed about a quarter of the two thousand plants before it got too dark to see.

The rest of the plants will be planted over the next three evenings and then I might have to take Thursday off to get this finished. Hell, I’d like to take today off but I’m buggered I’ve got important work to do, honest.

And then after that, there’s copious watering to do.