I grew up with concrete. I think I’m over it, but I might be wrong.

My dad, being a civil engineer, used to have a stack of Concrete Quarterlys on the bookshelves by his patriarchal chair. CQ was an odd thing, it was a magazine about architecture that didn’t bother with breathless theoretical philosophising, it just said here’s this new material, concrete, and we can do wonderful things with it.

Thanks to the internet, the whole sixty years of it is available for free. I would have been seven when I read it first and I remember.

CQ now has strange overtones. I remember the sheep-covered Underhill, (page 2-8, Spring 1978), an underground house that convinced me that there could be a house that I could want to live in. Aside from that misplaced venture into anti-architecture, CQ seems like a hangover from the bold 1930s, when reinforced concrete was new! and exciting! and dynamic!

The reality, of course, is just plain ugly. CQ was printed in black and white until the 1980s and that alone makes concrete look good. I rode past the offices of Metal Box every day (pages 12-16, Spring 1977) and the photos make it look like a space station.

Sadly, what looks stark and bold and daring in black and white just looks grim in colour, because that colour is dull grey, crumbling and stained by rust and moss and pigeon shit. So instead of the bright new hygienic future of soaring towers and soaring expressways, we got harsh and hostile council estates and shopping centres best used as urinals. Instead of Corbusier’s sleek utopias, we got cities that were sterile, isolating, and tragic.

Fuck that and fuck you, memory.

There’s an inevitable debate in NZ, about what it means to describe yourself as a “New Zealander”. The 2006 census had tick boxes for NZ European, Maori, Chinese, Samoan, Indian, and so on. It also had a write-in box, with 10% of the nation choosing to call themselves New Zealander. And then we can all get suitably uppity about what Paheka means, or whether people should tick one box or more.

END_OF_DOCUMENT_TOKEN_TO_BE_REPLACED

Someone is explaining to me what a heading is on a web page. Apparently you can have different kinds of headings, in levels.

We’ll not be working on the house this saturday but we’ll be up there sunday from 10-4. Any help gratefully appreciated.

Thank you for taking the time to write to us about your concerns regarding climate change science and the actions this nation is taking in response.

We are aware that several individuals have claimed that climate change is not connected with human activity and instead is caused by the sun/cosmic rays/communists/carnivorous lizards that wear the skins of men/feminists [delete as appropriate]. Despite the fifty pages of commentary that you provide explaining your theory, this organisation will continue to base its position on the scientific advice from the majority of climate scientists.

Thank you for raising with us the controversy about the integrity of these scientists and the temperature record held by the Climatic Research Unit at the university of East Anglia. We note that three independent reviews of these claims have taken place and that no evidence of conspiracy, manipulation or untoward activity has been found. We cannot find ourselves in agreement with your view that this outcome shows that all three independent reviews have been subverted by “the One World Government headed by Al Gore”.

We have no comment to make on Al Gore’s religious views and we have no evidence that he has ever indulged in child sacrifice.

The recent home insulation standards relate only to the use of double-glazing and fiberglass batts and blankets. They make no reference to “enabling government surveillance” and are not intended to limit a home-owners property rights. The standards are not expected to “sap and impurify all of our precious bodily fluids” or create buildings with weaknesses against hypothetical microwave-based antipersonnel weapons.

Thank you again for taking the time to write.

We’re getting ready for closing in the interior walls with gib (plasterboard for you non-NZers) so a welcome horde put wool insulation everywhere, mostly in the walls and ceilings, but a reasonable amount in noses, eyes, and everywhere else. We’ve also the electrics and plumbing installed, switch boxes and sockets everywhere, gas pipes, water pipes, data cables, speaker cables, and probably several hand tools that we’ve forgotten about hidden away in the walls.

So yes, lots done and it’s a good feeling. 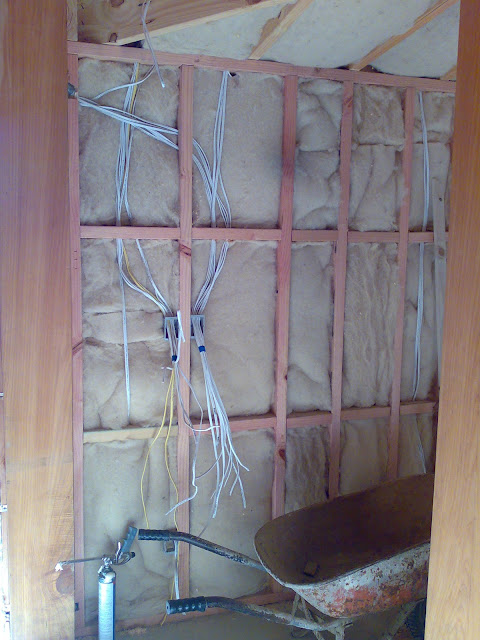 Much of this was their fault. Other people are also to blame. 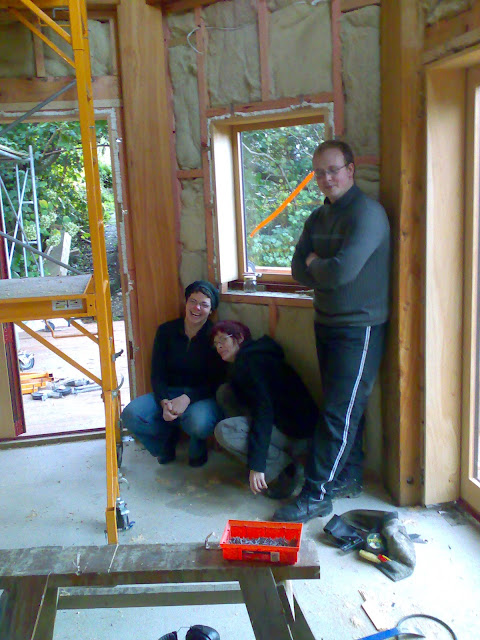 I’m calling this Wiring Central. On this wall goes the mains switchboard, the internet tie-in, and the alarm control box. It’s in the storage room at the back so it can all live on the surface of the wall, for easy future messing with. Data goes in three separate conduits to the three out points, miles away from power cables. 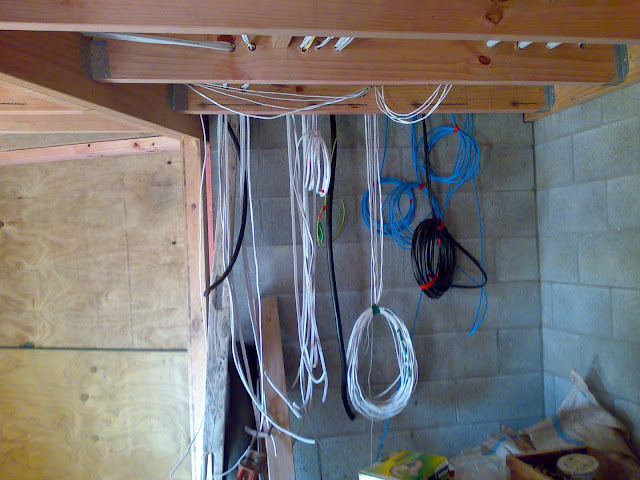 The trapeze space opens up with double doors to the north, triple doors to the west. With all the doors open and folded back, there’s barely any walls between yourself and all the bush around you. Here’s Andrea, outside, and seen through the house, from the other outside. 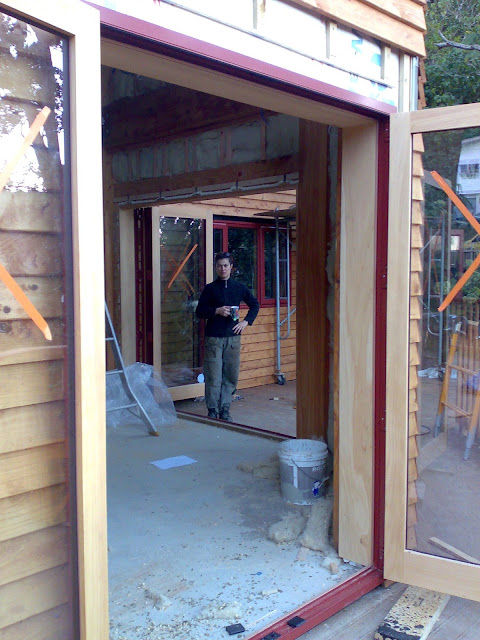 Understandably, other projects didn’t get much chance, but the monster LEDs arrived for the next shiny thing. Here’s two of them, Cree MC-Es, four Watts each, red, green, blue & white. Each will kick out about a third of the lumens of the Mitochondrion. The left one has a lens on top to focus it into a more useable beam. That’s decently sized chunks of aluminium that they are mounted upon, they’re listed as “metal-cored circuit boards”, but really, it’s a slab of aluminium with some ink and soldermask on top. Happily, it all implies a decent light output. 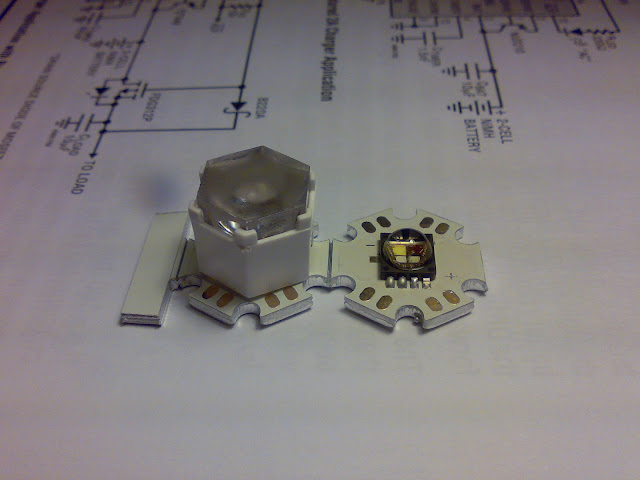