NZ Listener’s 2009 Power & Influence List, environment section, has Brent Clothier new in at number 4, for his research on virtual water. From the write-up:

“The Plant & Food Research soil scientist contributed to a paper this year examining the water footprints of various products and identifying some of the criteria that may be used for measuring that impact.”

That’s the paper I put together for RSNZ, so I’m feeling like I’m getting somewhere in this game. The paper itself and previous discussion on LJ.

In summary: Ffs, just get on with it.

END_OF_DOCUMENT_TOKEN_TO_BE_REPLACED

“In the wonderful future, all our cars will run on hydrogen” – as said by approximately every futurist for about thirty years. So where is this hydrogen economy then?

Hydrogen is an energy carrier, like electricity. You have to put energy in to make it, and then you get energy out at the other end, from fuel cells that make electricity to turn motors. Fuel cells are clean, therefore hydrogen is clean, right?

END_OF_DOCUMENT_TOKEN_TO_BE_REPLACED

Things I won’t work with, a compendium of truly terrifying chemicals. Sample:
“The experimental section of the paper enjoins the reader to wear a face shield, leather suit, and ear plugs, to work behind all sorts of blast shields, and to use Teflon and stainless steel apparatus so as to minimize shrapnel. Hmm. Ranking my equipment in terms of its shrapneliferousness is not something that’s ever occurred to me, I have to say.”

A Tobin tax would be a very good idea. It’s a tax on financial speculation. Others seem to agree – google trends for “tobin tax”

Spank those objectivists! Objectivism as a trivial and useless solution (Coz this is artistic, there’s some wanky words mixed in with more pics)

New Zealand’s energy system is pretty unique. We’re isolated and can’t trade electricity with anyone else, we’ve got more hydro than nearly anyone else, geothermal’s big here, and we’ve vast amounts of coal that we’ve yet to dig up. Oh, and governments that have varied between big state projects and market fundamentalism.

So it’s no surprise that there’s lots of research on our energy system. In fact, there’s a special issue of a journal called Energy Policy devoted to NZ (September 2009 issue). I’m reading through this, as the work tails off from my current project (Project “Jump into the Firing Line”). I’ll be looking at a couple of the articles in detail, as they’re fairly key to where NZ can go with energy (and they’re not online for free, so it’s not like many people can just go and read them).

Blockies have been and blocked the top level. Yay, and also oops as I discovered the blocks that were going to be keyed in, but were too small, so they just went “it’ll be alright”. It was alright, until I leant on them. Now they’re being redone and properly this time.

These are looking west and east, not north and south like the previous pans. Bedrooms are to the west, bathroom to the east.

The last of the foundations and blockwork should be finished off today. There’s three levels to the house, each dug back into the hill. The back half of the house is concrete; the front will be wood. It weirds me out that I’ll never again see the back of these walls, once they’ve been filled in. And no-one will, hopefully not for several hundred years.

Middle level, view into the hill from the living area to the toys store, snug, and office. Stairs go up from the centre of the pic to the left.

Looking down at the middle level, from above the office. The bedrooms go on top of these walls and columns. The white slabs are insulation. Insulation is good. (At this point, many Kiwi’s are going “insul-err-what?”)

We’re filling in the gap between the hill and the back walls with free-draining crushed rock, shoveling the rock down the chute from the road above (off to the right). This worked fine if the rock was free-flowing, but much of it wasn’t, resulting in chain-gang style hordes of people with shovels and harsh language.

Suggestions on a free dvd ripper?

For backup purposes, of course.

1) Were you always a smarty-pants, or did it happen over time?

I knew my brain worked faster than my teachers, I also knew they had a substantial head-start, so I couldn’t just tell them they were wrong and leave it at that. I had some catching up to do first. I did tell them that they were boring though.

2) You grew up in Thatcher’s England, which was a) terrifying, and b) quite shit, but there must have been some fun times. What’s your favourite childhood memory?

Climbing up mountains in Skye, feeling some fresh air, and getting away from everyone in Britain. I was a kid and didn’t realise it at the time, but it got me thinking that things did not have to be the way they where and with a bit of effort on my part, things might end up not quite shit.

3) You and the lovely Andrea are quite phenominal acrobats. What’s your favourite thing to do, acrobatics-wise, and why?

Butterfly roll down on tissu with a double wrap on the upper part of the tissu. It’s slip knotted round my hips, I’m horizontal, no hands and you control the roll down just by shifting your weight. It’s a cross between flying, balancing, and the world’s hardest core exercise, all in one.

4) When are you and Joel going to join up and create the NZ version of SkyNet?

By Skynet do you mean hot, hot love? That’ll be when

5) You’ve known me for a lot of years, and have gotten closer to me than most people. What’s your favourite memory of us?

That time we had Adventures! Oh wait… that hasn’t happened yet. But it will.

Will offer favours for a Wave invite – delivering messages, sewing on buttons…

For us, this weekend was mainly digging. House pics later, but for now, tieke demonstrating the size of the holes, and the view from the kitchen window, once we’ve got a window and a kitchen”: 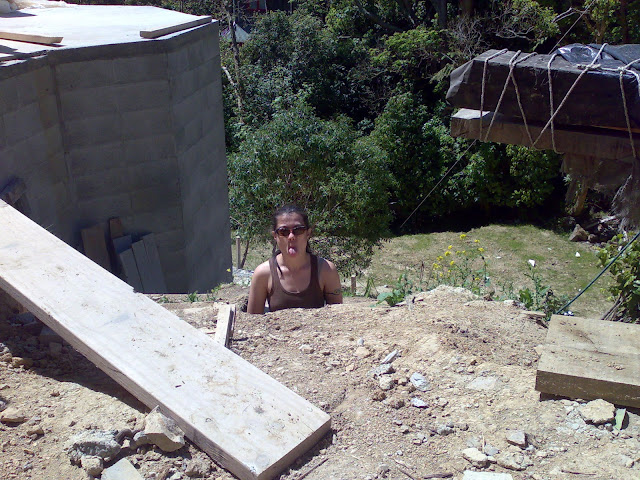 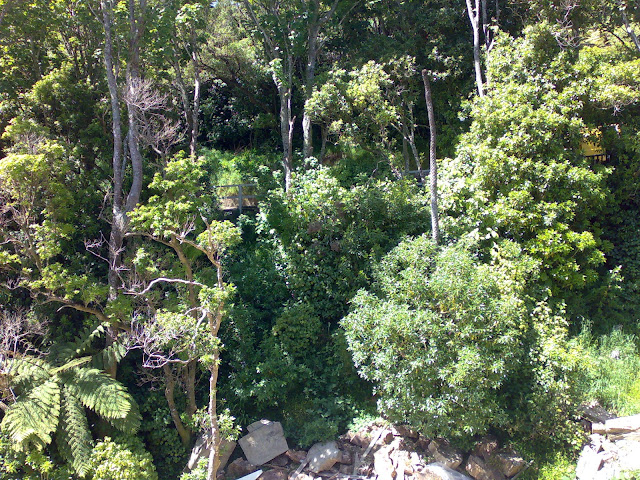 And progress on the other other project, involving plumbing, tiny, tiny plumbing:

Sorting these bits out took about a month of spare time. Most of that was learning what bits were available, how to specify them, then where to get them from. Assembly took about twenty minutes.

We also went hunting for toilets. I wanted to buy the Evacuator 5000, with Turbo Vortex Action! Sadly, that product only exists in my head, we may end up with a Cygnet.

DimPost Profile: John Key
“It is a typical Saturday morning in Wellington for John Key; like most former merchant bankers who have been elected head of government he wears casual high-threadcount slacks with a shirt that flatters his waist and accentuates his dreamy brown eyes.”

Garth George: We should all salute our wonderful PM
“But that really sums up Mr Key. He is a man of the people, as yet unspoiled by the poisonous atmosphere of power politics, and in spite of his position and spectacular wealth remains one of us.”

The New Zealand Herald: Key – the Cold Hard Facts
“Freelance journalists Kevin Taylor and Jason Ede ask the difficult questions about the mysterious past and future plans of National leader John Key. The result is a candid unflinching take-no-prisoners account of Key as a husband, leader, dad and the best mate our nation could ever hope for.”

Galleries are strangely sterile and passive places. Kusama’s stuff should be at a festival, in a forest, at night, with huge sounds, excessive UV, being jumped on by five thousand ravers, all off their tits.

But then again, it was free.