Each beam has seven square metres of surface and takes approximately forever. Each one also wears the edge off a tungsten carbide blade and that gets expensive. On the up side, if anyone wants any wood shavings, just let us know. 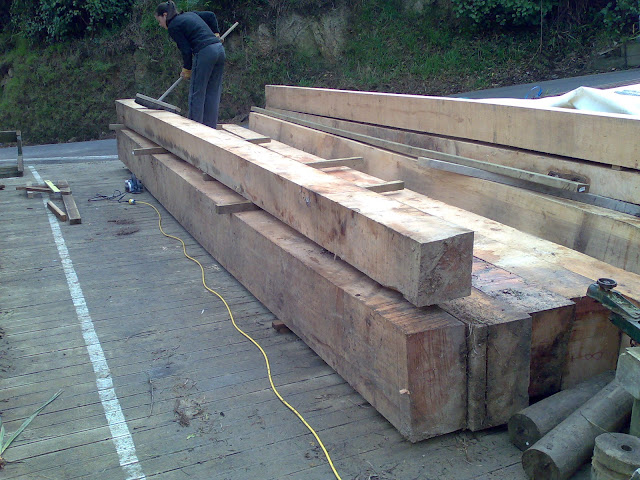 These beams are also a tad hefty, I’m guessing 250-300kg each. Moving them around requires leverage and patience, turning them over requires the World’s Largest Spanner, which I made from nails and scrap wood: 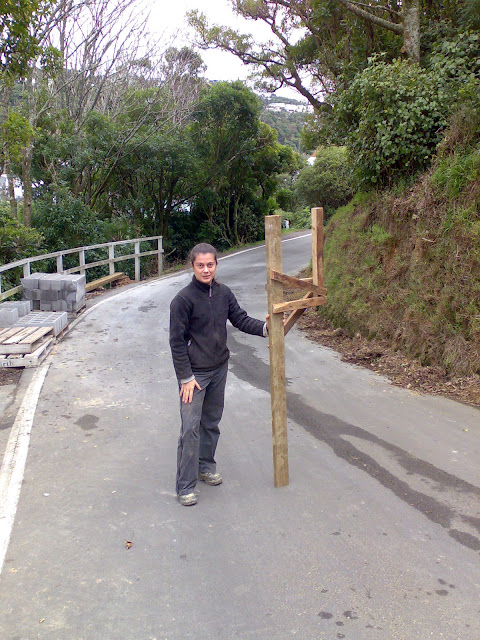 That’s the Mark 1. It worked well on the smaller beams, but for the biggest ones, nah. So, with further triangulation and massive over-building, here’s the Mark 2: 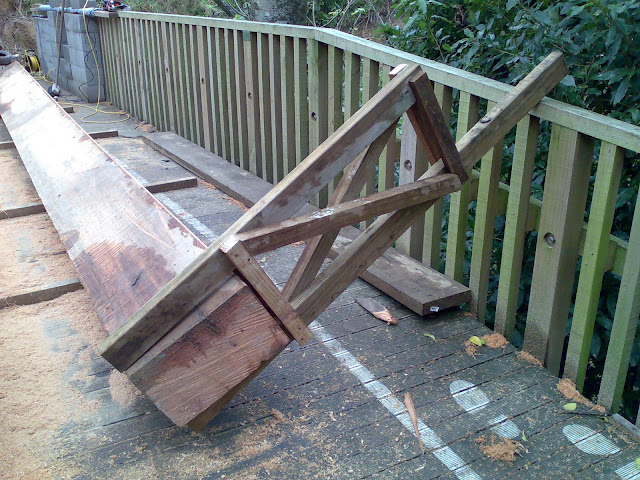 These beams are so big I need the whole 4000 pixels to show them:

It turns out that my “I don’t know what you’re asking for” face looks just the same as my “I think you’re an arse” face.

The Mitochondrion coding process seems to run something like this:

7 pm – 9 pm: Work on the 40 Mb spreadsheet that mangles the data from the patterns into the code that loads the data onto the Picaxe. There are four unevenly asynch counters here to do the mangling. Code from spreadsheet not working.
9 pm: Give up, shower, food, paper, wow.
10.30: Go to bed
10.35: Realise I can concat that chunk and that chunk, making spreadsheet one third the size
10.40: Realise I can autogenerate two of the four counters
10.37: No wait, three of the four. Woo!
10.44: Realise I can put that and that together to generate the constants table as well
10.47: You know, this would be better as a PERL script
10.48: Or maybe Ruby
10.49: I should rewrite the entire system in LISP
10.50: Realise I can’t concat that chunk at all, making entire set of brainwaves irrelevant. Bother.
10.51: Get kicked by

It was bloody freezing this weekend, so we decided to spend our time somewhere warm. Yup, outside, up at the section, but sheltered from the wind and in a major suntrap. (Who am I kidding, it was variable, occasionally only two layers were needed, occasionally five.)

We’ve had the slab poured for the workshop. Blockie is next, so we slid the blocks down the chute and stacked them ready. tieke pointed out the need for there to be no earthquakes in the next few days, so keep assorted members crossed, cheers all. 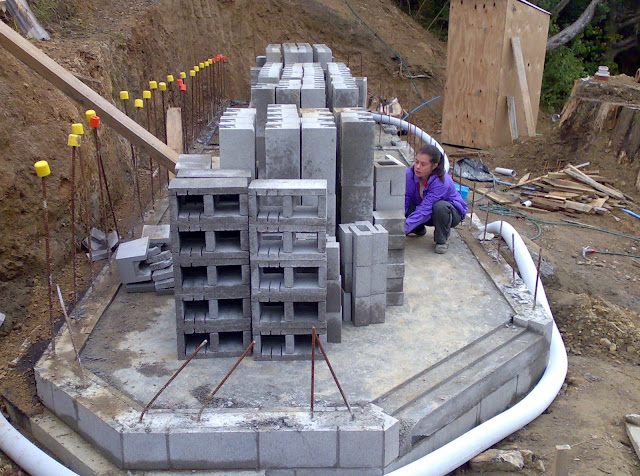 Cliff & crew have moved some of the beams up out of the gulley, courtesy of ropes, pulleys, and Mighty Mouse the 1950-something Holder tractor. These are bloody huge bits of wood, so huge that they exceeded the capability of my camera to cope. So instead I tested the new planer on the chain-saw cut surfaces. result – nice: 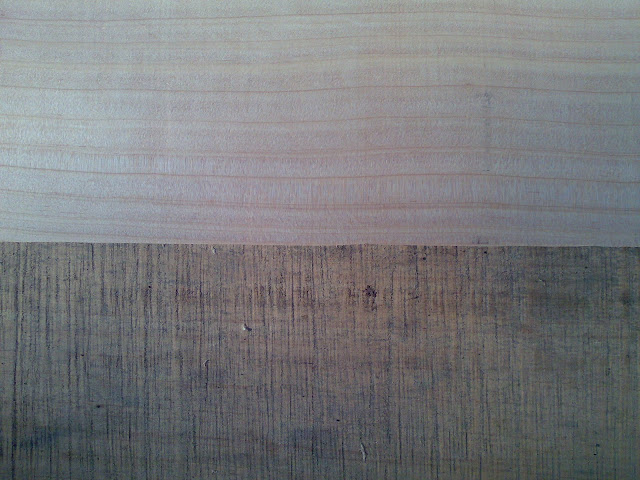 Oh, and there was more loading of the Mitochondrial memory with shiny patterns, snuggling at Rich’s go-away do, training, tidying, and all the little things that you do once you’re over a cold and have stuff to be getting on with.

(Where “doing something about” means some form of pricing of carbon, whether through the ETS or not)

There’s ongoing arguments about this amongst NZ economists and modellers. Most of this depends upon the assumptions you make about policies in the rest of the world, about how rapidly higher prices change what people buy, and how farmers farm. Previous models have given a wide range of answers, from “it’ll be the doom of NZ” to “it might be just fine”. Some of the previous models have been pretty widely panned.

To cut through all this crap, MfE told two of the main modelling to sit down together, play nice, and agree on some numbers. These numbers are still predictions, but they’re more valid than any previous ones. And the conclusion is:

So rather than being $17.5k richer in sixteen years time, yer average New Zealander may be $15k richer. Obviously, there should be error bars on this prediction, whether that’s the price of oil changing, or the exchange rate, or a few years of good weather for farming or bad, but it seems a passable conclusion that the effect will be small but negative. Is that acceptable?

(All this ignores the potential cost of extreme events, droughts, Katrinas and the rest, coz economic models have a hard time with that kind of thing. That’s a bugger, coz the financial damage from extreme events may make this kind of modelling a pointless waste of time, but I digress…)

So the pics of me in Filament have been viewed by seemingly half of Wellington. It’s nothing that anyone at Kiwiburn/fire spinning wouldn’t have seen*, but it’s in the context of being explicitly there for to be lusted after. For me that remains a pretty abstract state. Both aesthetics and other people’s opinions remain near the bottom of things I care about.

Putting the photos together was a novel experience but given that it was Wellington waterfront at night, in the wind, trying to stand very still, my main memory is of being bloody freezing.

The interview was pretty brief, and it was a conscious decision to talk more about my work, than who I am. Coz if I’ve got a platform then I’m going to talk about what I think is important, the contents of my head being somewhat less important than convincing everyone else to get on with saving the world.

(And maybe just a little coz I’m shy…)

But yeah, it could have been longer, but one the third hand, I like to read far more than most people.

I’d have chosen some of the other photos, but then again, I’m not the target audience. Still, there may have to be some printing and framing of said pics, for hanging on the wall to flaunt achieving this, rather than hotness.

* – actually, you’d have seen much more of me at Kiwiburn, but that’s Kiwiburn for you, a hotbed of depravity/hugging/noise/sunburn/curry/kayaks/clipboards/jiggling (please delete as appropriate)

Oh Gordon, how did it all go so wrong?

Thatcherism, by Gordon Brown, published in the London Review of Books, 2 February 1989:
“a naive yearning for the simplicities of an Arcadian marketplace unspoiled even by the sinister insights of the historical Adam Smith. The appeal is broad but superficial: Thatcherism is designed for an older, simpler world that never actually existed.”

And coz this is LRB, there’s bonus snark:
“Gordon Brown is, for now, the prime minister. He was in the shadow cabinet when he wrote his pieces for the London Review.”

And as for the recent UK elections:
“For every person who voted BNP, 29 did not vote at all.”

‘…is to clowning what Cirque du Soleil is to the circus…’

We’re going to see it on Friday, 10th July at the St James. Who else is keen? Let us know by the end of today and we’ll hold tickets for you.

We’re ready to pour the floor slab for the workshop. For the Kiwi’s here, the white stuff in the pic is what the rest of the world calls insulation. It’s a good idea. You should get yourself some. That way your house won’t be freezing cold every morning.

Much as I’d like to be bolting machinery down to bedrock, this slab will be 100 mm thick and should prove fairly solid. Milling machine and lathe will go to the left, welding bay at the end, big bench, assorted gubbins and windows to the right. 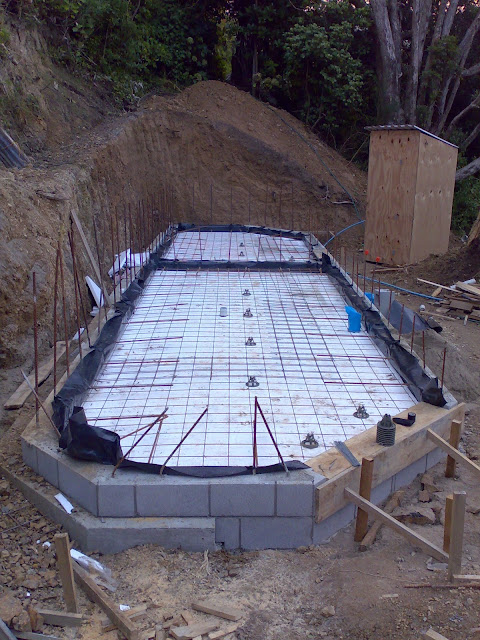 And today’s scenic view is Te Apiti wind farm, east of Palmerston North. There is now getting on for two hundred and eighty wind turbines above the Manawatu Gorge. Yay for progress.

Greenpeace has a push for NZ to sign on to a 40% cut in greenhouse gas emissions by 2020. Catherine Beard, from the Greenhouse Policy Coalition called this “unrealistic”. The Greenhouse Policy Coalition members include New Zealand Aluminium Smelters, Fonterra, Coal Association, Carter Holt Harvey, and Solid Energy, i.e. the usual suspects bearing some responsibility for the lack of any real action on climate change in NZ.

Robyn Malcolm has an awesome article in Stuff, in response to Catherine Beard. I so wish I’d come up with this beautiful line:

‘Martin Luther King didn’t begin one of the most famous speeches in history with “I had a dream . . . but it was a bit unrealistic”.’