The team that set the land speed record and built the first and only supersonic car have a new project – 1,000 mph.

It has an eight hundred horsepower V12 engine, just as a fuel pump for the hybrid rocket.

As of now, I am officially drooling.

There’s questions as to where they can run it at full whack – “In light of this impressive record, surely BLOODHOUND will return to the Black Rock Desert? Sadly, no. A lack of rain over the last decade, together with increasingly heavy use for the playa surface (principly by the annual Burning Man festival) has left the Black Rock surface in poor condition. It is bumpy, crumbly, rutted and uneven…” Leave No Trace my arse.

Note to self – always remember to include the line of code that makes the Mitochondrion work five times faster.

Canada, still nice and boring, thanks to effective financial regulation.

Chase me, ladies, I’m in the cavalry – “I had my first jujitsu class today, to prepare for a future of fighting for bread crusts and potato peelings.”

The new adventures of Sigmund Freud

Err… WTF? Christ and Hemingway, together at last.

“Chartism was of course a monumental failure, with only the vast majority of their goals being common-place practices today.”

“I wish they all could be dystopian girls”

[EDIT – how could I have forgotten this one:

I broke the double mini-trampoline at gymnastics on saturday. It broke as I was taking off for a front flip, causing some heart-in-mouth action.

But this tramp has broken six times, been fixed six, and this was my first bounce on it. So not a good fix, which is a bugger, coz I like flying off it. So while everyone else did something else at gym, I sat down, stared at it, and worked out what was wrong.

There may have been diagrams of forces, coz I used to be able to do this in my head, but I’m a tad rusty.

Last night, I rocked up with a bag of parts and tools, sat down and fixed it. Fundamentally, it needed two attachment points moved, so I could fit longer chains, at a better angle, with less leverage.

So far, it’s survived me bouncing on it. It is stronger. I’m not going to say it’s fixed, not for a fair few months of adult classes, but it’s better than it was.

And jumping up and down on it reminded me of how much I love being an engineer. So tell me, why am I a bureaucrat?

Anyway, on the way back, it might have been END_OF_DOCUMENT_TOKEN_TO_BE_REPLACED

We are forced to pay too much tax! Us poor, oppressed, hard-working businessmen/workers/farmers/housewives/voters have suffered for too long under this tyranny!

Actually, no. The OECD’s annual Revenue Statistics reveal that… the OECD is crushingly boring. To save you having to read all that, have a graph instead: 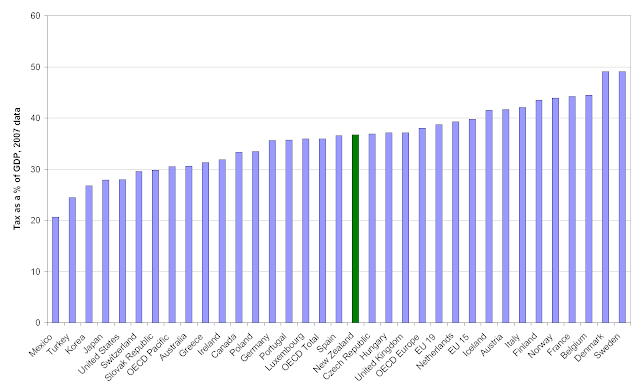 So our taxes are pretty slap bang in the middle.

But, but, but… we’re living in a nation of corruption!

Anyway, in news from the rest of the world:

“With unemployment expected to reach three million by the end of next year, economists were last night warning of Billy Bragg.”

Economists find a new proxy measure of social and economic hard times – “In the current study, facial and body characteristics of Playboy Playmates of the Year from 1960-2000 were identified and investigated to explore their relationships with U.S. social and economic factors”. (Here’s the data, and I can’t believe that I have to say this about econometric data, but it’s SFW.)

Well, for your education, Dr Science has investigated this empirically. Here’s what psytrance looks like through an osciloscope*: 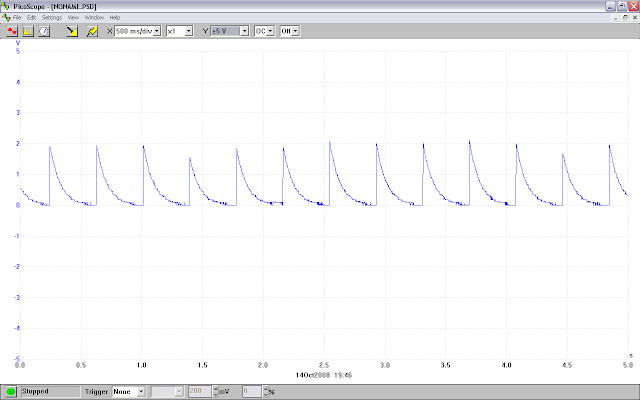 From which we can conclude – psytrance is just repetitive beeping noises (at 155 bpm).

Tune in next week, when we’ll be investigating the claim – modern music, you just can’t hear the words, can you?

* There may have been some signal processing here, but not much.

Everyone should go see Adagio, Deb Pope’s latest production at Downstage. See it coz it is sexy, funny, scattered and intimate.

(And the performers are also damn good at making me drink vodka slammers, but that’s another story…)

I know that Brooklyn isn’t exactly pirate central, but doesn’t that make it the perfect place to bury pirate treasure? Yet after ten hours of digging this ******* trench, have I found any booty?

Old glass bottles, one brush head, many, many two-inch squares of glass, yup. Treasure? No.

In other news, trench still not finished. In some places, there’s 400 mm of rock to get through. Arse. 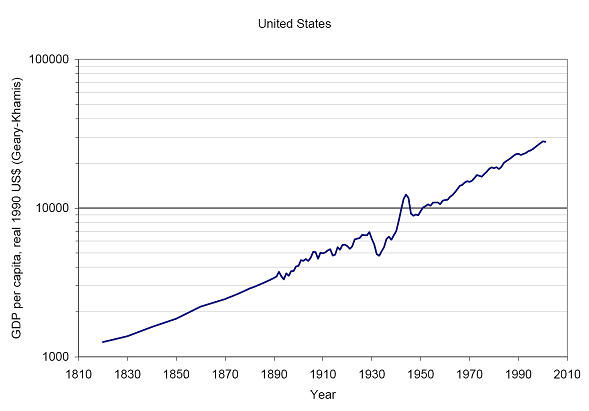 This is the US’s economic growth, per person, over the past two hundred years. The curves for the rest of the West are similar. They all go up, endlessly, relentlessly up. Yeah, there’s some wiggles. We’re having one right now. It’s just a wiggle.

When you’ve got a system with behaviour like this, that’s so consistent over the long run, then the explanation for the behaviour is most likely to be outside of the system. Mainly, growth isn’t caused by finance or investment, or by this law or that law, or by regulation or less regulation. It’s caused by technological progress, purely and simply.

1.8% productivity growth per year, year on year, for centuries. The wealth of our civilisation doubles every 39 years. It shows no sign of stopping.

James R. Flynn, who manages to offend everybody, has a new book out, “Where Have all the Liberals Gone?“.

He tends to get people’s backs up for pointing out that, for example, blacks in America have lower IQs than whites. This finding has been used by the right wing to point to genetic inferiority (“The Bell Curve” being the obvious, odious example). Flynn starts with this finding, points out a whole bunch more facts and comes to entirely the opposite conclusion, with entirely the opposite political position.

The book is long and I haven’t read it, but here’s a summary.

And if you didn’t see his piece in the weekend’s papers, it’s worth a read, purely for having more backbone than most on the left:

“The right-wing image of the world is absurd: America is safer than at any other time over the past 80 years… But all the Right has to do is shout “national security’ or “terror” or “Israel” and the liberals cave in.”

Building a house involves a whole new level of screw-ups. We’ve just received a quote for installing the electricity from up the pole to by the road, where our sparkie can hook in.

Price? Forty-one thousand dollars. I think they got that wrong.

And we’ve also just received an invoice for a “panting survey”. I think they got that wrong too.

Aside from that, now for manual labour.

I’ve a nagging feeling that the answer to this will either be bleedin obvious, or impossible.

How do I implement a logical operation with the truth table:

Context: There’s lots of low-level bit banging in the Mitochondrion. I want to use a byte mask to set particular bit values in another byte. Turning a bit on is easy, just OR it with a mask containing just that bit. For example, to turn on the third bit in 00×0000, just OR with 0010000, not caring what x is to start with.

Turning that third bit off, ummm, dunno. Can’t get my head round it.