Maxim make a most funky, tiny little one-chip, any voltage in, five Volts out power supply. It’s tiny (10 mm by 4 mm) and does everything ever that a power supply could need to do. Nearly.

The usual NZ stockists don’t stock it. Ordering it from the US will be pricey. But hey, Maxim normally sell these things by the thousand, and give out samples of ones and twos for free, in case I need thousands later. So I send off my request for samples to the NZ distributor and … hear nothing back. For a while. Oh woe is me.

Meanwhile, I’ve found that one of the bigger US stockists now does NZ ordering. The kit still comes from the US, but shipping and min order is much less, I guess coz they can bundle up a whole day’s worth of orders and send it in one box to here. After a few weeks, I give in, wave the credit card at them and two nice, shiny MAX710 chips are ordered. You can see where this is going, yup.

The ones I’d paid for arrived at home yesturday. As did the free samples.

I know I’m being petulant to be ungrateful for free stuff. But hey, it’s my birthday on friday, whereupon I get to be utterly, astoundingly, tediously petulant, coz it’s my birthday, dammit. So I’m just getting in practise, ok?

Pray tell me, interweb, what it means when, in my dream, I’m driving a van down a bus lane on Oxford Road, Reading, England, the traffic is bad but flowing, yet cars, pedestrians and skaters keep narrowly avoiding splattering themselves across the front of the van, why, oh mysterious sub-concious, why oh why oh why was the van left hand drive?

I’d thought about writing a post about Investigate’s idiotic cover story, but didn’t bother, as it’s so ludicrous that no-one could get taken in by their half-truths. Well, sadly I was wrong. From the Dom Post yesturday:
Fire starts near flat’s light bulb

Ffs! Still, thanks to the interweb, there’s already others mocking them: Fear ncertaintly and doubt, morning edition
“Strange how much of the country has been using the new bulbs for years without any problems and as soon as the government makes ’em compulsory they start bursting into flames and blowing up buildings.”

I’ll explain it very simply: anything electrical can get hot and start a fire. The more efficient it is, the less hot it gets.

Ah f’it, let’s take the satire all the way to the top:
Eco Bulbs involved in double murder

In other news, here’s the official, approved and certified method for making tea: “The British Standard Method for Preparation of a Liquor of Tea for Use in Sensory Tests“. Strictly speaking, it’s also an ISO standard. Does this mean there’s a shadowy global conspiracy to control our brains and morals by forcing us to make tea using only the approved method? If you’re an Investigate journalist, then probably. Also, tea has 1080 in it, so it’s pretty guaranteed, one cup could be fatal!
(This message brought to you by our sponsors, Concerned Citizens for Coffee and Righteousness)

[EDIT – bumped coz:
1) Youtube took 5 days to post it
2) There’s been too much emotional challenge in the last week, some good, mostly bad, so f’it, here’s something funny.] 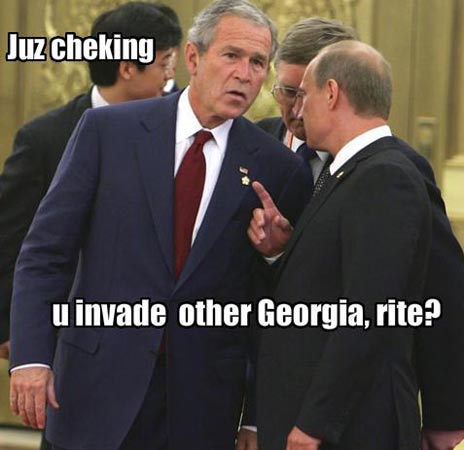 I saw prarie dogs!
They were REALLY cute!

And then I saw the fox catch and eat a prarie dog!
It was, ummm … yeah.”

“Thomas Friedman once said that no country with a McDonald’s had gone to war with another. However, the “Golden Arches Theory of Conflict Prevention” is not strictly true. Careful historians point to the 1989 United States invasion of Panama, NATO’s bombing of Serbia in 1999, the 2006 Lebanon War, and the 2008 South Ossetia War as exceptions.”

This is sad. Also, expensive. SpaceX are trying to build a cheap two-stage satellite launcher, the Falcon 1. First stage powers the rocket half way up (give or take), then gets dropped and second stage takes over. Their third launch attempt went wrong at the stage separation. See if you can spot what went wrong from their launch video:

…from which we can only conclude that architects, all of them, smoke far too much dope.

(Just for once, I’m not complaining about the house. That’s beyond the architect stage, and thus progressing far more smoothly than it was.)

The Mitochondrion, Mark 3 is pushing the hardware I’m using to the limit. And there isn’t better hardware, or there wasn’t when I started. But there’s a new driver chip, and my brain won’t leave it alone. With a bit of this, and a bit of that, it’s looking like the Mark 4 could do four times the power density, 32 times the bandwidth. And PWM at 100 kHz, not 150 Hz, coz frankly, 150 Hz is not good enough.

Ok, so I’d need to solder 0.5 mm spacing pins, but that’s not impossible, just hard. Fitting everything in is hard, but feasible. The extra wiring requires a four-layer board, but I think I’ve thought of a way to fake it. The batteries I’d need, I haven’t found yet, but they’re not physically impossible.

And I’ll need a microcontroller with at least 40 times more computational grunt than the current one, so a Picaxe is right out. Anything using interpreted code is out. Changing that means learning a whole new development environment, and probably a harder one at that. Hmm… anyone know if I can get 320 kB/sec out of an Arduino and into an Fast-mode Plus I2C bus? Brief reading of forums suggests that it maxes out at 50 kB/sec on serial lines, in which case I might have to end up with an ARM…

Crap. I shall stop this thinking, and get back to getting the Mark 3 to behave.

[EDIT – Failed to stop thinking, just worked out how to do sense 2 much better. This also frees up space in one of the most constrained areas. This is looking better and better. Damn.]