“Engines this large cannot simply be built, and instead are germinated in a nutrient rich sludge medium.”

END_OF_DOCUMENT_TOKEN_TO_BE_REPLACED

Nightwatch had rocket-powered trucks, Russian vampires pulling out their own spines to use as swords, and running with scissors.

The sequel Daywatch will be at the Embassy, 26 & 27th July. I’m gonna. Anyone else? I will ask again nearer the time.

When a project was a failure due to X, don’t say:
“Yeah, we screwed it up coz of X.”
Say:
“The operational experience proved the importance of recognising X as a key success criteria.”

Also, at any point, about anything, you can say:
“The role is to clear barriers to progress by initiating a variety of actions.”

“If I’m going to try and write hard-SF, I’d rather get it right than risk tripping into a puddle of vacuous misconceptions and mistaking it for a universe of possibilities.” – which is a philosophy with more broad application.

And hurrah for digital controls. Tunes start 20 seconds in. You need sound for this one. Of course, to replicate what this would truly sound like, you either need an astoundingly powerful pair of electrostatic speakers, or the thing itself.

So my head bounced off the shoulder of other guy, landed on my hands and knees and was about to get up and get on with it, when I noticed the blood dripping down onto the inside of my visor. Hmm… time to skate to the bench. 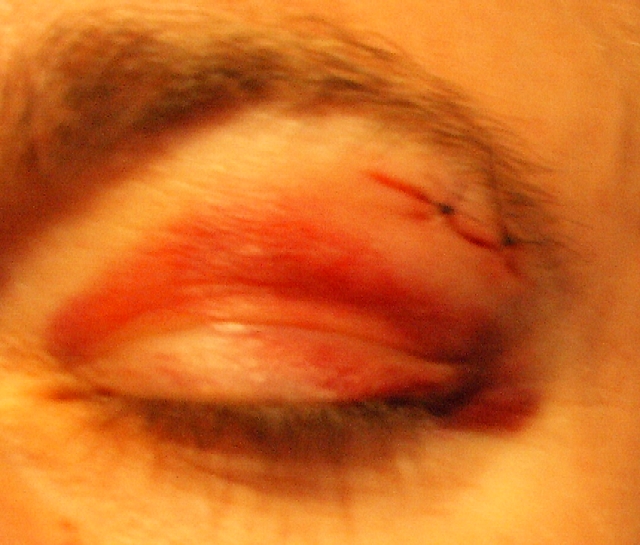 Yes, its Goth Makeup time! Hockey players are all secret goths, to our shame. Anyway, two stitches, and then played the game after. Not as colourful as the last time. Team still unbeaten this season.

Vanity, thy name is blog. tatjna posts vids of her looking slinky, I post bruises and breadboards full of home-built electronics.

My life had reached a steady state, where I had what I needed, what I needed hadn’t changed and I just hadn’t shopped for ages. Sadly, I need to buy a new helmet. The one I have is slightly too big and I think that if it fitted properly, I wouldn’t have bled. Of course, that’s merely an assertation unbacked by evidence, so I’m going to have to get a decent helmet and then test it by running full whack at people bigger than me…

The short answer: vehicles running off lithium batteries are much, much better than vehicles burning petrol.

END_OF_DOCUMENT_TOKEN_TO_BE_REPLACED

The Saturn moon rocket, at full chat, produced about 3% of the entire world’s power. Yup, every coal power stations, nuclear power plant, hydro dams, every car engine, every jet on every plane, all added up, that’s numbers in the teraWatts. And one machine made 3% of that (admittedly, only for two and a half minutes).

The engines used 5000 litres of fuel each second.

Anyway, this being the 21st Century, here’s this:

What? Me? The smelly dread-locked tree-hugging hippy posting about a car? Especially one that does 0-100 in 4 seconds, top speed of “I’m sorry Sir, you’re not allowed to do that”, and looks just slinky, like the sexiest Jag that they never got around to building.

Yeah, its electric, lithium batteries, 400 kms range, $1 of electricity will fill the tank. When I have my mid-life crisis, I’m going to get one. Luckily, they’ll be available in 2008.

(Also, it doesn’t have brakes. Slows down solely by using the motors in reverse.)

This was painted on the blast door of a US nuclear missile bunker: 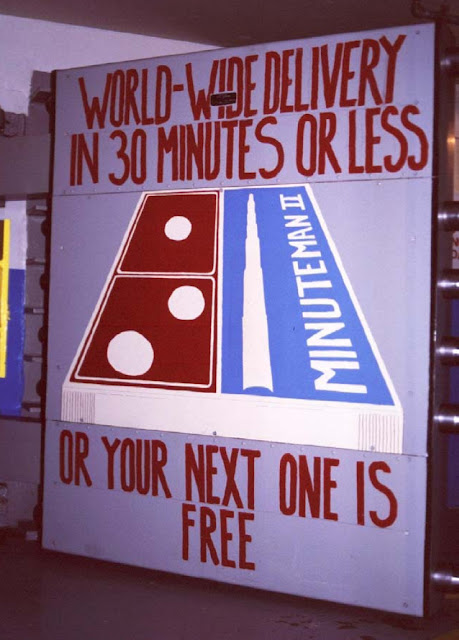 I am glad to see capitalism repurposing this technology to a better end – intercontinental ballistic pizza delivery.

(As ever, George Orwell said it best, in a few simple words.)

And yesterday’s capacitor problem – I worked out how to solve it in software instead, but doesn’t everyone do that these days? (Okay, its less EMP resistant, but isn’t everything these days? *)

* – Actually, no, anything connected to mains power is probably screwed, coz the thousand kilometres of power cable make a great antenna for picking up EMPs. If it fits in your pocket, no antenna, probably pretty resistant. And everything fits in your pocket these days. Thus ends the lecture on my particular neurosis.

This is persisting in almost working:

Which means its not working.

Also:
im in ur dezrt
teh drugz just kciked in
i can haz merkin dream?