I tried videoing OST-OF! Even with fancy camera, it just doesn’t work, coz its designed for human eyes, not mechanical ones. So instead, here’s me. Me! Half-way through the Karapoti, hence only two-thirds broken. 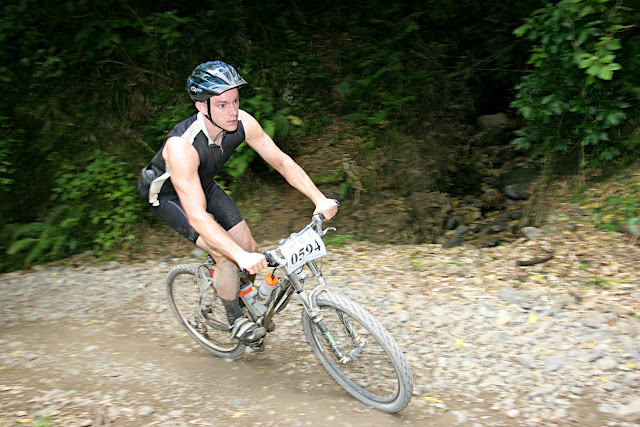 Continuing my post-whorage this month, here’s an aerials vid of Sharm, who started aerials at the same time as us, performing in Las Vegas at this show, and shortly off to join this circus in the UK. SFW, unless they’re really up tight.

END_OF_DOCUMENT_TOKEN_TO_BE_REPLACED

And a 2.5kW continuous wave neodymium:YAG laser? I want. You can even see how they defocused the beam, otherwise you’d get coffee going everywhere.

(And yes, the approx ~2% efficiency of a Nd:YAG laser means that for a 2.5 KW laser, you’ve got 125 kW of waste heat to get rid off, so you’d be better off making your tea out of the hundred-kettle’s worth of hot water coming out of the back of the laser cooler, but would that be sweet? No, it wouldn’t, and I speak as an expert in these matters.)

Well, I don’t know about the rest of you, but I had a very tiring weekend.

Too much of all three.

All the cool kids might be heading to Auckland, but I’m going to the Cross. 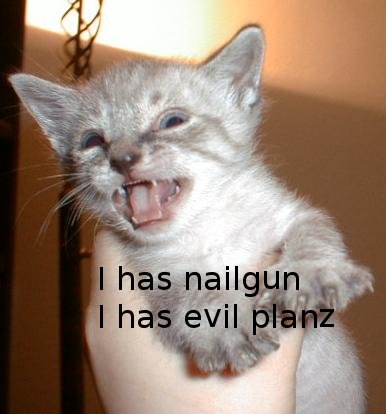 and by I, I mean we, but its damn hard to find a pic of two cats looking evil together…

I’ve finally realised why I like Le Tigre, despite their whininess. Its coz they are Carter the Unstoppable Sex Machine, fifteen years later, female and American.

(this thought stolen from here)

END_OF_DOCUMENT_TOKEN_TO_BE_REPLACED

This is the most bad-arse thing in the world. In fact, in all of history:

END_OF_DOCUMENT_TOKEN_TO_BE_REPLACED

As seen today in someone else’s strategy:

“Our vision is for a strategy that will secure a future that meets our aspirations.”

On the bus this morn:
“If you were a vengeful God, how would you smite?”
“With giant balls of molten puppies.”

Anyway, Hot Fuzz, at the Embassy, 8 pm sunday? Otherwise it is the hell that is Reading.

This morning, walking along by a busy road in the rain, head down, hood up, tunes on, I could have been in England. Damn you, Arctic Monkeys!

Except I wasn’t really miserable.

If you’ve pics of Aeroterra at Gravity and Other Myths, I want them. Contact me for details how. Coz I don’t want another Thunderdome Grudge Match catastrophe. Maybe I should provide smelling salts every time I take my shirt off, coz there seems to be lots of swooning going on in the cheap seats at the back.

Also, yes, I am postwhoring today.

Where would one go in Wellington, shopwise, to fondle laptops?

And where on the NZ interwebs would one buy one? (The fondle/buy distinction being rather important in these days of commerce at light speed, or whatever we’ve reached now.)

Also, can anyone give me a quick guide to laptop processors right now? Which ones are faster? Back in my day, we just looked at GHz and told us all we needed to know. (Actually, I remember looking at MHz, and not very many of them either.)

As part of my “doing nothing” project, I’m gonna go see movies. These movies:

300 – a review said its like “just ass kicking that kicks ass that, while said ass is getting kicked, is kicking yet more ass that’s hitting someone’s balls with a hammer made of ice but the ice is frozen whiskey.”

Also, its old, so its cultural. And when told that the Persian arrows would be so numerous as “to blot out the sun”, Dienekes replied “So much the better, we shall fight in the shade”, which is possibly the most bad-arse thing that anyone has said, ever.

Hot Fuzz – from the Shawn of the Dead people, so a must.

Hot Fuzz released this weekend, 300 at start of April. Who’s in?

For those of you who mocked my plans to do nothing at all today, hah! My slackness was awesome.

Although, it might have been assisted by the Gravity and Other Myths end-of-run party, which didn’t start until after we’d taken down the rig and packed out. Then there was much dancing and getting to bed after 5. Oops. Well, that’s what I said in the morn.

And by nothing at all, I mean only a few hours of hammering. Relatively, that’s couchdom all day.

I’m happy to hear feedback, coz you might think its good, but I want it to be better.

When I cook, I start by chopping vegetables. And what with being a materials sci geek, there’s only one kind of knife for me, the Kyocera ceramic ones. The white ones that look like plastic, until people cut themselves. And I have one, bought it in Japan, so 7 years old, never sharpened it, still frighteningly sharp. So I was most upset when a flatmate, who is lovely, but just a little clumsy with her hands, managed to break the tip off it.

So what did tieke bring back from her stilting trip to Hong Kong? I mean, aside from the Hello Kitty instant noodles? Yes: 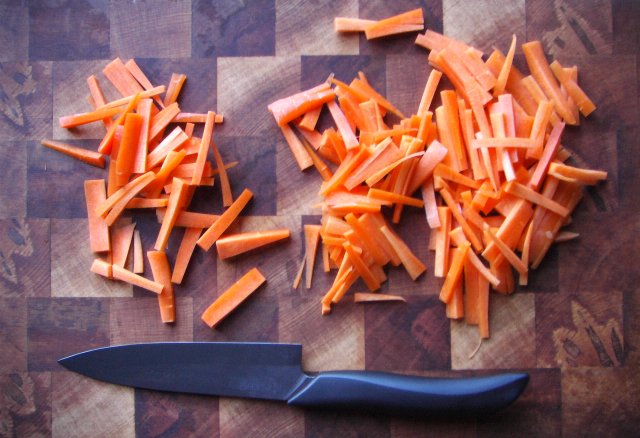 Yes. And the more observant amongst you will notice that its black, not white. This is one of the hot isostatic pressed ones, which are even better.

Airbus is cutting 10,000 jobs. They only employ 50,000. Why the cuts? Coz of delays in making their A380 superjumbo. Why is it delayed? Apparently, coz the wiring has problems. What are these problems? Apparently, parts designed and built in one country don’t fit with parts designed and built in another country. But surely, in this information age, where information technology breaks down barriers and helps us all speak, work and think in harmony, surely a trivial problem like this should be solved in a flash?

Well, it seems there’s a problem with their software. The engineers amongst us will have heard of AutoCAD, which is the standard CAD software that engineers use to draw in 3D and design everything they make. Airbus doesn’t use that. They use Catia, from Dassault. Imagine if AutoCAD (which costs something like $7000) was MS Paint. Catia is Photoshop. It costs silly money. Catia isn’t just a design package, it’ll tell you if you’ve made it too weak, where you’ve made it too strong, hell, probably even what colours would look best depending on whether you’re designing something to go outdoors or in.

And yes, engineers in one country where using Catia version 4. Engineers in another, version 5. Airbus decided that upgrading, and retraining, was too expensive. The cost of delays to production are estimated at nearly ten billion dollars.

I have stuff to write about, but that requires thinking, so instead, its not-Caturday:

Also, there’s nothing like carrying a USB drive in your mouth to make you feel like Nimrod, the Mighty Hunter.

END_OF_DOCUMENT_TOKEN_TO_BE_REPLACED

From Tv1, here’s the coverage. And good coverage it is too.

And, courtesy of tatjna, here’s me looking broken: 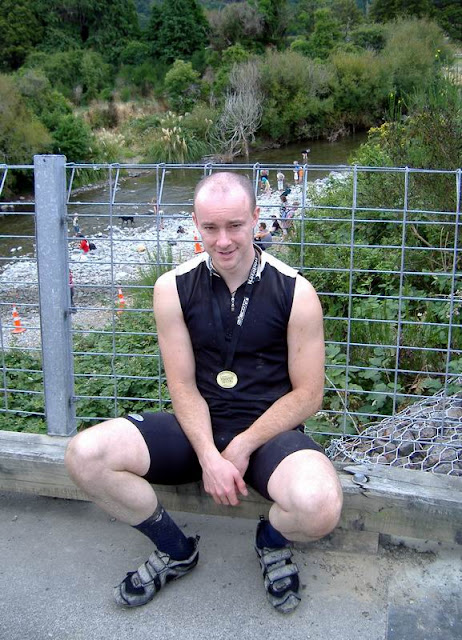