“Word got out I was banged up in hospital and Saul Albert of wirelesslondon.info rocked up with two laptops, a 12V car jumpstart battery, a directional wifi antenna, and reams of various cables.”

END_OF_DOCUMENT_TOKEN_TO_BE_REPLACED

“Alan Turing famously codified the Turing test which was sort of an early drinking game for in-the-closet British gays, back when homosexuality was illegal in the UK.”
A Tough Guide to the Rapture of the Nerds

“He used to smear a tree behind his Silver Spring home with a mixture of peanut butter and Valium and then tattoo the squirrels that he found passed out below.”
Goth squirrels

So Revenge of the Sulky sucked big monkeys. But it looked pretty and stuff blew up.

Maui, on the other hand, was most fantastic and spectacular. Go see. Go see now!

And compiled on the way home, theatre projects that just wouldn’t work:

Its a little frightening when you’re googling for something utterly random1, something pops up and you think:
“hmm… looks interesting”
And then you read it and think:
“this looks familiar”
And then you remember that you wrote it, six months ago.

Anyway, have had enough of maintaining a dialoging process to enhance the ongoing strategic redefinition of the evaluative exercise2, ama going to K shortly.

David Hasselhoff calls his agent and demands, “I want everyone to call me The Hoff from now on.”
His agent replies “Sure! No hassle.”

Anyway, no aerials practise this saturday, coz most of Wellington’s professional aerialists are performing in Maui. So go see Maui instead!

Or do lots of press-ups.

You know that you’re going native when you find yourself at a seminar on innovation in electric fencing. And you find it really interesting.

You know you’re getting old and sad, pipe and slippers styleee, when you’re really pleased to get the Budget. The whole thing, all 3000 plus pages. Its exciting, really, it is. Lots of money for scientists and universities. It is a good budget, with much carrots and satisfaction.

Though sadly no special rapid-response fund for supporting masters students in religious studies. Treasury probably caned that one, coz Treasury are evil and drink the blood of kittens.

Both my beloved Pilot Hi-Tecpoint V5 Extra Fine green pens are dying, consumed by my lust, or something dubious like that.

But where in town to get new ones? Whitcoulls on Lambton Q has many pens but no green, the Whitcoulls in Reading doesn’t have any Hi-Tecpoints, curse their tinsel-draped souls. The busy magazine shop at the station end of Lambton Q has a surprising variety of pens for a tiny shop, but still no green. Can anyone give me some pointers to the best pen shops in town?

Coz hard things are fun, though this wasn’t too hard, just a case of get on, fall off, get on again. 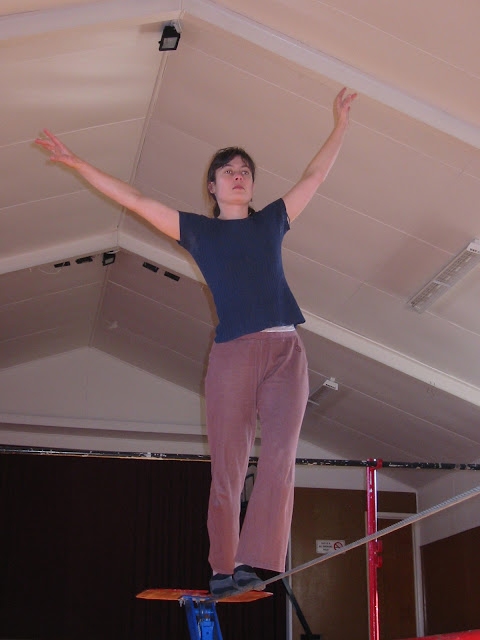 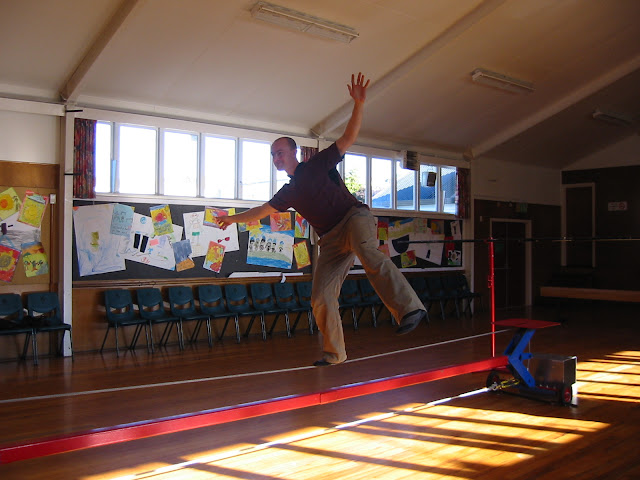 Strangely, I can balance with arms and legs everywhere but where they’re supposed to be. Anyway, both managed walking backwards and stepping through 180. Pulled off a 180 without stepping my feet, but that was more desperate failing than grace. Me wobbles lots.

But it is fun, and shall do more tomorrow.

Randomness, as notabouthim hasn’t yet:
We need more like John Francis. The no-cars thing, not the silence, that is.

*is tempted*
*thinks of snowboarding*
*arse* 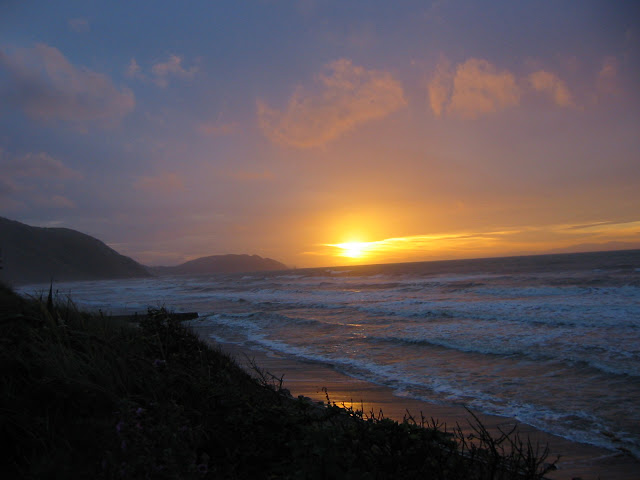 Aside from that, no aerials class tomorrow for you budding aerialists. But there is a wire-walking workshop this weekend, for anyone interested. The wire is very low. I am hoping flu goes away for tomorrow, or I shall be livid.

1) True or false: Jez gets all the girls?
False. Jez is entirely unaware of the effect he has on people, and is thus desired for that. Were he to become aware, he might try to take advantage of it, and then it would have entirely the opposite effect. Just like Cassandra’s, this is a spectacularly useless superpower.

2) Are you really Batman?
If I was, I wouldn’t want to blow my cover, so I would deny it. So yes, I am Batman. Now, where’s my black leather codpiece gone?

3) Why did you decide to join the circus?
Coz doing hard things is fun. And no-one’s going to be that impressed by your awesome sofa-sitting skills.

5) And did you, in your formative years, learn to love the bomb?
In the 1980s, the Soviets had somewhere between six and nine targets within 15 km of my home. Targets worth a megaton nuke each, which gives an ‘everybody dead’ radius of nearly 3 km, and a ‘most people dead’ radius of 7 km. So bit of an overlap there.

Love isn’t quite the right word, how about learned to expect evaporation if lucky, tedious and agonising death of self and everyone I’d known if not.

Don’t know how you love, honey, but if love involves an expectation of the gravest consequences, then you can keep it.

This weekend, a tightwire walking workshop. Coz doing hard things is fun.

In Newtown, 10-4, sat and sun, $20 per day. Email me if you’re interested. You’ll need shoes and stubbornness.

The UK election is turning out to be more interesting than expected1, but still pretty dull, the BBC’s UK election coverage is fantastic, and in particular, the news announcer’s2 ability to pronounce the names of constituencies like Caerphilly, Na h-Eilean an Iar, Blaenau Gwent, and Keighley, fills me with joy. And the regional accents from all over the country. Ooh, yes…

1 – the nazi scum of the British National Party doing worryingly well, but not a hope of winning any seats. Thank fvck, for once, for the first-past-the-post system.
2 – Peter Donaldson, doing this for 30 years, bless

This week the Government gave more details about the planned carbon tax, aimed at putting a price on carbon dioxide emissions.

The awareness of climate change in governments across the globe is a clear example of governments responding to rigorous work and solid evidence from the natural sciences.

However, will responses like the carbon tax work in practise? Here, we are on far less firm ground. The planet’s responses to our emissions are becoming fairly well understood. We are beginning to be able to say that if we double the carbon dioxide in the atmosphere, then we can predict the chances of particular climate changes. However, the responses of people and the economy to mitigative actions are far less well known. The understanding of these responses among social scientists and economists requires more research. This makes up the flip side of the coin in how humanity and the global climate interact and is just as serious a problem as the natural problem.

Because of this lack of understanding, researchers are limited in their ability to guide policy makers. There are many questions to be studied: around changing land use, measuring the nation’s carbon cycle, what changes people’s desires and their behaviour, and markets for emissions.

And for a specifically New Zealand research question – unlike most western nations, almost half of our greenhouse gas emissions are methane and nitrous oxides from agriculture, not carbon dioxide. Can we reduce this, aside from just getting rid of all our cows? NZ is supporting research into different pasture species, and possible additions to animal foods to reduce methane emissions, all questions for natural scientists. If this approach does work, then how should the costs and benefits of these solutions be distributed? That is another question for social scientists and economists.

Four, FOUR cents on a litre of petrol. Oh ffs! That’s going to make bugger all difference. No, we need something with muscle. Try UK petrol prices, $2 per litre. That might shift things a tad.

C20C is a subproject in ACC which is a stream in CLIVAR which is run by the WCRP which is a part of the WMO which is a body of the UN.

Damn climatologists, for doing important stuff but making it boring and incomprehensible.

George Farthing, an expatriate British man living in America, was recently diagnosed as clinically depressed, tanked up on anti depressants and scheduled for controversial Shock Therapy when doctors realized he wasn’t depressed at all – only British.

‘Not depressed, just British’ Mr Farthing, a British man whose characteristic pessimism and gloomy perspective were interpreted as serious clinical depression, was led on a nightmare journey through the American psychiatric system. Doctors described Farthing as suffering with Pervasive Negative Anticipation – a belief that everything will turn out for the worst, whether it’s trains arriving late, England’s chances at winning any international sports event or even his own prospects to get ahead in life and achieve his dreams.

“The satisfaction Mr Farthing seemed to get from his pessimism seemed particularly pathological,” reported the doctors.

“They put me on everything – Lithium, Prozac, St John’s Wort,” said Mr Farthing. “They even told me to sit in front of a big light for an hour a day or I’d become suicidal. I kept telling them this was all pointless and they said that it was exactly that sort of attitude that got me here in the first place.”

Running out of ideas, his doctors finally resorted to a course of “weapons grade MDMA”, the only noticeable effect of which was six hours of speedy repetitions of the phrases “mustn’t grumble” and “not too bad, really”.

It was then that Mr Farthing was referred to a psychotherapist.

“Suicidal?” Dr Isaac Horney explored Mr Farthing’s family history and couldn’t believe his ears. “His story of a childhood growing up in a grey little town where it rained every day, treeless streets of identical houses and passionately backing a football team who never won, seemed to be typical depressive ideation or false memory. Mr Farthing had six months of therapy but seemed to mainly want to talk about the weather – how miserable and cold it was in winter and later how difficult and hot it was in summer. I felt he wasn’t responding to therapy at all and so I recommended drastic action – namely ECT or shock treatment”.

“I was all strapped down on the table and they were about to put the rubber bit in my mouth when the psychiatric nurse picked up on my accent,” said Mr Farthing. “I remember her saying ‘Oh my God, I think we’re making a terrible mistake’.”

Nurse Alice Sheen was a big fan of British comedy giving her an understanding of the British psyche. “Classic comedy characters like Tony Hancock, Albert Steptoe and Frank Spencer are all hopeless cases with no chance of ever doing well or escaping their circumstances,” she explained to the baffled US medics. “That’s funny in Britain and is not seen as pathological at all.”

Identifying Mr Farthing as British changed his diagnosis from ‘clinical depression’ to ‘rather quaint and charming’ and he was immediately discharged from hospital, with a selection of brightly coloured leaflets and an “I love New York” T-shirt.